Bald is Beautiful: A letter for a fabulous girl by Carola Schmidt (Book Review)

“Bald is Beautiful: A letter for a fabulous girl” is an inspiring and lovely illustrated letter for girls of any age who will go or already are bald. It’s a perfect gift to send love to a powerful girl who needs to be reminded of how beautiful and loved she is. It’s not a book that explains scientific conditions, disease, and treatment. It’s about love, beauty, happiness, and friendship when going through various changes in our lives. 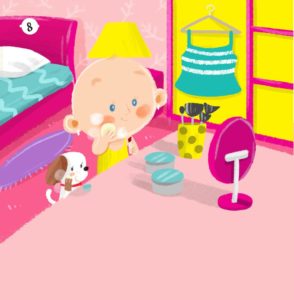 
My eleven-year-old daughter and I both took turns reading and writing down our thoughts regarding Bald is Beautiful.

We both agreed the illustrations were cute but geared towards younger viewers. My daughter said, “I can’t see an adult or older kid reading this book unless a younger person couldn’t read well yet. The pictures are a bit babyish.”

My daughter wasn’t familiar with a “hat and scarf party” but, after I explained what it was, Bald is Beautiful made more sense and was more enjoyable for her.

We both agree Bald is Beautiful was a cute book; however, my daughter thought it needed more words. There were a few pages with only illustrations.

The word cancer is scary, but I believe… we believe… this book will bring a smile to many young children facing cancer.

(Score issued by my eleven-year-old daughter.)

Carola Schmidt is a pediatric oncology pharmacist, as well as the author of children’s books about cancer and scientific books for Springer Nature. She is in the BookAuthority list of “81 Best Leukemia Books of All Time” with Chubby’s Tale: The true story of a teddy bear who beat cancer. She is also the author of the Babushka Series, which makes subjects as Holodomor and belonging simple for kids.
Twitter Link
About the illustrator:
Dian Ovieta is a children’s book illustrator who is really in love with anything about the children’s world. 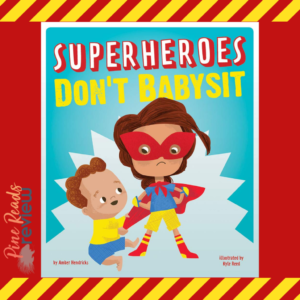 Superheroes leap buildings, chase bad guys, and save the city from the evil Emperor Zog. Superheroes DON’T babysit. Except when their dad asks them to. In an epic battle of sibling rivalry, will this superhero finally meet her match? Or will she find exactly what she’s been missing all along?

In Superheroes Don’t Babysit, author Amber Hendricks tells a story full of humor and heart, and illustrator Kyle Reed’s superpowered illustrations pack a punch with their bold colors and sharp lines. This book is fun to look at and to read with siblings who consider themselves rivals or friends, or maybe something in between.

~Art from inside Superheroes Don’t Babysit~ 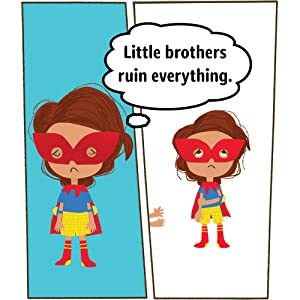 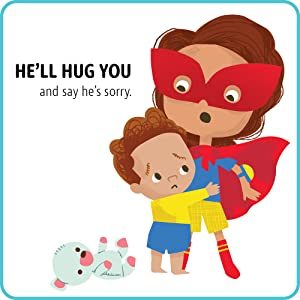 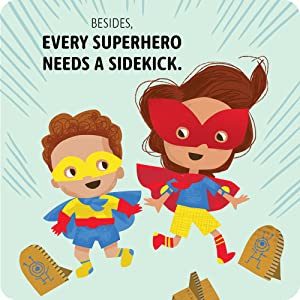 Amber Hendricks grew up reading everything she could get her hands on—including the morning cereal boxes. In addition to Superheroes Don’t Babysit, Amber is the author of Sophie and Little Star and two forthcoming picture books. She lives in Missouri with her husband and two children. 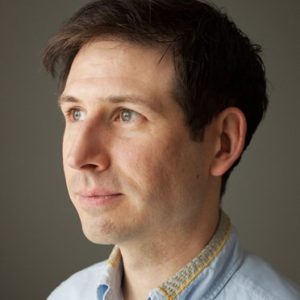 Kyle Reed is an illustrator whose work has appeared in children’s books, magazines, animation and advertising. He lives in Ontario, Canada. 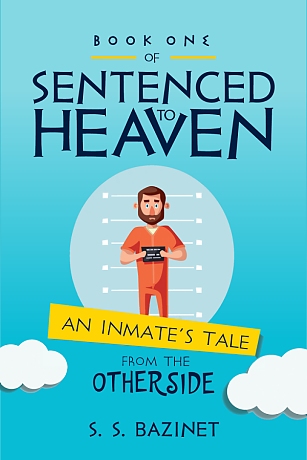 Alan’s been thrown out of hell. Now, no one will take him in except for Raphael, an angel who’s in charge of a part of heaven. Unfortunately for the unruly Alan, heaven is the last place he wants to be. To make matters worse, he’s going to have to stay there forever. He’s crushed when he learns that he’ll never be able to return to earth or anywhere else! But when Alan tries to buck heaven’s heavenly ways, he gets a lot more than he bargained for. For Alan, heaven turns out to be his worst nightmare. 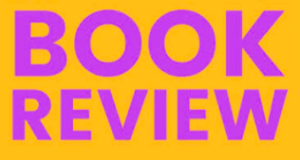 I can’t imagine anyone who would associate Heaven as a punishment, but Alan did. He was bored in Hell, but he’d rather be there than Heaven. Unfortunately, he did the impossible; he was thrown out of Hell due to the numerous complaints and the legendary riot.

Alan’s time in Heaven wasn’t too pleasant for him. Smells, sights, sounds annoyed him. In his defense, who would want a thunderous alarm going off every time you lied to yourself?! He didn’t just lie once or twice. No, we are talking about over 10,000 times. Crazy!

Alan’s journey to self-enlightenment was frustrating and entertaining. He had his own channel, and everyone was turning in to watch the Alan show. He didn’t find that so amusing. It was like The Truman Show but for the afterlife.

Love the plot, characters, theatrics… An Inmate’s Tale from the Other Side is an excellent read for a variety of ages. 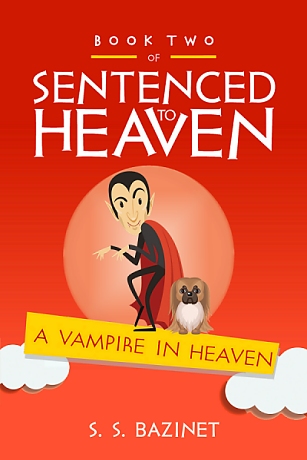 In book two, Alan’s misadventures in heaven continue. No one understands how he’s managed it, but his heavenly body has changed. He has actual blood coursing through his heavenly vessel, and he’s become addicted to the stuff. When he’s labeled a vampire, everyone becomes concerned that his condition could spread. As a result, heaven is placed under quarantine. Its pearly gates are closed until the mystery is solved. Fortunately, Alan gets help from unexpected sources, including heaven’s canine community. A little dog named Nippy becomes a friend that supports Alan as he tries to find a solution to his woes.

I’m going to list several items I loved about A Vampire in Heaven. I hope after reading my list, you’ll decide to purchase a kindle copy. 🙂

I liked the setup (plot) for book three. It should be a wild ride! 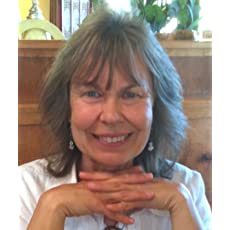 My fondest wish is that my stories entertain my readers and also provide them with moments of clarity and a deeper connection to themselves. My books include The Vampire Reclamation Project series, the Sentenced to Heaven series, as well as the YA thriller, My Brother’s Keeper, and a dystopian novel, Dying Takes It Out of You. 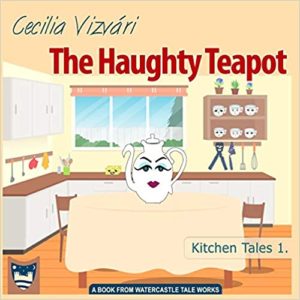 From the first part of the kitchen tales you learn how the most conceited teapot becomes the nicest and friendliest teapot in the world. Of course the tea cups, garlic press, cake-server, kitchen sponge, and not to be forgotten, the leftover chocolate sauce, also play their part.

In the second part of the Kitchen Tales we can read about how the Bashful Frying Pan started to sing for the first time. Why did he break into a song all of a sudden? What did the Haughty Teapot say, and what about the garlic press and the cake-server? Were they also surprised? Read the tale! 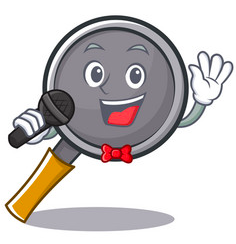 The Bashful Frying Pan was read by me (40+) and my daughter (11). Below are our thoughts on the story.

We love to have music playing while we cook. It makes dinner prep go by in a snap! Therefore, we enjoyed watching the kitchen helpers get into the groove. Adorable!

The overall storyline was cute. We didn’t have issues with it, but we did have some with the illustrations and dialogue based on the book’s recommended age level (3 – 12) and grade level (P – 5).

In my opinion, the illustrations were more geared for pre-k or first and second graders. My eleven-year-old thought the images were a bit creepy. She didn’t think kids her age would read this book.

We also agreed that not many younger kids would know some of the words as in their meaning, or pronunciation: (examples) ratatouille, exquisite, unprecedented, and haughty. She didn’t even know what haughty meant and, again, she’s eleven.

We’d still recommend this book to parents who have siblings in the 3-12 age bracket. The older child can help the younger sibling read and learn new words. 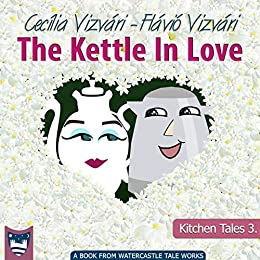 In the third part of the Kitchen Tales you will learn how the Kettle In Love has succeeded to win the heart of the Haughty Teapot.Remember, it’s not just anybody. He has to conquer the Haughty Teapot!!! It was also necessary for the spider to give good advice, with a lot of ingenuity and patience, until he was successful.I will not reveal the details, read the tale! 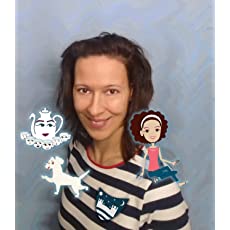 Cecília began writing stories and tales when her children were born. As the number of her children grew, the number of tales increased as well. The children discovered that it was great fun to invent new stories and tales, thus her older kids write and illustrate tales. Cecília’s smaller children only test stories. Since their name is Watercastle in English, they publish their tales under the name Watercastle Tale Works. The parents live with their five kids in Hungary. 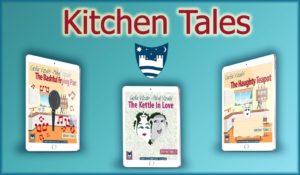 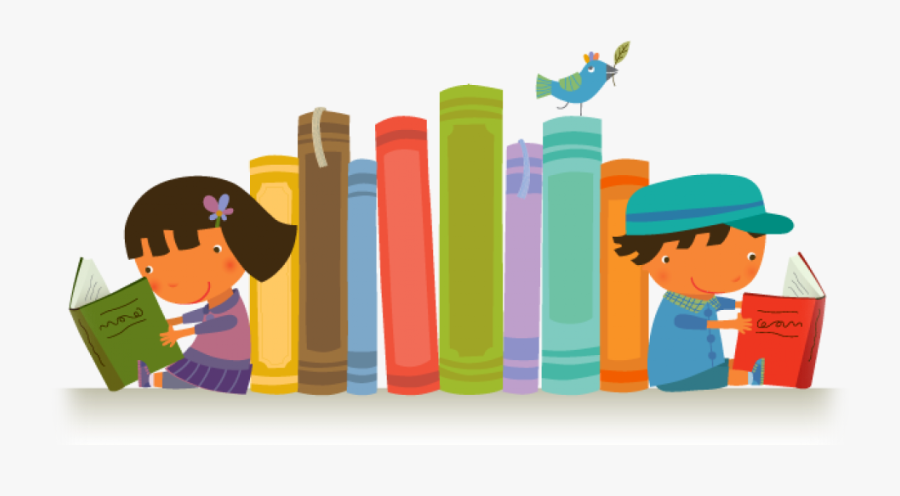 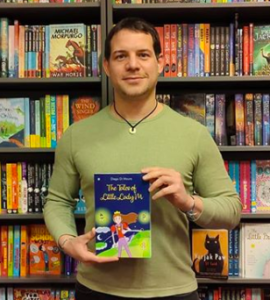 Hi, my name is Diego Di Mauro, and I was born in Catania, Italy.

“The Tales of Little Lady M” is my first published author and illustrator work.

A far kingdom hidden beyond the boundaries of imagination. A place where fantasy never sleeps, and dreams are much more than just a mind game. In that land inhabited by magic creatures and strewn with lost secrets, a little girl will begin a journey full of adventures and learnings. Always on a quest for knowing more, she will discover friendship, courage and the wonders behind an act of kindness. And that not everything is what it seems to be… In a far kingdom that only true dreamers can reach, a little lady will rise.

Cecília began writing stories and tales when her children were born. As the number of her children grew, the number of tales increased as well. The children discovered that it was great fun to invent new stories and tales, thus her older kids write and illustrate tales. Cecília’s smaller children only test stories. Since their name is Watercastle in English, they publish their tales under the name Watercastle Tale Works. The parents live with their five kids in Hungary.

In the second part of the Kitchen Tales we can read about how the Bashful Frying Pan started to sing for the first time. Why did he break into a song all of a sudden? What did the Haughty Teapot say, and what about the garlic press and the cake-server? Were they also surprised? Read the tale!