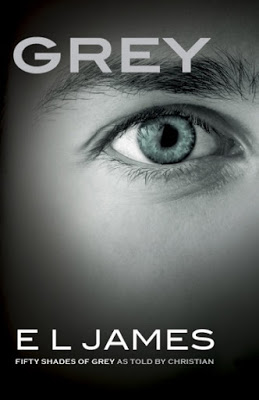 Christian Grey exercises control in all things; his world is neat, disciplined, and utterly empty—until the day that Anastasia Steele falls into his office, in a tangle of shapely limbs and tumbling brown hair. He tries to forget her, but instead is swept up in a storm of emotion he cannot comprehend and cannot resist. Unlike any woman he has known before, shy, unworldly Ana seems to see right through him—past the business prodigy and the penthouse lifestyle to Christian’s cold, wounded heart.

Will being with Ana dispel the horrors of his childhood that haunt Christian every night? Or will his dark sexual desires, his compulsion to control, and the self-loathing that fills his soul drive this girl away and destroy the fragile hope she offers him?

This book is intended for mature audiences. 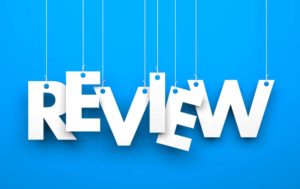 Seeing the events unfold through Christian’s eyes was enlightening. E L James showed us his softer side, his vulnerability. He seemed almost child-like at times; needing validation of his worth. In “Grey”, I found Christian more likable.
There were several passages revisited (which I knew was to be expected): the contact, bar and a few emails. I actually skipped over several pages because I knew what was going to be said/happen and saw them as pointless to peruse again.
I must say one thing, as I’ve said in the past regarding the movie to my friends/followers, this book backs up my claim THERE ARE discrepancies between the book and movie. That’s why I usually DON’T read a book and watch the cinematic version or vice versa. I will nitpick, as would any true fan.
Heart Rating System:
1 (lowest) and 5 (highest)
Score: ❤❤❤1/2
Paperback / Kindle /  [Unabridged] [Audible Audio Edition]

For the majority of us, DADS are truly our first superheroes. 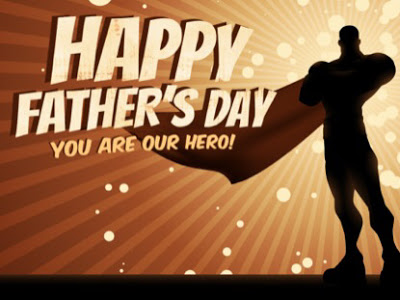 Down and Out by Kelley R. Martin (Book Review) 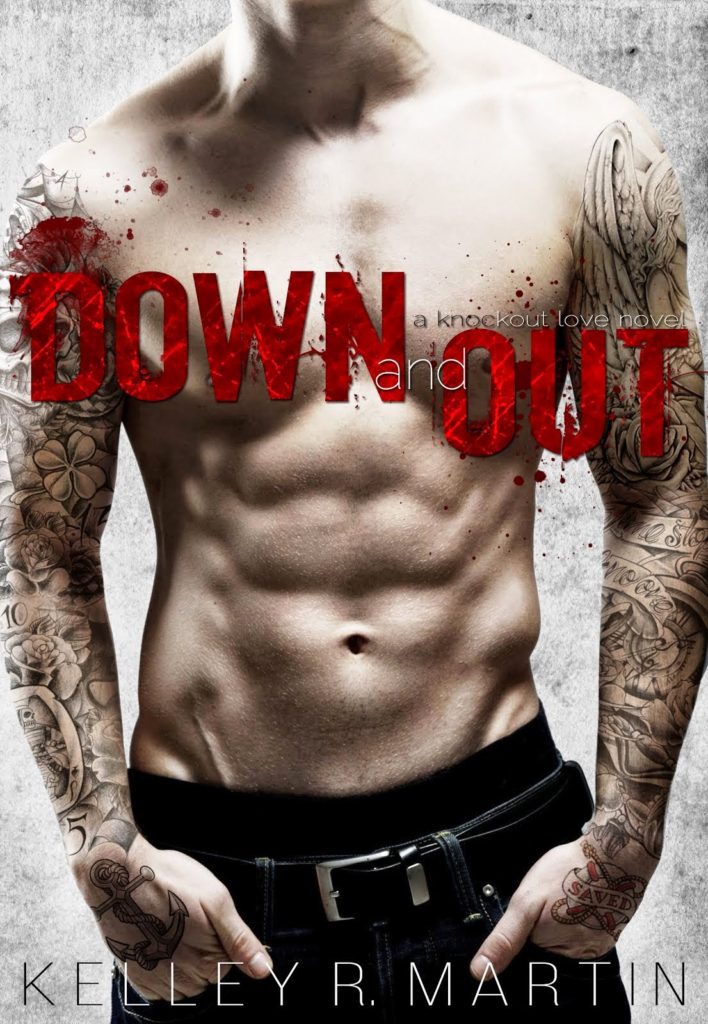 That’s how Savannah Ryan would describe her new boss, Declan Whitmore, the deliciously tatted and pierced fighter who holds the top spot in Boston’s newest underground fighting organization. She’d also describe him as bossy, arrogant, and–depending on what he does to piss her off that particular day–an asshole.

It’s that aloof attitude, along with Savannah’s witty comebacks and tight little body that land her on his radar. Unfortunately for her, Declan is relentless when he sets his sights on someone, both in and out of the ring. Unfortunately for him, this recently reformed bad girl is trying to go straight after heading down a dangerous path. She’s not going to make this easy for him. In fact, she’s going to make it–and him–very, very hard.

Declan’s not worried, though. He’ll have Savannah come hell or high water, because if there’s one word he’d use to describe her, it’s “MINE.” 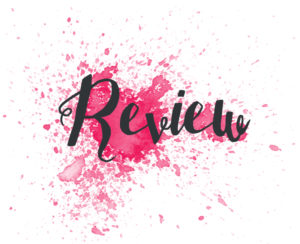 How freaking excited am I to have stumbled across this pulse pounding number while out shopping!!!
The sex scenes weren’t over the top (translation: not über kinky). However, it was the emotional ride that captured my attention and had me turning the pages until I reached the very end.
Declan was sweet, sexy, and touchy-feely (physically and mentally). However don’t let me put a mansy pansy image into your head. He was all MAN. He literally tossed her over his shoulder.
Mmmm, caveman…….
Oh yeah, that assertiveness definitely has its place.
Check this book out, folks.
Hell, check out all her books. I know I will be…….
Heart Rating System:
1 (lowest) and 5 (highest)
Score: ❤❤❤❤1/2
PURCHASE LINKS —–> Kindle / Paperback

Just Like That by E J Cohen (Book Review) 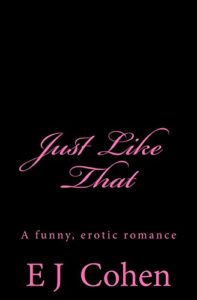 Alexandra Bond was content. Life was good – until it wasn’t. Her life derailed seven months ago when her husband, Walt, died of a heart attack at just forty-nine years old. Alex, forty-one, has dealt with the devastation, anger, and loneliness long enough. She’s ready to be bold and put it all out there. She’s eager to get her life back on track and the right man wouldn’t hurt. When a young hunk asks her out, she is optimistic. She soon discovers he’s quite accomplished and a well-known commodity, especially among the locals. He sweeps her off her feet and proceeds to introduce her to his sexual fantasies and games. He brings romance and laughter back into her life and turns out to be much more than she bargained for. With a quirky cast of characters including friends and family the hijinks that ensue will have you laughing and crying. 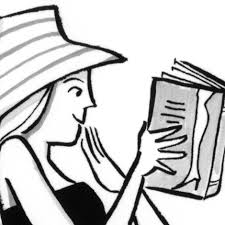 (review request submitted by the author’s PA for an honest critique)
I have a few issues with Cohen’s portrayal of Alex. First, who gives a time line to date/fuck after their spouse (of two decades) passes away. I’m sorry but I find that wrong. She “talked herself into a dating ban for of minimum of six months, partly out of respect for her husband and to the shock of his passing”, but after seven months, she begins to act like a bitch in heat.

Let me address her and Jesse……
She spots Jesse leaving her mom’s party and begs her mom to arrange for him to come back ASAP. Then after a promise of a phone call/date, she becomes frantic when she doesn’t hear from him after a couple days.
I get horniness but come on. Is she a real woman or an adolescent child?
Now heres comes the date……
Horniness again takes hold of her and she strips her underwear off in a restaurant bathroom, allows him to come home with him where he promptly secures her (ball gag included) and it’s her suggestion to forego a condom because she is on the pill.
Last time I checked birth control pills don’t hinder a person from catching an STD. Hell, she’s having unprotected sex with a stranger and doesn’t care because…… again, she’s in heat after not having sex since her husband passed.
Wow, just effin’ WOW!!!!!

Don’t even get me started on her talking about marriage after three weeks together. Seriously, what the bloody hell!

One last less-than-stellar comment in regards to he line thought by Alex — “Alex, you will soon marry the man of your dreams.”

If Jesse is the man of her dreams then what the hell was Walter (her recently deceased husband)?

Yeah, I will let you ponder that for a bit.

Jesse is a creative man. He sure knows how to spice it up. The Officer bit was kinky with a healthy dose of hilarity thrown in. French maid prank was cute.