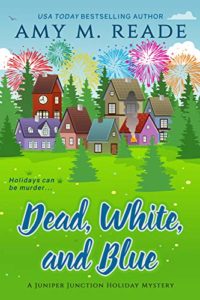 Summer is getting hotter in Juniper Junction, Colorado.

There’s a firebug on the loose, the townspeople are nervous, and Lilly Carlsen, single mom to two teenagers, has even more to worry about. She’s in charge of the Independence Day celebration, her mother’s mental health is declining, and her son is getting ready to leave for college.

But things are about to get even hotter: when a bistro owner dies at the celebration and Lilly’s best friend is charged with murder, events start hitting close to home. It’s up to Lilly to help clear her friend’s name while at the same time dealing her mom’s worsening forgetfulness as well as a coming-of-age issue under her own roof.

Dead, White, and Blue was jam-packed with relatable scenarios and characters. I’ve touched on a few of them below.

1.) Secretive children: The older your children become the less you are aware of what they are doing. They say they are going one place but actually end up in another. And underage drinking….. it happens everyday and children should be punished for it. I respect how Lilly handled the situation. You just can’t let things like that slide.

2.) Dementia: According to alz.org, it affects your memory, communication and language, ability to pay attention and focus, reasoning and judgment, and visual perception. Amy addressed all the symptoms. Plus, she gave realistic reactions and thoughts regarding Dementia. In fact, Tighe delivered the most powerful response when him and his mom, Lilly, were discussing Bev (Dementia sufferer). Below is a condensed version of that conversation.

Lilly regarding Bev, her mother: “She’s strong and healthy, with the exception of her mind.”

Tighe: “That’s the worst part, don’t you think? Her body will keep living while her mind dies.”

I can’t fathom anyone not be affected by his words…….

3.) Wrongfully accused of a crime: The news is littered with cases of people arrested for crimes they didn’t commit. The accused swears they are innocent. Friends and family stand firm the accused couldn’t have done it. But, the police arrest them anyways. Sometimes the accused is guilty BUT everyday we discover innocent people are behind bars and guilty of nothing. In Dead, White, and Blue, Noley is accused of using cyanide to murder Cerise and Lilly vows to clear Noley’s name. Again, I can’t personally relate to this predicament but I know others can. Cases like these are always in the news, and most times the innocent don’t walk away free.

Now onto my thoughts regarding the two investigations: the arsonist and the real murderer.

Murder mystery: I figured out who the murderer was but I was only partly right on the why.

Firebug mystery: The arsonist’s identity escaped me. I knew certain people were too obvious of a choice and was pleased to see I was right about their innocence. As for who actually started the fires and why, I will say the perp’s reasoning for setting the fires was totally plausible. Actually, I’m pretty sure if I do an Internet search I’d find a news report on such a similar situation.

If reading a good mystery wasn’t enough for you, Amy included THREE recipes in the back of the book. I can’t wait to try Noley’s Blueberry Studmuffins. Simple ingredients. Simple directions. Sounds perfect and I bet they will taste heavenly too!

She’s also a writer. She is the author of Trudy’s Diary, A Libraries of the World Mystery (Book One: Library of Congress), The Worst Noel (Book One in the Juniper Junction Holiday Mystery series), The Malice Series (The House on Candlewick Lane, Highland Peril, and Murder in Thistlecross), and three standalone books, Secrets of Hallstead House, The Ghosts of Peppernell Manor, and House of the Hanging Jade. She lives in southern New Jersey, but loves to travel. Her favorite places to visit are Scotland and Hawaii and when she can’t travel she loves to read books set in far-flung locations.

Her days are split between writing and marketing her books, but uppermost in her mind is the adage that the best way to market a book is to write another great book.