Son of the Moon: The Time for Alexander Series by Jennifer Macaire (Book Showcase) 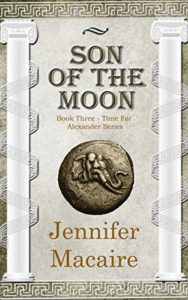 Alexander the Great journeys to India, where he and Ashley are welcomed with feasts and treachery.
With their son, Paul, being worshiped as the Son of the Moon, and Alexander’s looming death, Ashley considers the unthinkable: how to save them and whether she dares to cheat Fate? 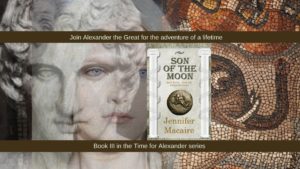 Alexander had slept all afternoon and looked better. A cold breeze chilled the air, so the tent flap stayed closed. The light was lit, the braziers glowing, and Axiom had prepared a thick lentil soup. We ate in silence. Paul fidgeted, looking all around the tent. He’s searching for Maia, I thought jealously. But no, a soft humming made him look around. It was my necklace. Ever since Paul had made it sing, I’d kept it in a small sandalwood box. Now, his very presence was making it hum.

Paul jumped up and ran to the box, crowing excitedly. He opened it and grabbed the necklace. There was a high pitched whine, a sort of joyous, mineral shriek, and the beautiful blue lamp that had followed Alexander all the way from Pella, exploded in a scintillating shower of blue sparks and flame.

I bounded across the rug, snatching Chiron out of his hammock and grabbed Paul by one arm. I pulled them both out of the tent, while Alexander, cursing heartily, rolled the rug up over the flames and smothered them.

It took ages to set the tent straight again. The lamp was gone and the rug was mortally wounded, sporting huge blackened holes. There were burned spots on Alexander’s precious table. My feet were cut and bleeding. Paul clutched the singing necklace and screamed if we tried to pry it out of his hands, and while he had it, its blue light cast a ghostly glow over him. Alexander’s men refused to approach.

Finally, I hobbled as far as the beach, and there I pried the necklace out of Paul’s fingers and flung it into the water. I could still see it though, glowing palely in the shallows.

Back at the tent Axiom, Brazza, and Alexander tried to clear up the mess, while Alexander continued to lament over his lamp and rug. Paul crawled onto my lap, but all he wanted was Maia or the necklace.

“I want to see the necklace. I want Maia,” he said stubbornly over and over again.

Finally, I got up and limped all the way to the little house at the end of the village. It was the only way we were going to get any sleep that night. Paul trotted happily beside me. He ran to Maia, throwing himself into her arms, not even glancing at me.

Maia was too kind to give me any sort of ‘I told you so’ look. I was too heartsick to care. I hopped back to the tent. Usse took care of my feet while I sat on the bed and cried.

Alexander surveyed the wreckage and sighed. “I did hear say the child was a harbinger of destruction.” He looked up at the tent ceiling where the empty chain swung back and forth. “I’ll miss that lamp,” he said thoughtfully.

I cried harder. “A lamp isn’t a child,” I sobbed. “Do you have any idea how much I’ll miss Paul when we leave?”

“I do, actually,” he said softly. He knelt by my side. “But he’ll be happy. Can you try, just try, to understand that he will be happy here?”

“I don’t know. I’ve searched for so long, I’ve missed him so much. Only six more weeks before we leave…” My voice broke.

“I’ll bring the children back, see if I don’t. Then Paul will have playmates.”

“He already does. There are three families who have decided to settle here.”

“I know. And many more will stay when we finally leave.”

I sniffled. “I threw the necklace in the lake.”

“I’m sorry about the rug and the lamp.”

“I’ll get new ones. I was getting tired of that lamp anyway, too blue. I think I’ll get a yellow one. I hear there are beautiful rugs in Indus. I can replace a rug and a lamp, but I could never replace you, or Paul. I’ve learned to live without my son. But I will never learn to live without you.” His eyes were sad.

“That’s the sweetest thing you’ve said to me in a long time,” I told him.

“I’m sick at heart about Paul. I have tried to tell you that, but I was too proud. I was sure that you would choose to stay here with him instead of coming with me. I want you to come with me. I need you.” He said it as simply as a child, looking at me, his arms loose at his sides.

I closed my eyes. I could feel the seconds slipping by like grains of sand; the minutes like pearls on a string, sliding through my fingers. Then the hours, the days, and the months would become years, and they would fly. Three years. So little time. I would stay with Alexander. I could always come back for Paul if I wanted to. If he wanted me. Alexander did want me. He needed me. And I was a fool.

I took him in my arms. “I’m coming with you. Never believe for one second that I would leave you.”

“I believe. Thank you.” He stroked my back, cupped my face in his hands, put his forehead against mine, and stared into my eyes. His eyes, so fey, the twin kingdoms of heaven and earth, were sad. He smiled though. “I will take you with me to Hercules’ rock. I want you to see me in action.”

“Lots of danger, cold, snow, catapults, yelling, screaming, and people dying. But it will be heroic. You’ll see. We’ll capture a fortress no one has ever captured before, and I’ll build a great statue to Nike, spirit of victory, companion of Zeus and Athena!”

“My, aren’t we optimistic,” I said, raising an eyebrow. “Just what is that stuff that Usse gives you?”

“Some sort of potion for my melancholy, why?”

“Well, I think you should give it to your whole army.”

I was just joking, but Alexander took me at my word. The results were incredible, to say the least.

DON’T MISS OUT ON THESE GREATS BOOKS! 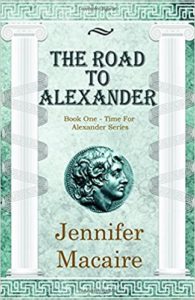 After winning a prestigious award, Ashley is chosen to travel through time and interview a historical figure. Choosing her childhood hero Alexander the Great, she is sent back in time for less than a day. He mistakes her for Persephone, goddess of the dead, and kidnaps her, stranding her in his own time. What follows, after she awakes under the pomegranate tree, is a hilarious, mind-bending tale of a modern woman immersed in the ancient throes of sex, love, quite a bit of vino, war, death and ever so much more. 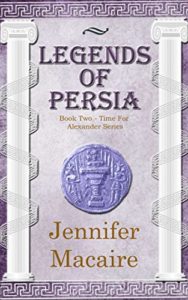 When Ashley Riveraine jumped at the chance to travel back in time to meet her hero Alexander the Great, she never thought she would end up staying there…

Following Alexander the Great’s army on its journey across Persia, Ashley is walking the knife edge of history. As a presumed goddess, Ashley is expected to bless crops, make sure battles are won and somehow keep herself out of the history books.

Can Ashley avoid the wrath of the Time Institute while keeping the man she loves alive?

Author Jennifer Macaire lives in France with her husband and three children. She lived in the Virgin Islands and used to work as a model. She met her husband at the polo club where he was playing. All that is true, but she mostly likes to make up stories.
She has published over twenty novels.

Her short stories have been published by Three Rivers Press, Nothing But Red, The Bear Deluxe, and The Vestal Review, among others. One of her short stories was nominated for the Push Cart Prize (Honey on Your Skin) and is now being made into a film. Her short story ‘There be Gheckos’ won the Harper Collins /3 AM flash fiction prize.

2 Responses to Son of the Moon: The Time for Alexander Series by Jennifer Macaire (Book Showcase)