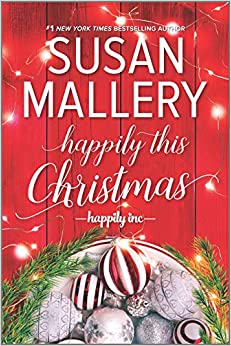 There’s no place like Happily Inc for the holidays…

Wynn Beauchene has a thriving business, a great kid and a mildly embarrassing crush on the guy next door—local cop Garrick McCabe. She’s a strong, independent woman who can’t help dreaming what-if about a man she barely knows. Until he needs her help…

Garrick’s pregnant daughter will be home for Christmas, and his house needs a woman’s touch. Garrick and his little girl were tight once and he’s hoping a small-town Christmas will bring her back to him. But thawing his daughter’s frosty attitude will take more than a few twinkle lights. Maybe sharing the holiday with Wynn and her son will remind her of the joy of family.

As the season works its magic on these wounded souls, Wynn realizes it’s time to stop punishing herself for a painful secret, while Garrick remains haunted by the ghosts of past mistakes. Will he allow Wynn to open the only gift she truly wants—his heart? 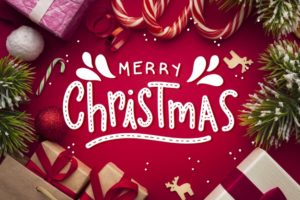 Annoying other people was one thing. Wynn Beauchene could completely get behind that idea, mostly because more often than not, people deserved to be annoyed. But annoying herself? What was up with that? Not only was it a total waste of time, it made no sense. The only solution was to stop acting like a sixteen-year-old girl with a crush on the quarterback. She was a mature adult, a single mother with a successful business and a life she really liked. If she was attracted to her handsome neighbor, then she needed to stop hanging out by the front window of her house, hoping to catch a glimpse of him. She should march over to his place, knock on his front door and say… And say…

“I’m an idiot,” she muttered out loud, not for the first time. No matter how she envisioned the “march over there” scenario, she couldn’t figure out what she was supposed to say when he opened the door.

Hi, Garrick. I was wondering if maybe we could, um, well, you know, go out sometime.

Really? That was how she was going to start the conversation? Shouldn’t she lead into it? Maybe mention she’d enjoyed having him as her neighbor for the past year and tell him how nice it was that he was a police officer and the whole street liked the fact that he parked his patrol car in the driveway. Not that crime was a problem in Happily Inc, because it wasn’t, but still, having a cop as a neighbor was great. Although her interest was more personal, what with how he’d looked over the summer, mowing his lawn…shirtless. Not that she hadn’t noticed him before—she had. Until the lawn mowing season, she’d managed to ignore him, but now she couldn’t and it was already November and she’d done absolutely nothing to take their nonrelationship past the waving and hi-ing stage, and here she was, hanging out by her front window and she was ready to slap herself upside the head.

It was the dating thing. She wasn’t good at it because she didn’t do it very often. There were a lot of reasons, very few of them interesting, but in the past five or six months, she’d been thinking that maybe it was time to let the no-dating rule go and have a personal life. But while she’d spent a lot of time thinking, she hadn’t done much on the doing front.

“I’m better than this,” she muttered, ignoring the little voice in her head whispering that she obviously wasn’t.

It was just that in every other area of her life, she was capable. Hunter, her fourteen-year-old, acting out in school? She could deal with that five ways to Sunday. A printing order gone awry at work? Easy-peasy. A friend with an emotional crisis? She was all about the hugging and straight talk. But when it came to dating, or wanting to date, or thinking Garrick was sexy and supersweet with her son and lately she’d been wanting them to get to know each other better, she was a mess. Worse than a mess—she was pathetic.

As proof, she was standing in her living room, looking out the picture window, staring at his house, waiting for him to get home. It was Saturday afternoon. She had a lot of things she should be doing, and none of them included staring at some guy’s empty driveway.

If only there weren’t something about him. But there was. Not just the whole tall with broad shoulders thing, although that was very nice, as were his gray eyes and dark hair, but that wasn’t really what got her attention. It was more the fact that while Garrick was always friendly and pleasant, there was a hint of something a little dark and dangerous lurking beneath the surface. Ridiculous, but true, and like most reasonably intelligent women who knew better, she couldn’t help responding to the possibility of a great guy who just might have a whisper of a dangerous streak.

She turned away from the window just in time to hear a dinging sound. After walking into the kitchen, she pulled two cookie sheets out of the oven. Because she’d made chocolate chip cookies, if you could believe it. Things were that bad.

Oh, not the baking—she baked all the time for Hunter, and most likely she would pretend she’d made these for her son, as well. Only she hadn’t. She’d baked them thinking she would take them over to Garrick, in a neighborly kind of gesture that—hopefully—would lead to some witty conversation, lots of laughter and him confessing that he’d spent the past few months wanting to ask her out.

It was a lot of pressure to put on chocolate chip cookies.

She slid in two more cookie sheets, reset the timer and had nearly moved all the baked cookies to a cooling rack when the doorbell rang.

Wynn walked through the living room and pulled open the front door only to find Garrick on her front porch.

He wasn’t in uniform—instead, he had on jeans and a T-shirt. As usual, his mouth was curved up in a smile that left her a little breathless.

“Hi, Wynn,” he said, his voice low and sexy—although that could have been wishful thinking on her part. “Do you have a second?”

She stepped back to let him in, wondering what on earth was happening. She’d just been thinking about him, and here he was. Weirder still, even though they’d been neighbors for a year, they’d never exchanged much more than a few passing comments, greeting each other and mentioning the weather. They’d certainly never been in each other’s houses.

“I’m baking cookies and I need to get them on a cooling rack,” she said, leading the way into the kitchen. “What’s up?”

“I need your advice.”

“Sure. I’m good at giving advice.” She glanced at him as he slid onto one of the stools at the island in the center of her kitchen. “People are less good about taking it.”

“Help yourself, but be careful. They’re hot.”

He took one and blew on it before taking a bite. His eyes half closed as he chewed.

Despite the relatively ordinary conversation, everything about the moment was surreal. Him sitting in her kitchen, them talking, all of it. Not that she minded his presence. Her kitchen didn’t host many men, not counting service guys doing things like fixing her dishwasher and unclogging her sink, and the change was nice. Plus she couldn’t help feeling she was being given the perfect opportunity to try one of the conversational threads she’d been practicing, where she mentioned them maybe, possibly, going out sometime.

“Joylyn’s going to be moving in with me,” he said, taking a second cookie. “It’s going to be a new experience for me.” He glanced at her. “We’ve never lived together before—not full time. There have been plenty of weekends and vacations, but this will be different. I want to make sure the house is comfortable for her.”

Joylyn? Who was Joylyn and why was she moving in?

Even as the questions formed, the obvious answer popped into her rattled brain. He had a girlfriend. Of course he did. She’d been telling herself that two years after her last relationship ended she was ready to find someone new, and Garrick was about to have Joylyn move in. How perfect.

“I think I have the right furniture,” he said. “It’s the other stuff I need help with. Making the house seem…” He paused, as if searching for the right word. “Cozy.”

Book 1: You Say It First
Book 2: Second Chance Girl
Book 3: Why Not Tonight
Book 4: Not Quite Over You
Book 5: Meant to Be Yours
Book 6: Happily This Christmas