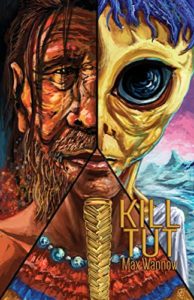 Ancient Egyptians, aliens, Neanderthals. Kill Tut is a historical fiction sci-fi novel. For a secret government operation in the near future, a team of three is sent back in time to kidnap King Tutankhamun.

New York, New York: 2041. The American-Egyptian War continues as more Egyptian battalions invade the USA. With the purpose of bringing the war to an end, Operation Golden Ankh is a top-secret Delta Force mission that consists of sending a team of three back in time. Captain Jackson Martindale, Staff Sergeant Laiklyn Ladore, and CIA Officer Dana Villa have seven days to complete the mission in the Eighteenth Dynasty of Ancient Egypt. To successfully complete the mission, the three must coerce King Tutankhamun to travel with them to the future. Forcibly kidnapping the pharaoh would lead to a domino-like disruption in the architecture of time. The three are quick to discover the past deviates from what history books provide. The ancient people of Thebes, Egypt resort to panic when their city is invaded by Neanderthal warriors; but when humanoid aliens with skin made of a malleable gold arrive, the Ancient Egyptians welcome them with open arms. 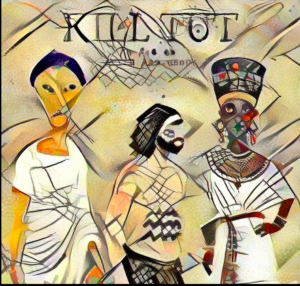 Dana asks Mayamenti, “The enemies you speak about in your worship, would that be the Neanderthals?”

“Those Neanderthals, where did they come from?” Dana asks.

Mayamenti’s interpretation conflicts with what Dana’s husband explained about Neanderthals. The way Dana understands it is, Neanderthals and humans have a common ancestor from which they evolved separately. What also confuses Dana, is she understands the Neanderthal species became extinct 36,000 years before 1323 BC. Yet, here they are.

Mope adds, “The Neanderthals lack heru.” The neuromorphic implants in neither Dana nor Jackson’s brain translated the last word into English.

Jackson asks, “What is heru?”

Mope says, “Heru is the power within ourselves that fights our animal selves. To be human, we must have heru. Without heru, we would have chaos like uncivilized animals. It is at our core beliefs as Egyptians to find order through chaos.”

“Do you have any water?” Jackson asks.

“Jackson,” Dana scolds, “that was rude.” She speaks to Mope, “In Hatti, we also have our own form of heru. It is important for us to be civil.”

Jackson returns with, “I just have a headache, and I need water.”

Mayamenti responds, “We have cold beer.” The room is silent for a moment. Then Jackson decides to awkwardly laugh. “You want beer?”

“Water is unclean,” Mayamenti tells him. “Beer will keep you healthy. Don’t be scared, there is no Turkish morphine in it.”

Jackson knows he needs hydration, “Sure, I’ll have a beer.”

“Come with me,” Mayamenti says. “You too, Dana. You deserve a tour.” Mayamenti takes Jackson and Dana out into the hallway. The walls are made from sun-dried brick. She shows them the bedchamber where their bed has a wood frame. The mattress is made of folded linen and the pillows are made of rock. Mayamenti shows them the bathroom, which has a mirror made of polished brass, a bathtub made of copper, and the toilet is a clay pot filled with sand with a limestone seat situated above. The baby’s nursery is located in the second bedchamber of the home. One of the walls is a painted image of the hippo goddess, Taweret, the protector of women in pregnancy. On the opposite wall is the dwarf god, Bes, the protector from evil. The baby sleeps in a bassinet made of sycamore wood. The kitchen is a shed in the backyard without a roof. In it is a clay oven where a servant bakes bread. 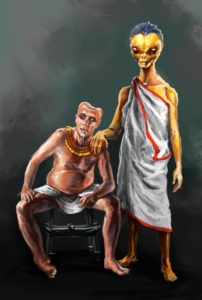 Max Wannow is an independent absurdist novelist, who describes his work to be thought-provoking and discomforting. Simply put, Max Wannow is not for everybody. Aside from being an independent author, he currently lives in Wisconsin and works as an environmental geologist.