Beyond the Veil by Jessica Majzner (Book Review) 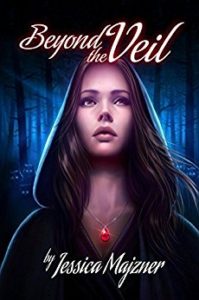 A fabled wall, marking the territory of the werewolves and adorned with the severed skull of a once great alpha, stands between Natalya and her prey.

When she finds the body of Anesa, her beloved mentor, she is determined to hunt down the vampire responsible. Crossing the border into Claw Haven to follow him is sacrilege though, and the undead werewolves whose skeletal bodies wane and wax with the moon are more terrifying than the vampire she seeks. But there she meets Voren, a werewolf who is a living contradiction to everything she has been led to believe.

Her journey into the lives of the pack entwines her and Voren’s fates with that of a master vampire’s: Arkadith. Defeating him may lift Voren’s curse and bring peace to Valwood and Claw Haven, but Arkadith is determined to bring an end to this vampire huntress as well…

(review request submitted by the author for an honest critique)
Throughout the years, I have watched many movies/shows that focused on vampires and werewolves. I’ve also read my share of books centering on them. With all of them, they share one common denominator…..not all “creatures” want the curse bestowed upon them.
Within every faction, wolf or vamp, there was some who fight the pull of the beast within and those who embraced the darkness. Beyond the Veil was no exception to the rule. It had werewolves, vamps, and humans who loved the thrill of the kill and ones who fought for peace instead of death and carnage.
I will say this, the battles between the humans and wolves were brutal – bloody – and everything you’d expect in a scifi (paranormal fantasy) book. The true form of the wolf alone will stand out in your mind as the one of the best shifting scenes in any written form. They are not the beautiful beasts depicted in famous tv shows. They are not even Hallmark card worthy. In my opinion, Jessica’s twist to a well-known shifter was a welcomed change to the norm. She brought fresh life into something gone stale. Good job!
As you can tell, I absolutely enjoyed the story except for two smalls thing……Anesa’s quick end and the final moments of Part II (no spoilers).
Anesa: As I watched her fight the vamps in chapter 1 and meet her end, I wondered why Jessica didn’t extend her role a few more chapters. I’d been happy for a flashback or two regarding her training Natalya. Based off Anesa’s combat skills, it would’ve been nice for Natalya to recall times with the fortune teller as they were laying her to rest or at other times Natayla remembered the wise, old woman.

However, despite my need for more Anesa and the predicable plot twist in Part II, Beyond the Veil didn’t disappoint and I’m sure it won’t for you either.

Jessica Majzner is a 25 year old author who has just released her debut novel, Beyond the Veil. It has always been her dream to share with you her story of a human village struggling to live peacefully alongside werewolves and vampires. Beyond the Veil has been very favorably received and reviewed on such websites as Booksie.com and Wattpad.com where it can be previewed for free.

Jessica lives with her fiancé and two dogs, an American Eskimo named Shyla and a very talented Italian Greyhound mix named Hazel that reviews things at her blog, www.beyondvalwood.com.

10 Responses to Beyond the Veil by Jessica Majzner (Book Review)