Have Amber — Will Travel by Keith Vlasak (Book Review) 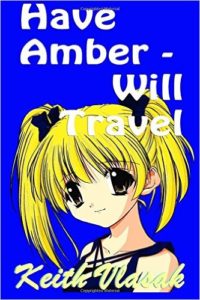 A modern American princess leads her brothers and sisters, a professor, a boy friend of her older sister and an army into an ancient underworld to free a millennium of lost souls and one lonely little girl.

No matter where you purchase your books, the first thing that captures your eye is the cover. You can tell a lot about it — genre, age range, main character(s), etc. Therefore, as an author, publisher, or cover artist, one goal should be to depict the book properly from first glance.

Sadly to say, the ball was throughly dropped on the construction of Have Amber — Will Travel’s cover. The adventure takes place in Egypt, dealing with gods, pharaohs, mummies, serpents, multiple-headed monsters and various other beings. However, none of those things were illustrated on the cover. No temples. No Egyptian images at all. What we have was an anime looking girl which could represent anything. In fact, I showed the book to my family and NOT ONE of them could tell me the genre or plot. That’s not good. NOT AT ALL.

Honestly, if I wasn’t requested to read this, I would’ve overlooked it. Thankfully, I was asked because within the pages were some outstanding depictions of mythical creatures, temples which would leave a visitor speechless, and battle scenes worthy of the price of a movie ticket (plus snacks).

The showdown with Seth and Apep (giant serpent) was electrifying and occurred in the best section of the book — In the Underworld. Whereas some other areas in the story droned on and never seemed to end, this area could’ve went on far longer (IMHO). This particular section also delivered quite a surprise regarding Peter. Just wait, I know you won’t see this bombshell coming. 🙂

However, through everything, something kept nagging at me. This story read as a sequel. There were multiple mentions of King Arthur, Merlin, and a quest regarding the Holy Grail. Plus, I didn’t grasp why they treated Amber with kid gloves. Why was she the princess on all their treks into the dreamworld? Why did they follow her every command?

So, I contacted Keith. I had to know if I missed out on a prior adventure because, again, it read as if I should already be familiar with these children and their roles in past quests. Here’s what he said, “Sorry. It is not a sequel (and I will definitely never write a prequel).”

In truth, this confusion was simply incomplete character and story development. A problem some authors are prone to have on occasion because they get a story in their head and forget the fine details when it travels from their creative noggin to a screen.

Now don’t get me wrong, all in all, this was a pretty nice read. Sure it had it’s up and downs, areas that definitely could have benefited from a little more spit and polish, but for the most part it was on point. Keith gave us an interesting storyline, weaved in just the right amount of Egyptian history, and repeatedly introduced new beings/obstacles so folks never knew what to expect next.

It’s definitely a book worth reading. 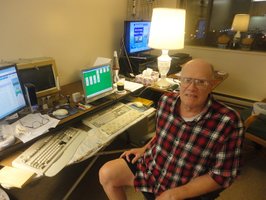 “[Keith Vlasak’s] prose flows as a river. The surface is smooth, placid; the current, strong. When you step in, immerse yourself, glide with the water, you can certainly feel the pull but you don’t know where it’s taking you. Then, suddenly, you round a bend, the river opens up, a new light bathes the water and the riverbank, and you realize you’re in a radically different place.” – George Konstantinow

I go back a long ways. I was born in 1950 and started sending out my stories in 1964. I started getting published in the literary small press in the 1970’s. In the 1980’s hundreds of my poems were published. In the 1990’s and early 2000’s I sold a bunch of genre stories: fantasy, science fiction, horror and suspense. In the last decade, I’ve been writing novel length projects. You’ll find them at Amazon and Amazon Kindle.

Over the years I’ve been a musician and song writer performing in failed garage bands and solo in coffee shops, I’ve worked in oils and water colors, pen and ink and even enjoyed taking art courses, an award winning photographer, computer programmer, and have actually earned my living as a farm laborer, tree trimmer, dish washer, house painter, store manager, retail supervisor, and a whole bunch of self-employed over the years. I’ve had a lot of fun and I think that shows in my writing.