Three Made in Heaven by Elena Kincaid (Book Review) 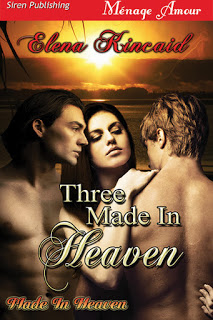 Maddie Sutton always felt something missing until the day she met Charlie and Cole. What started out as a childhood friendship slowly developed into an all-consuming love. Her biggest problem is that she can only see them in her dreams. Maddie realizes that to lead a normal life, she would have to let them go. After all, they’re only a fantasy…or are they?

Charlie Gilbert and Cole Mercer are both very real. For years they have loved and pined for Maddie, meeting up in dreams set in different locales. Afraid of making her choose between them, they keep their feelings hidden until finally realizing that the three of them belong together. How can they convince Maddie if she doubts their existence? When Charlie starts to doubt, Cole springs into action and brings them all together.

Now that they have found each other, they vow to never let go, but when an unknown danger looms over Maddie, Charlie and Cole will do anything to protect her, even if it means risking their own lives.

“Maddie,” Cole said as he cupped her face tenderly. “We have a lot to talk about, but right now I need to kiss you.”

Maddie didn’t protest as Cole pulled her flush against his body and bent down to kiss her, hotly, wetly. He fisted his hand in her hair and tilted her head back for better access. She moaned into his mouth, lost in the sensation of their kiss. She felt his erection press hard against her belly. Charlie came up behind her running his hands slowly down her back. He stopped when he reached the tie of her smock and began to undo it. She had forgotten to remove it at the studio.

Cole broke apart from their kiss and turned her around to face Charlie. Charlie removed the smock and threw it on the floor before pulling her to him. His mouth came down hard on hers. She opened for him when he licked her lips, loving the taste and feel of him. His hands roamed freely up and down the front of her body, while Cole’s hands were busy discovering her back. Charlie bent lower to kiss her neck while his hands massaged her breasts, his thumbs gliding over her oversensitive nipples. Maddie threw her head back against Cole’s shoulder and moaned loudly. Her legs began to feel like jelly. She felt as if they would give out if her two men weren’t supporting her.

Cole snaked his arms around her waist, lowering them slowly to the button of her jeans. He undid the button, pulled down the zipper, and slipped a hand inside her panties, firmly cupping her mound. Maddie began to move her pelvis against Cole’s hand in desperate need of some friction. He slipped a finger then another between her folds and into her burning hot channel.

“You’re so wet,” Cole said, his voice low and uneven.

She nearly convulsed when Cole removed his fingers from her pussy and sucked them into his mouth. “Mmm…you taste so good.”

“Bedroom,” Charlie growled. He hoisted Maddie up in his arms, her legs wrapped around his waist, and headed for her bedroom. He let her slide down his body right beside her high queen bed. She stood on shaky legs as Charlie and Cole continued to touch her, kiss her. Charlie grabbed the hem of her shirt and she lifted her arms up to help him remove it. Maddie fumbled with the buttons on Cole’s shirt as Charlie shucked his pull-over and T-shirt. Cole assisted Maddie with his buttons before reaching around to undo the clasp of her bra. She heard the sharp intake of breath from both men as they took in the sight of her ample round, bared breasts. Rosy nipples stood out begging for their attention.

“Fucking perfect,” Charlie rasped. He dipped his head to suck on one of her taut nipples. Cole followed suit with her other nipple. Maddie pressed their heads closer to her flesh, loving the feel of their hot, wet tongues on her. Charlie stepped back to remove his jeans while Cole lifted her up in his arms and climbed to the center of the bed, laying her down on her back. He pulled Maddie’s jeans and socks off, followed by her panties. Another intake of breath.

“You’re both wearing too many clothes,” Maddie panted. “I want to see you, too.”

“Yes, ma’am,” Charlie said with a smirk. Cole grinned widely and then both men began to divest themselves of the rest of their clothes.

Now it was Maddie’s turn to gape at their glorious naked bodies and holy hell, they’re freaking huge.

“See something you like?” Charlie asked. He gave Maddie a wink as her jaw dropped.

He and Cole both groaned as Maddie licked her lips. Then they were on her, kissing, licking, sucking, nipping at her flesh as if she was a feast and they were ravenous. Cole brought his lips back up to hers, kissing her deeply, while Charlie sucked on and played with her breasts. She slid a hand into Cole’s hair and scratched down Charlie’s back. She felt them both shiver underneath her touch. Charlie moved lower, kissing down her stomach to her hips to the inside of her thigh. He spread both her thighs wide and positioned himself between them, leaving her completely open to his gaze.

Cole pulled himself away from Maddie’s lips to sit by Charlie, admiring the sight of her spread open. She was wet and glistening, writhing underneath their gazes. They both murmured their appreciation at the site of her neatly shaven mound where a small triangular patch of dark hair sat, leaving everything else completely bare.

Maddie had always been shy around men. She expected to be embarrassed at being so completely vulnerable and exposed, but she wasn’t. Not with them. She wanted them to look at her. The way that they stared at her body with hunger and pure adoration made her feel beautiful and sexy. She felt herself getting wetter and ached for them to resume their touch.

It was like they were already attuned to her body. Sensing her desperation, Charlie dipped his head to suck on her clit, and she exploded after just two flicks of his tongue. She heard him chuckle.

“I want another one,” he said and continued to lap at her wet folds, licking and swallowing her cream. “Fuck, you’re delicious!”

I don’t believe in psychics and other worldly abilities but I have to admit the premise of this story was intriguing, nonetheless. Meeting your soul mate, or soul mates in this case, while you slumber was a total out of the box, clever idea.

Yes Elena, I applaud your creativity regarding the refreshing twist to the legend of the dream-walkers or as I am now labeling them “dreamboats” since “McDreamy” has been taken by a popular tv show/doctor.

While the three were connecting in the real world, they were also battling a “demon” terrorizing Maddie in her nightmares.
All I can say is thank goodness I don’t read too much into my dreams cause some of mine are freaky. On the other hand, I do have this one about the Winchester boys and Crowley so…. (laughing)
Just read the book, folks. 🙂
Heart Rating System – 1 (lowest) and 5 (highest)
Score: ❤❤❤❤

All Romance ebooks (ARe)