1. For those who might not be familiar with you, would you be a dear and tell the readers a little about yourself? How did you get your start in the writing business?
RS: The area where I grew up was mainly made up of slums and it would be reasonable to define it as having been a tough one. Because the teachers at my school told us we were only there to save us going into remand centres, it didn’t inspire enthusiasm to do well – or offer such opportunity. I left at fifteen years of age without any qualifications other than being able to handle myself in the schoolyard. I worked in a local shipyard in the North East of England until going into the Merchant Navy.  After my stint at sea, I took a job in a chalk quarry in Essex, and it was while working there I decided there had to be more to life. I decided to study and worked through to getting a BSc. degree in mathematics and computing; this got me a career in the IT department with Ford Motor Company where I worked until I was released from harness. With my background it might seem odd, but my imagination had been my biggest friend in life and I’d always been a keen reader. It wasn’t until I took an early retirement at fifty years of age that I began writing fiction – and I immediately took the work seriously. That was when I found out what I was about.
2. Do you ever suffer from writer’s block? If so, please share how you handle it.
RS: I don’t get writer’s block in the regular sense; there is always so much going on in my head I don’t suppose I’ll last long enough to get it all out. But I do occasionally get rewrite block. Sometimes I’ll be in the middle of a  redraft and while I know what I want to add or change, I struggle with the words, they never sound quite right. Fortunately, it doesn’t happen often and when it does, I jot down rough notes in capital letters at the impasse point and go on with the rest of the draft. When I come back to it I usually wonder why I had a problem in the first place.
3. Contrary to what some people envision about a thriller writer’s life, it’s not all glitz and glam. Well not for the majority of us. With that bubble sadly busted, when you’re not writing, how do you spend your time?
RS: When I’m not writing I spend a lot of time researching the world of marketing, it’s a real mountain to climb. When I free myself from that, I read or watch some drama or other on the TV. I love walking and our commitment to Wilson, my dog, wears about six miles from the soles of my shoes on a daily basis. A workout in my small gym takes a half hour each morning and in the summer the garden steals more of my time. The good thing about these pastimes is I can think about my schedule; reshaping a story I’m working on or what I should be doing next in a marketing campaign or, is there anything else I should be doing to get my work under the nose of a prospective reader. Also, getting away from the PC allows me to get things into perspective. This said, I do enjoy freedom when on holiday. It is my time for closing down. Multitudes of holidaymakers lie around reading while soaking up the sun, me, I do nothing, and I do it big time. To contradict those words, I often come up with new story lines and see the opportunity for character development. I jot down notes of these revelations, so I suppose I never escape completely.
4. I know many writers, such as myself, keep their pastime/career a secret. Do those close to you know you write? If so, what are their thoughts?
RS: Writing is my main interest in life, in fact it totally envelops it, so it seems natural that I want to talk about it. Having said that, there are people; friends, relations or even neighbors I know, where writing holds no significance to them. I have learned not to discuss the topic with them, as their lack of enthusiasm dampens mine. There are a lot of readers out there and I find it uplifting when total strangers can become quite eager to respond when they find out about my writing. Not because they think I’m anything special, they just get excited to talk to someone at the front end of one of their hobbies.
5. Will you share with us your all-time favorite authors? If you’re like me, it’s a long list so give us your top ten.
RS: Harold Robins, David Morrell, John Connolly, Terry Pratchett, Henning Mankell, Jo Nesbo, Vince Flynn, Hakan Nesser, Steig Larsson, Jussi Adler-Olsen. The list is as it came to me, but there are as many indie and trade authors I’ve enjoyed equally; I  just happen to have read many of the books from the above authors, so
they were quick to come to mind.
6. If you could choose one book to go to the big screen, yours or otherwise, which book would you choose and whom would you love to see cast in the parts?

RS: I feel bound to say, it would have to be one of mine. And as Birth of an Assassin is first in the series, this would be my choice. George Clooney would make a great General Petrichova. Sean Faris looks the part of the main protagonist, Jez Kornfeld, and a blond Michelle Dockery as Anna would be the perfect love interest for him. Otto Mitrokhin, the antagonist, would have to be a Dolph Lundgren look-alike, but I’m not sure if such an actor in the right age bracket is currently out there.

7. Would you care to tell us what you’re working on now? That is if it’s not top-secret information. If so, just whisper it in my ear. I swear it’ll go no further.
RS: The third novel in the Birth of an Assassin series is in for its final proofread. But I’ve also been working on a modern day thriller set in Recife, Brazil. The scene for this one is an imaginary favela occupying a range of non-existent hills.
8. Where can we find your stories, and is there a particular reading order?
RS: The most convenient place to get an overview of my work would be on my website,  http://rik-stone.com/index.html. The site has several excerpts from each book and if you like what you see, you
can use the links there to get through to an Amazon site. The order of the series is; Birth of an Assassin, The Turkish Connection, and The Man in the Blue Fez. Although the same characters turn up in each of the books, the stories are primarily stand-alone.
9. Would you please share how your present and future fans can contact you?
RS: I am on Twitter using the handle @stone_rik or I can be contacted on my website either via the contact form or the comment box on my Newsroom page.
10. Before we conclude this enlightening interview, do you have anything else you’d like to share? The stage is all yours.
RS: Thank you, yes. To be a writer you should love writing. To clarify; when first starting out it isn’t, shouldn’t be, about money or success. My guess is there are less writers out there who have made it to overnight glory than there are people who have won first prize on the lottery – and that makes for pretty long odds. I believe the realistic route to success is to just keep plugging away until one of your efforts hits the bright lights. If, when, that happens, and providing your first works are quality, then your successful book will drag the others into the limelight with it. It is at that point you can concentrate on money and success. Loving what you do makes the journey that much easier.
Rik, those are great words of inspiration. Thank you for them and for gracing us with an interview today. Folks, I hope you enjoyed learning more about Rik Stone. If you have any questions or comments for him, please leave him (us) a note below. But before you do, let’s take a in-depth look at “Birth of an Assassin. 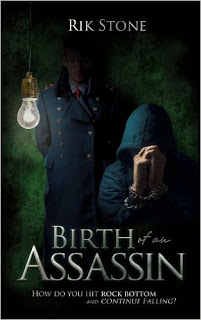 Set against the backdrop of Soviet, post-war Russia, Birth of an Assassin follows the transformation of Jez Kornfeld from wide-eyed recruit to avenging outlaw. Amidst a murky underworld of flesh-trafficking, prostitution and institutionalized corruption, the elite Jewish soldier is thrown into a world where nothing is what it seems, nobody can be trusted, and everything can be violently torn from him.

(review request submitted by the author for an honest critique)
When I began reading this suspenseful story and was introduced to the characters, I found similarities to a few famous action stars. Jez reminded me of Steve Rogers. Both him and Steve were small in stature but had hearts twice their size. Also both wanted to join the military and had difficulty in achieving their wish until someone saw “something” in them.
As for Anna, she reminded me of Agent Carter and Viktor resembled Bucky.
I wonder if Rik is a fan of those Marvel characters and if his love of them crossed over into their character development.
Much like the Captain, drama, secrets, mystery, and danger surround him and life rarely has any quiet moments.
All this means, you’ll find more action here than in a Jason Bourne movie.
Heart Rating System – 1 (lowest) and 5
(highest)
Score: ❤❤❤
BUY NOW AT AMAZON —–> Kindle – Paperback – Audible – Unabridged