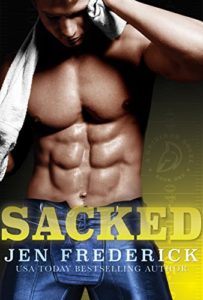 What he wants he gets…

Knox Masters is a quarterback’s worst nightmare. Warrior. Champion. And…virgin. Knox knows what he wants–and he gets it. All American Football player? Check. NFL pros scouting him? Check. Now, he’s set his sight on two things. The national title. And Ellie Campbell. Sure, she’s the sister of his fellow teammate, but that’s not going to stop him. Especially not when he’s convinced Ellie is the one.

…but he’s never met her before.

But Ellie isn’t as sure. She’s trying to start a new life and she’s not interested in a relationship…with anyone. Beside it’s not just her cardinal rule of never dating her brother’s teammates that keeps her away, but Ellie has a dark secret that would jeopardize everything Knox is pursuing.

—–> REVIEW <—–
From the cover, to the characters, to the love scenes, this book is hot….hot…HOT!!
Jen delivered a combination of sexiness, sweetness, and humor that had me turning the pages at record speeds.
If you like football or romantic tales, then you’ll absolutely fall head over heels in love with Sacked.
Trust me, this is a book you won’t want to put down!!
Heart Rating System – 1 (lowest) and 5 (highest)
Score: ❤❤❤❤❤