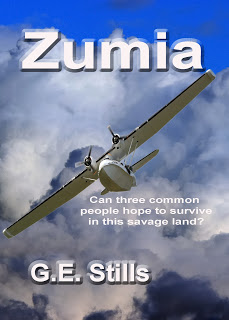 Grady and his partner Tuyen, contract to fly a passenger, Carson, from Houston to an island off the western coast of South America. The trip is routine until they fly into a sudden storm that nearly causes them to crash. The storm passes quickly but they can’t locate the island. Frustrated, Grady flies to the mainland. He is unable to find any familiar landmarks and the seaplane is running low on fuel so they land on a river. The next day they set out on foot to search for help. When they rescue a native woman, she tells them they are in a land called Zumia and she has never heard of a place called South America or Earth. Xaria joins them and their adventure begins.
Excerpt
It took longer than Grady calculated but at last, the continent loomed ahead. As they drew near the coast, he expected to see signs of civilization but saw none. Even when they passed over the landmass, there were still no signs. They flew over an inlet that appeared slightly familiar but still looked wrong. Gazing down a frown came to his face.

“Something doesn’t make sense here. Right over there should be Machala , Ecuador a sizable city.” Tilting the wings slightly, he pointed to the location, “but as you can see for yourself, there’s no sign of it. In fact, there isn’t any sign of people at all. I’ve flown over Machala several times in the past and this bay looks like the right one, but it’s somehow different. I’m going to fly up north and try landing near Guayaquil an even larger city. Besides I need to get this plane on dry land and assess any damage.”

“Grady, I haven’t been able to get anyone on the radio either. There’s nothing. I’ve searched many bands and there is just nothing. No chatter at all.”

When he was unable to spot any airports, he finally landed the plane in the large river that emptied into the bay. Extending the wheels, he drove up on shore. After shutting the engines down, he got out to begin his inspection. Both Tuyen and Carson went with him. Lush dark-green jungle foliage ended a few yards from the sandy shore.

“Grady, while you check the plane I’m going to look around a little,” Mr. Naplier said.

“No, I’m just going to walk along the beach. And please, call me Carson.”

He didn’t find any major damage and looked up at Carson ’s shout. When they joined him, Carson pointed to the tracks on the beach. They came from the jungle, to the water, and then led back into the jungle. The tracks were the right size and shape to be made by a person.

“Well I guess there are people around here. Maybe we can follow these tracks and find a village. Then maybe they can tell us where we are. If we’re really lucky, they may have a radio,” Grady said.

“Grady, I’ll remind you that I’m hardly dressed to go hiking through the jungle. Besides it’s going to get dark soon.” Tuyen nodded toward the setting sun.

“I think we should sleep in the plane and get an early start in the morning. Does everybody agree?” He looked at Tuyen and Carson who both nodded in agreement.

They stood facing the jungle and listened to the sounds of the birds chirping. Grady wondered how far they would have to walk before they found the village. The chirping stopped and the jungle grew quiet. Almost eerily quiet. The three of them nearly jumped out of their skins when an ear-splitting roar broke the silence. Dashing back to the plane they scrambled onboard. Tuyen looked at first Grady and then Carson in fear.

“What the fuck was that?” she asked.

Carson shrugged. “I have no idea. I’ve never heard a sound like that before.”

“I don’t know either, but I don’t want to be on this damn beach when we find out.”

Hurriedly, Grady went through the startup process and soon the engines roared to life. Turning the plane, he headed out into the water. When he was several hundred yards from shore, he slowed the engines and let the plane drift. Looking around, he spotted what he was searching for. The island was large enough to have some good-sized trees but small enough, he hoped, to be uninhabited by any large creatures. He had Tuyen idle up the engines to hold the plane in place. He stripped to his boxers and waded to shore with a rope that was attached to the nose of the plane.

After tying the rope off to one of the trees, he returned. Slowly, Tuyen idled down the engines and finally shut them down when they determined the rope would hold the plane in place. With the engines silenced, it was very quiet on the water. So quiet that they could easily hear the jungle noises in the distance. In addition to the normal chirping of birds and other sounds, they could not identify, several more loud roars, split the air.

Grady climbed back onboard, nodded to Carson along the way and squished to the cockpit in his wet clothes. “The current isn’t strong but to be on the safe side, I’m going to tie off another rope,” he announced. “In the meantime, how about getting out some blankets and pillows for us?”

Tuyen made an awful face. “You’re asking me to go back in that cabin alone with Mr. hands? You know how much I dislike him.”

“You could always go wading in your mini and tie off the plane partner. This is South America though, and there are many fine aquatic creatures that may be in the water Do I need to remind you you’re wearing a mini that is open at the bottom.”

“Ick that is a disgusting thought. Point taken though.” Tuyen tightened her lips. “Just be certain you hurry back if you want to find our passenger in one piece.”

To his relief when he returned from tying off the second rope, both Tuyen and Carson were in one piece. Blankets and pillows were stacked on one pair of seats. After raiding the snack supply for a meager supper, they sat talking and listening to the jungle sounds.

Now that you’ve had a sneak peek at G. E. Stills new book, Zumia, WHO IS READY TO WIN? 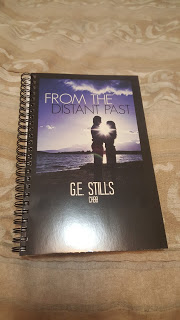 To enter, all you have to do is leave a comment or question on this feature.

You’ll have until THURSDAY (midnight, central time) to enter. FRIDAY morning, I will post the winner’s name and attempt to message you. Please follow the comment thread or come back on Friday to see if you are the lucky recipient of this amazing prize.