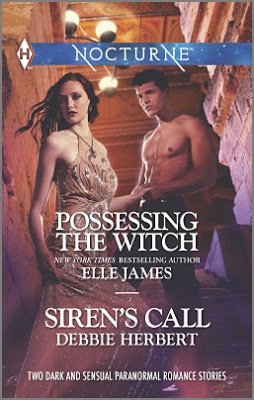 Possessing the Witch by Elle James
Selene Chattox doesn’t know what—or who—she’ll find when she follows her premonition to the river’s edge. When she discovers Gryph Leone, the spirit witch brings the injured stranger home, determined to resist the desire he stirs. But as he heals, she knows fate has brought them together. And as their passion ignites, so does the danger…

Siren’s Callby Debbie Herbert
Lily Borsage is the ultimate siren: gorgeous, aloof, and irresistible to all men in Bayou La Siryna. That is, until Nashoba Bowman returns to town. The Native American kid whose innocent first kiss Lily remembers fondly is all grown up, hot as an Alabama summer—and immune to Lily’s charms. What self-respecting mermaid could resist finding out more?

Witches, shifters, and psychopaths should’ve held my interest but unfortunately I found the stories lacking in intrigue. The whack-jobs’ identities were no mystery at all and their climatic demises were far from climatic. Here I thought a battle between a wolf and lion (Possessing the Witch) would be epic. It was epic…..an epic fail.
Same disappointing battle between Nash/Lily/and their nemesis.
Heart Rating System:
1 (lowest) and 5 (highest)
Score: ❤❤