Seventeen-year-old Brenden McAllister can’t wait to prove himself to his overprotective parents—and enjoy the beach! Despite problems related to his ADHD, he’s finally on his own, allowed to borrow his mom’s truck and travel to his best friend’s house in California. It’s great. In fact, it’s perfect until he makes a pit stop in a tiny desert town called Live Oak Springs Township.

Something’s off in L.O.S.T., like that witchy girl in the general store, and a greasy guy that gives him an ominous warning. Weird, for sure. Maybe even a little frightening. Bren plans to take care of business and get back on the road.

Except, somebody stole his mom’s truck. And that witchy girl, she’s starting to change into something with glowing eyes and sparkling fingernails. And what’s with the bats and finger joints for sale in that creepy store? Before Bren can even yell, “Foul ball!” he’s trapped in a world of mysterious magic and terrible danger—maybe forever—unless he can find the power in his blood, become a champion of prophecy, and defeat the most evil being who ever lived.

Jasmina Corey knows Bren may be the solution to her biggest problem. He has a warrior’s heart and the strongest spark of magic she’s ever found. As Queen of the Witches, it’s up to her to save her people from the vicious, murdering Shadowmaster, and Bren might be strong enough to fight beside her. Too bad he can’t pay attention. Too bad he’s so impulsive. And he knows nothing about magic, he hates her guts, and he doesn’t want anything to do with his destiny.

He’ll get over being kidnapped. Sure he will! She can teach him what he needs to know. Sure she can!

Bren strains her optimism to the breaking point, but Jasmina’s out of choices and out of time. She has to find a way to reach Bren, and to work with him to take out the Shadowmaster for good. The fate of the witching world—of the whole world—rests squarely on her nervous shoulders. 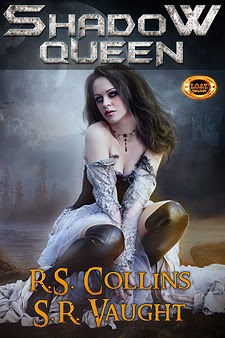 The day Jazz Corey died, Bren McAllister lost a piece of himself. He knows he’ll never be whole again, and this King of the Witches gig—not his style. But he’s trying. He knows that’s the only way to honor the girl he loved, the girl he still loves, the girl he’ll always love. With the help of his father and brother, not to mention Jazz’s grumpy advisors, he’s rebuilding Live Oak Springs Township, and restoring the Path to its full glory. He’s able to keep his mind on his new royal job until the moment he realizes Jazz might be alive . . . sort of. She might be waiting for him to come get her. And if he doesn’t hurry, it might be too late.

It’s simple. All he has to do is turn his back on everyone who believes in him, find a passage no one has ever seen, unlock it with a key no one understands, defeat an evil monster no one can name, cross through some gate that doesn’t exist, and die without dying.

Jasmina Corey knows death shouldn’t be like this. It’s dark and cold, and everything hurts, and Shadows keep chasing her. Shadows and big stinky things with wings. Worse than that, a know-it-all peacock is stalking her, and the stupid bird won’t shut up. Where is she, really? How is she supposed to get out?

Jazz knows she’s losing herself, and she has to get out of . . . wherever she is. And get back to . . . who was that handsome boy with brown eyes? Was she a witch before, or is that just another dream, like the fanged monster breathing down her neck while the peacock screams?

She’s smart. She can figure this out. She knows that just as sure as she knows that she’s the daughter of . . .

Jazz has to hold on to her fading mind and find Bren, because something’s coming for her. It’s huge, and it’s evil, and it wants what’s left of her soul.

Nothing to fear but fear itself? Right. Whoever said that never tried to walk out of death—or run.

Except for Bren’s terrifying vision of the Shadowmaster escaping her prison, Jazz’s nightmares and growing jealousy, mysterious girls with special abilities showing up at random, and old witch factions going to war with peaceful refugees…

Safety turns to desperate danger when a shapeshifting dwarf kidnaps Bren’s brother, the sanctuaries erupt in riots and bloodshed, and Bren and Jazz face a crisis of trust that threatens to tear apart their relationship—and the witching world. It’s obvious something dreadful has descended upon L.O.S.T., but what? Bren and Jazz must find a way to stand together, or watch everything they have built tear itself apart.

Amazon Kindle Purchase Link
Amazon Paperback Purchase Link
~Overall Review and Star Rating~
❤❤❤1/2
When I purchased this series, I had no clue it was generated towards the young adult crowd. It was suggested to me from a fellow author through a newsletter and since the book summaries sounded intriguing, I decided to give it a shot.
All in all, I liked the series and I think it will be a hit with the younger folks. Heck, I could see 30+ readers enjoying it as well. It has witches, hags, elves, harpies, and many more mystical/magical beings.
Parents, as far as intimate moments, only kissing occurs in the story. Again I want to stress, the lead roles are played by teenagers.
Box Set Purchase Link