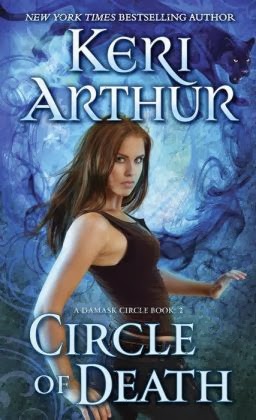 In one, vicious night, Kirby Brown’s world is torn apart. Her best friend is dead, killed by the madman who is now after her. And she has no idea why.

Doyle Fitzgerald has been sent to Melbourne, Australia, to hunt down a killer. What he doesn’t expect to find is a circle of witches capable of controlling the elements-and a sorceress determined to take that power for herself. And he certainly isn’t expecting to play bodyguard to a woman who is more than she seems.

When the police prove incapable of protecting her from the monsters that chase her, Kirby has no choice but to place her safety in Doyle’s hand. And while she finds herself inexplicably drawn to him, she fears to trust-because of the magic that lies in his soul.

It quickly becomes evident that the reason behind the killings lies in her past. But it is a past she has no wish to remember.

Because Doyle isn’t the only one with magic in his soul. Only hers was capable of destroying a world.

Witches, vamp, shifter…. Oh yeah, three of my favorite things. 🙂
I’m actually loved the zombies in the story. Yeah, “Walking Dead” has made me a fan of the undead.
The only difference between the tv show biters and Keri’s….. Keri’s zombies fight back.
If this zombie apocalypse ever happens, I vote for the “Walking Dead” type to roam the world. No way do I want to meet up with a dead guy who throws a punch first…. bites later. That’s craziness. 😀
Be sure and check out “Circle of Desire”….. the final novel in the Damask Circle series!
I’ll be ordering mine very soon!
Heart rating system:
1 (lowest) and 5 (highest)
Score: ❤❤❤❤❤
Amazon Paperback Link
Amazon Kindle Link