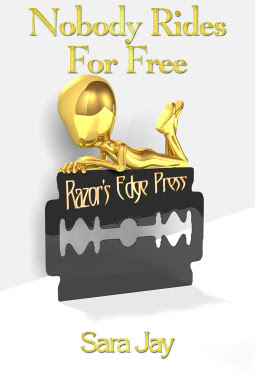 Genres: Razor’s Edge Press, Dark Fantasy, Hot Flashes
Themes: Menage, Elves, Dragons & Magical Creatures
Blurb
Fae law prevents Sinn from mating, but the bikers have rules of their own — nobody rides for free.
In a world where Fae desires overrule those of mere humans, Sinn is consumed with desire for her soulmate, Daka. However, Daka refuses to break the Fae law that prevents them from having sex without the queen’s permission. Sinn finds a way to sate her sexual hunger in the company of three bikers.

They’ll make a good tribute to the queen’s appetites, too…

EXCERPT
“Come on,” said the blond cowboy, smiling at her charmingly. “You can’t stay out here alone. It’s dangerous! Coyotes and bears and stuff.”
She didn’t tell the idiot that such animals would never come within a mile of her out of fear. They faced the direction she was going — and besides, she could make them go any way she wanted if they chose to divert from her path. She simply simpered, “Well, all right, gentlemen.”
She walked over to them, wondering which one she should straddle first.
Where had that come from?
Green Eyes spoke up for the first time, and his voice — though still notably human — slid over her like a dark whisper across stone. “Nobody rides for free.”
“What was that?” Sinn asked, perplexed. Surely they didn’t expect tribute from her as the queen did? Humans didn’t even know of such things.
“You heard him, darlin’,” said Cowboy, his accent more annoying now. “Ass, gas, or grass — nobody rides for free.”
“I see,” she replied. She should just go ahead and kill them. But then she’d have to drag all three bikes herself, which, though not impossible, wouldn’t be easy with the queen’s insistence of non-flight transportation. “Of course. I can buy your gas at the next station.”
Green Eyes snorted, as if he felt her no longer worth transporting. The other two seemed like they were still game.
“Okay, little lady, hop on,” said Cowboy, and he presented her with a clunky old helmet.
She almost laughed at the thought of falling off the motorcycle and hurting herself. She’d flutter to the ground and watch them die without much interest, then lug them all to the shrine with her.
Instead, she maintained her human cover, adjusting the helmet over her long black curls, and got behind Cowboy.
As soon as he revved his engine up, she felt desire stirring again. Her breasts, pressed against the back of his leather jacket — something that might normally make her gag — began to tingle, and she could feel the rough texture against her nipples through her silken shift.
What trickery was this? No human had ever made her feel so — so lustful! Only Daka could do that.
Daka… Just thinking about him made her even more aroused. The vibration of the bike between her legs made her imagine being beneath him. His slick green skin would bob over hers, his spiraled tattoos rendering her dizzy as he dipped himself into her body over and over again…
Oh, Daka! She could feel her release building and Cowboy must have sensed it because he laughed a little and grabbed her knee. “We’ll get some ass out of you yet, princess,” he drawled.
Though she knew he assumed she couldn’t hear him over the roar of the engine, her Faery ears made out his words perfectly. Indeed, Cowboy? We shall see about that.
But as they traveled into the night, she began to think about his words. They wanted ass from her, did they? She, too, wanted some relief, after all. They were not of the Fae. They wouldn’t break her contract.
What of Daka, though? What would he think? He considered humans nothing more than toys as well, and her playing with them would likely not upset him. Especially if she managed to help him play with a human or two of his own later.
She felt a real smile return to her face. She was going to play with some humans tonight.
~~~~~~~~~~~~~ 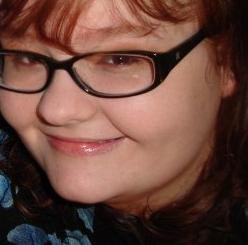 Sara Jay won the Spring Fling Contest at Changeling Press this past spring. Woo-hoo! Be sure to send your congrats her way! Here is an excerpt from her winning story, Nobody Rides for Free.

Visit the Author: Sara Jay
Supernatural Romance Not for the Faint of Heart
Nobody Rides for Free, a feral faery-and-biker foursome
Get your copy here