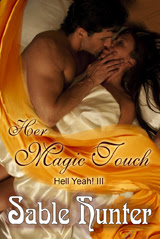 An Erotic Romance – Daredevil Joseph McCoy is convinced of two things: first, he’s invincible – and second – he’s God’s gift to women. But heaven has other ideas. Joseph’s world is turned upside down when he wrecks his dirtbike and finds himself paralyzed from the waist down. For a while, Joseph doesn’t know if he wants to live – until Cady comes to take care of him. Cady is Joseph’s guardian angel – literally. And she will do anything to make sure he regains all he has lost – including his manhood. Cady is not Joseph’s usual type of woman – but by the time this handsome cowboy knows what hit him – Cady has found a place in his heart. After Joseph has experienced Her Magic Touch – he will never be the same. Joseph falls in love with Cady and learns that true beauty is a rare and wonderful thing.

Review
As a woman who’s battled the “ugly duck syndrome”, I could relate to Cady – feel her pain. For quite a bit of this installment in the Hell Yeah series, I didn’t like Joseph’s character. I found him to be a douche. He constantly made Cady feel less than beautiful and no matter if a person is homely or not, they don’t need to constantly hear how they are ‘lacking” in the looks department. However, I know it was his “manly pride” causing him to behave like an ass so I kept that thought in mind as I continued on.
Eventually, he realized he was being a jackass and saw her true beauty even though his actions and word choices didn’t always show his true feelings. It just proves how strong Cady was in this story or maybe it was because of their past connection which made her not lose faith in him. Yes, she was his guardian angel reborn to complete a mission. (Not a spoiler. It’s on the book’s description.)
By the end, I did come to LIKE Joseph and became a FAN of the duo!


Oh and I loved the sneak peek into their future – sweet and sad, just like the chapters before it.
Heart rating system – 1 (lowest) and 5 (highest)
Score: ❤❤❤❤
Amazon Paperback Link
Amazon Kindle Link 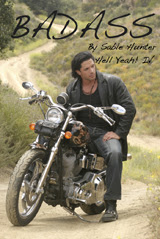 Amazon [Kindle Edition]
Amazon [Paperback]
Isaac McCoy is every woman’s dream. He’s a cowboy, one of the Texas McCoy’s of Tebow Ranch – tall, dark, handsome and sexy as hell. To add to the mystery, he’s a biker – clad in black leather, riding a big Harley – he makes the girls swoon. To put it simply, Isaac is the black sheep of the family. And what his family doesn’t know is that he’s also a Dom. Always a little different from his brothers –Isaac has been into fast cars, fast women – and the kinkier side of sex. Until Avery. That’s right’s the Texas Badass has fallen for the angel of Kerrville County – the Baptist Preacher’s daughter – Miss Prim and Proper. And that will never do. As much as he wants her, Isaac pushes her away – sometimes you have to be cruel to be kind.
Avery has been in love with Isaac for years and she’s ready to make her move. But Isaac makes it clear that they come from different worlds, there’s no way she can fit in to his life. She’s not the kind of woman he needs. So, Avery decides to take matters into her own hands. What she intends to do is take lessons in how to be a bad girl. Avery is determined to learn what it takes to please Isaac in every way. She’s seriously after her Badass – and soon, he’s not going to know what hit him.
Review


It was freaking eerie how much Avery and I had in common.
* Preacher’s daughter
* Romance writer
* Motorcycle rider (Me – former)
* Engaged in hands-on sexual research
* Fell in love with a biker
* Rarely uses profanities
* Realized she liked “kink”
* and the list goes on……..
Wow, that list just made me want to read about Isaac and Avery again!
Heart rating system – 1 (lowest) and 5 (highest)
Score: ❤❤❤❤
Amazon [Kindle Edition]
Amazon [Paperback]