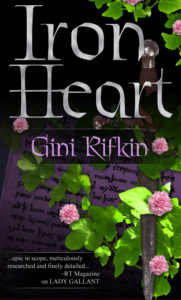 Who wrote Beowulf? Perhaps we’ll never know. Or did it happen this way….?

England: circa. 879 A.D. In the time of King Alfred the Great

With the heart of a warrior and the soul of a poet, Faran Kilbraun travels far from home in search of the sword and shield of his ancestors. Protecting the ancient relics was his responsibility. Now, to regain his honor, he must recover the stolen artifacts and battle a life-long enemy.

Following the accidental death of her cruel husband, Leanora Wrenn is wrongly accused of his murder. Forced into exile, a small north shore island becomes her place of refuge, exoneration her only hope.

When Faran discovers Leanora’s remote sanctuary, both their lives are changed forever. Destined to become comrades-in-arms, they fight side by side. Ending up in one another’s arms, will they find redemption and love?

Leanora tapped her foot with impatience. Would the sun never set?

Thank goodness, the autumnal equinox would soon be upon them. After Mabon, the hours of brightness, stretching into forever, would wane even more to her advantage. Until then, wait she must, for it was no longer safe to venture out

along the shoreline in the light of day.

Of late, there had been an increase in the number of ships passing by. And although no one had yet to come ashore on her tiny isle, they might if they saw her. Like silent demons, the wretched ships appeared without warning. Their wickedly graceful, serpentine prows gliding out of the sea mist—mighty beasts, unstoppable and terrifying in their splendor.

At the very sight of them her heart raced with fear, and it did not calm again until the ships were reduced to harmless blurs upon the horizon. Yes, it was safer to wait until nightfall.

As darkness subdued even the memory of the sun, she grabbed up a large basket and drew aside the ragged piece of cloth hanging across the cottage door. She liked to think of her habitat as a cottage, although in truth she knew it only merited to be

called a hut. Woven of sticks and branches, it listed in the direction of the prevailing winds.

She had lived in a real house once. A home of timbered halls carved from towering oaks. Woven tapestries warmed the walls, but those who dwelled within had been wrapped in cold cruelty.

Thank the Lord those days were over. She was safe now. Was it worth the price of living like a peasant, with threadbare clothes and no well-tended hearth? She had to believe it was so.

Turning her back on her thoughts and the hut, she stepped through the doorway. The sand, still warm from the day’s heat, comforted her bare feet, and threading her way between the huge boulders, she glanced at the troubled night sky. The stars refused to shine, and high-riding clouds obliterated the full moon. There would be no helpful illumination to guide her to the nets along the shore.

No matter, she knew the way by heart, and the use of a torch might attract more than moths in her direction.

At the breakers, she paused and listened to the ocean’s never ending song. Tonight the tune seemed filled with lament. There was no gurgle of happiness

where the waves lapped at the rocks, and no sigh of contentment as the receding waters rushed back to the sea.

Perhaps the elements regretted their earlier behavior of today when the wind had terrified the air and the waves had battered the island. For a moment she had feared for her life, but the storm had soon passed. Like people, the wind and the

water were fickle and not to be trusted. Yet on occasion, the sea could be benevolent, and she gave thanks for the fish and crab it provided. Together

with foraged berries and the eggs from the chickens, her meals were healthy and varied. Not grand fare, but good enough for now.

Angling to the left, she abandoned the shelter of the rocks and headed across the slope of open beach. A sharp wind teased her ankles, buffeting her from

behind. It felt as if another storm approached. Or did the cold herald more than a change in weather?

In answer to her unspoken question, she tripped over something where nothing should be. Her skirt tangled about her legs, and she pitched headfirst over the unexpected obstacle. The basket flew from her grasp as she landed with a thud in the sand. A cross between a growl and a groan came from the mound that had caused her fall.

On hands and knees she scurried to one side. Then leaning forward, she peered through the darkness trying to determine what lay before her. Was it a scaly monstrous thing from the sea? Or worse yet, a human? Instinctively she unsheathed the long-bladed dagger hanging at her waist.

The thing groaned again, and uttered several words in a language unknown to her. Holy Savior, it was a man. She prayed he had not been sent to find her. Her mouth went dry, her throat constricted. She tightened her grip on the hilt

of the knife. “I will kill you before I let you take me back,” she threatened, not caring if he understood her Saxon words.

He made no response in sound or movement.

What should she do? Drive the knife swiftly into his heart, instinct urged.

Weapon at the ready, she awkwardly crawled forward on both knees and one

free hand. She was glad for the darkness hiding his features. A faceless enemy was so much easier to hate and deliver unto God.

Drawing closer, she realized the man lay upon his stomach. In ire, she jammed the knife into its rawhide case. Reaching across his broad shoulders, she gripped the remnant of his tunic, and using her body as a counterweight, leaned backward. The stranger rolled toward her. She scrambled out of the way as he settled onto his back. A rush of air escaped his mouth.

“Thank you,” he whispered, through lips that sounded stiff and parched. This time the words he uttered were in Saxon English. He may be the master of two languages, but he was a fool to thank her for helping him.

She knelt once more at his side, and again took up the blade. Like a pagan priestess about to perform a sacrifice, she raised the knife high overhead and tensed for the downward thrust. Then the horrible truth of what she was about to do hit her full force and her resolve faltered.

The moon broke through the clouds casting an ethereal brightness upon the man’s face and chest. He gazed up at her with an expression as startled and questioning as a child’s.

She swallowed hard, shocked by the manner of brutality that had come so easily to her. The pain and suffering she had seen and endured did not give her free reign to become as merciless and savage as her tormentors. Still, she must protect herself.

Leanora glared down at the man. His straight nose and the planes of his cheeks were highlighted by moon-glow, and the same celestial light turned his shoulder-length hair into a mantle of silver. Her gaze drifted lower.

He labored for each breath, and through the rips in his tunic a wet glittering iridescence reflected off his powerful chest and well-muscled abdomen. The

Captivated by these thoughts, she remained unmoving. The rough pebbles dug into her knees, and her arms ached from holding the knife on high. A decision must be made. But she was more familiar with taking orders than making far-reaching

“Half the treasure will be yours,” the man croaked, “if you let me live.”

Treasure? There were not enough riches in the world to prompt her to risk her freedom.

She brought the knife down with all her might, burying it to the hilt in the sand beside the stranger’s right ear. “You owe me your life, warrior.”

She spat out the words like bitter fruit tart upon her tongue. The man’s eyelids drooped, and his head lolled to one side.

Desperately she prayed her compassion would not also prove to be her undoing.

Gini Rifkin’s books follow characters who are courageous and passionate about life, and when they meet, sparks fly while danger often threatens. Her settings include the American West, Medieval and Victorian England, and contemporary fantasy. When not writing, Gini has the privilege of caring for her rescue animals including ducks, geese, goats, rabbits, donkeys, and cats. Her writing keeps her hungry to learn new things, and she considers family and friends her most treasured of gifts. So step back in time or into the future, where adventurous romance is waiting just for you.
Blog
Goodreads
Pinterest
Facebook