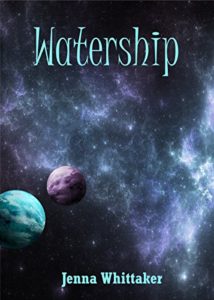 The world was dying, so scientists worked to create a safe haven in the centre of the earth; hollowing it out for the future generations to live safely.

When the creatures created to watch over the people detected the failsafe program had activated, and that their hollow world was about to collapse, they took them to a sentient, biological spaceship, set with the coordinates to take them to a new world.

But with the aliens who helped the scientists in the past having come back to change the course of the ship, things soon spiral out of control.

Creatures with multiple legs, claws, horns and milky eyes. Individuals with an unnaturally elongated form, no facial fissures except a mouth and orb-like eyes. Abominations with no facial features at all. Jenna truly did the sci-fi genre justice with her creations. Beings I would expect to see on the Syfy channel line-up.

One Syfy original show came to mind while I was engrossed in “Watership” — Falling Skies (TV Series 2011–2015). The”Skitters”, six-legged aliens on Falling Skies, did communicate using the hive-mind connection. Also, like Falling Skies, there was one special girl whose appearance changed drastically by aging more rapidly than humanly possible, and proved to be the game changer to the plot. Like the show, aliens and humans worked together but, unlike the show, most of the storyline took place on a ship.

Like Jenna’s other science fiction story The Last Immortal, I felt somethings needed more clarification. How is Charn, Queen’s daughter, able to produce a black mist from her fingers and eyes? Also, Aspects (beings created by the core) came about out of the blue. One final thing, I’m surprised Desu wasn’t more aware of certain happenings aboard the ship since she brought the humans there. You’d think she’d know the ship inhabitants forwards, backwards and sideways. Due to these problem areas (my hiccups), I had to dock a couple stars. However, all in all, a great read and worth spending few bucks on.