Murder and Other Unnatural Disasters by Lida Sideris (Book Review) 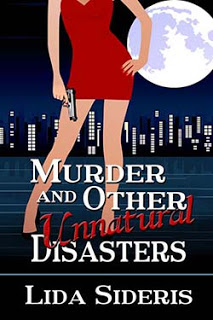 Watch out Southern California! There’s a new entertainment attorney in town and she’s got game. Only problem is, it’s not the one she should be playing. Corrie Locke belongs behind a desk, not behind a Glock. She should be taking VIP calls, not nosing around a questionable suicide. Instead, she’s hot on the trail of a murderer.

Luckily, she’s the daughter of a late, great private eye and she’s inherited his love of sleuthing…and illegal weaponry. It doesn’t help matters that her gene for caution is a recessive one. Corrie finds herself in the center of a murder case, unearthing suspects in shocking places. With a cold-blooded killer on the loose, Corrie will have to up her game, or die trying.

I veered out of the parking lot and bounced onto the cavity-ridden dirt road. The mystery car appeared out of nowhere from beneath the tall pines, eclipsed by the darkness. Now it raced away somewhere ahead.
“Why didn’t we hear it start?” I asked James.
“It’s a hybrid.”
“We’re in a car chase with a Prius?” A car chase with a Porsche or Ferrari was respectable, but with a battery operated car? All bragging rights vanished.
I shifted into warp speed and surged downhill. Seconds later, we faced the hybrid’s rear bumper. The spot for the license plate sat empty.
“He’s not getting away,” I said.
The hybrid turned and launched up a hill, kicking up pebbles and a dusty haze. It fish-tailed and I nearly nipped it in the rear. I executed a sharp left and ran over something large. And lumpy.
“Stop,” James said.
I skidded to a halt, a cloud of dirt trapped in my headlights. The Prius escaped through an open gate and onto La Paz. My eyes cut to the rearview mirror. My tail-lights illuminated the road behind us in an eerie red glow. As I surveyed the scene, not a trace of saliva remained in my mouth.

(review request submitted by the author for an honest critique)
Have you ever read/watched a crime show and figured out the “who” and “why” of the plot halfway through? Heck, even ten minutes into the mystery and you’re suddenly bored out of your mind because there’s no real mystery at all? Well, have no fear, Murder and Other Unnatural Disasters will keep you on your toes until the bitter end.
Besides the murder/suicide case, Corrie and Michael are on a mission to retrieve a missing cat and solve the mystery of the alien abduction. Well, there weren’t really any green men but Fo didn’t know that (at first).
Doesn’t this book sound delightfully crazy? Oh it is thanks to the numerous whackadoodles gracing the pages.
However, as much fun as I had reading this whirlwind of nuttiness, a couple things made this story’s score a 3.5
1.) There were a multitude of cast members introduced to us at once. In fact, I kept a list of who everyone was and a brief description of each until I really got to know them.
2.) At certain points of the book, I wondered if there was a mini story (a .5 novella) written before this one. I actually checked because when Clayton appeared, when she thought of her father’s death (before the big unveil of what happened to him), I felt as if I missed something. So, I checked and I noticed there wasn’t anything before Murder and Other Unnatural Disasters.
3.) Corrie was noticeable jealous of the attention women gave Michael but seemed to want James as well. She also “spoke” too much about the attractiveness of her male co-workers.
So my question is…. Does she really have feelings for Michael? Want James? Both? Or is she just noticing and wondering what it would be like with any attractive male?
My gut is telling me a love triangle is in the works and I can’t wait to read it. Plus, I can’t wait to watch her sleuthing ways in action again. I have no doubt book 2 will be just as entertaining.
Heart Rating System:
1 (lowest) and 5
(highest)
Score: ❤❤❤ 1/2
Amazon – Print Edition / Kindle /
NOOK / THE WILD ROSE PRESS 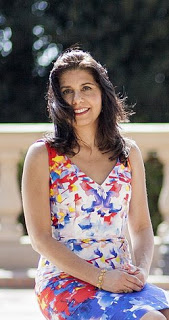 Like her heroine, Lida Sideris worked as an entertainment attorney for a film studio. Unlike her heroine, she was not blackmailed into investigating the suspicious death of a co-worker. Lida resides in the northern tip of Southern California with her family, their rescue shepherds, and a flock of uppity chickens. She was the recipient of the Helen McCloy/Mystery Writers of America scholarship for her first novel, Murder and Other Unnatural Disasters. To learn more, please visit www.LidaSideris.com.
Twitter Link
Website Link
Blog Link
Facebook Link
Goodreads