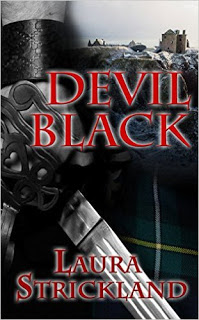 Disgraced in her father’s eyes, Isobel Maitland travels to Scotland, determined to purchase her sister’s happiness at the cost of her own. But when her coach is held up and she is abducted by a dangerous highwayman, she faces an unexpected choice: suffer the loveless union to which she has resigned herself, or marry this ruthless, Scottish outlaw who can ignite her desire with a single touch.

They call him “Diabhal Dubh”—Devil Black—and he spends his days terrorizing the countryside, trying to outdistance the memories that torture him. The King has decreed he must settle and take a wife. And when he steals the alluring woman betrothed to his enemy, Dougal MacRae sees a way to both answer the King’s demand and obtain the revenge he has sought so long…

This is a new release of a previously published edition.

(review request submitted by the author for an honest critique)
When I finished reading this historical tale, I sat down to write a list of pros and cons to help me gauge my score. I’d like to share that list with you.
Pros
1.) I liked the fact Laura wrote about several strong heroines. Women can be fighters, in body and mind, and it was thrilling to see their strength and determination shine through. Bravo!!
2.) The fight scene was bloody…. good.
3.) I liked how Black wasn’t judge, juror and executioner after he won the battle.
Cons
1.) Laura described Dougal, Devil Black, as a very passionate and virile man. You’d think then she would’ve demonstrated his prowess in a bit more detail. We saw the start of this seduction (a kiss) and then nothing. They had sex multiple times but zip, zilch, nada on elaboration. I’m not asking or expecting NC17 material but a higher rating than PG would’ve been nice — especially with his “reputation”.
2.) I didn’t quite understand why Isobel decided to marry Dougal. All I can say is he must be one helluva kisser.
HEA
Heart Rating System – 1 (lowest) and 5
(highest)
Score: ❤❤❤ 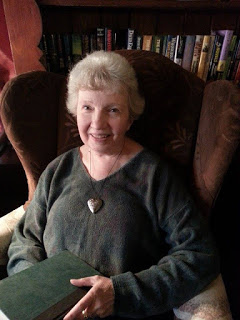 Born and raised in Western New York, Laura Strickland has pursued lifelong interests in lore, legend, magic and music, all reflected in her writing. Though her imagination frequently takes her to far off places, she is usually happiest at home not far from Lake Ontario with her husband and her “fur” child, a rescue dog. Author of Scottish romances Devil Black and His Wicked Highland Ways as well as The Guardians of Sherwood Trilogy consisting of Daughter of Sherwood, Champion of Sherwood and Lord of Sherwood, she has also published two Steampunk romances, Dead Handsome: a Buffalo Steampunk Adventure and Off Kilter: a Buffalo Steampunk Adventure and two Christmas novellas: The Tenth Suitor and Mrs. Claus and the Viking Ship. Her Lobster Cove Historical Romance, The White Gull, is followed by a Lobster Cove novella, Forged By Love.
www.laurastricklandbooks.com