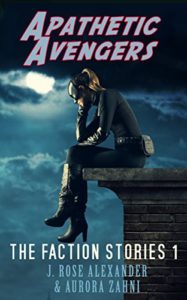 The only thing Rachel Hingis hated more than swimming was having to play well with others. Edgar Fern, nerd extraordinaire, couldn’t find anyone to play with. Life would have been just fine if they never crossed paths.

The victims of an accidental experiment deep in the corn fields of Iowa, they and four others -Alex, Celeste, Laura and Susan – were changed, and not necessarily for the better. As a mysterious group (insert sinister title here) starts to pick off Red Bug’s students, they have a choice to make: become victims, or become heroes.

The bumpy road to being a masked avenger is fraught with conflict, mystery, explosions– and Freezees.

(request submitted by Aurora Zahni (author) for an honest critique)

When Aurora asked me to read Apathetic Avengers, I counted the days until the superhero book was in my greedy, little hands. Aurora knows I love comic/superheroes so he was confident I would enjoy this book… which I did.
How could you not like these group of super teens. When their tale started in detention class and their personalities began to unfold, I immediately thought of The Breakfast Club; a movie all should watch and often. It’s a true classic!!
As for the powers these teens possessed, we witnessed super-strength, telekinesis, magic wielder and my favorite —- the ability to transmute anything at the basic chemical level. Celeste (Chemical Avenger) turned gas into water and converted a bullet into garlic. Pretty wicked cool, right!!
With all the special skills at the FBI’s disposal, their services were called upon often. They don’t save everyone but, like any true hero, they kept trying.
However, thru all the high-packed action scenes, one question kept nagging at me — a loose end. How did these kids come upon their super abilities? Maybe this question will be answered in the sequel, but as a reader, I was hoping for some nuggets of information.
On a final note, I’m not sure who quoted Speed but I loved it. Best action movie ever!!
Heart Rating System – 1 (lowest) and 5  (highest)
Score: ❤❤❤❤
Kindle Purchase Link