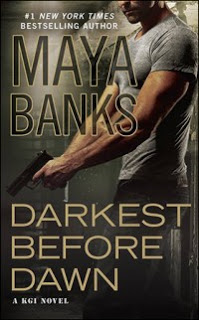 The enigmatic Hancock has been both opponent and ally to the KGI teams for as long as they’ve known him. Always working a deep game, Hancock’s true allegiance has never been apparent, but one thing is for certain—he never lets anything get in the way of duty.

But now, his absolute belief in the primacy of his ultimate goal is challenged by a captive he’s been ordered to guard, no matter how much she suffers in her prison. She’s the only woman who’s ever managed to penetrate the rigid walls surrounding his icy heart, but will he allow his perplexing feelings for the beautiful victim to destroy a mission he’s spent years working to complete or will he be forced to sacrifice her for “the greater good.”

REVIEW
We’ve all seen Guy Hancock be Mr Billy Badass more times than we can count. We’ve also seen his softer side. However, we’ve never seen his heart truly laid out before us than when he met and fell for Honor. I always thought Maya would have to create one helluva woman to capture Hancock’s heart and she didn’t fail me in this tall feat. Honor had more strength, integrity, courage, and yes, honor than probably most men and women I’ve read about through my many years as a bookworm.
I can see why so many people were in awe of her. She made quite an impression on everyone she encountered and those she didn’t encounter as well. A character that will always be remembered.
This is a story that shall be remembered.
Darkest Before Dawn had action, true love scenes, and numerous passages which will break your heart right along the characters they center around.
Folks, be prepared to lose yourself in the story of an unforgettable heroine who managed to love a man who couldn’t love himself while fighting the villains who threaten to tear their world apart.
Heart Rating System – 1 (lowest) and 5 (highest)
Score: ❤❤❤❤❤

5 Responses to Darkest Before Dawn by Maya Banks (Book Review)