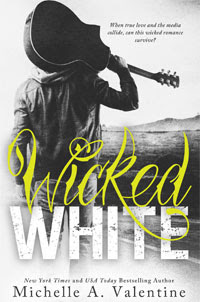 After his mother dies, rock star Ace White—lead singer of the red-hot band Wicked White—is done with the celebrity game. The phony people, the meaningless one-night stands: he doesn’t want any of it anymore. Quitting in the middle of a sold-out tour, Ace sets out to find some place—any place—where he can be alone.

Aspiring singer Iris Easton’s life has never been easy. First, her mother walked out on her when she was a kid. Now she’s buried in debt, weeks after losing her beloved grandmother. When a mysterious and sexy new guy moves in next door, Iris can’t help but be drawn to his soulful gaze. She can tell there’s something from his past haunting him—something he’s not telling her.

Just as Ace starts falling for Iris, the media go on a worldwide hunt to find the missing rocker. Will true love conquer all, or will the truth be the very thing that tears the couple apart?

REVIEW
I realize some women are into poets and poetry, but for me, quoting Shakespeare during sex is not sexy or romantic at all. I was actually rolling my eyes as I was reading it. Now before anyone assumes I am not a fan of Shakespeare and that’s why I found the scene unappealing, let me set you straight. I actually rather enjoy Shakespeare. I was one of those students who didn’t moan and groan when we read works by him.
However, for me, their first sex scene fell flat. I know Shakespeare played a vital roll into their reunion but…eh.
In Chapter 17, I found myself turned off by their lovemaking there too. During the section where they are discussing going bareback, she admitted to him she had one previous lover. Him: he talked around it, explained his reasoning for his number, but never actually stated how many. In the end, they went latex-free.

I don’t know about you but I would’ve dragged him to the nearest clinic first.

All in all, I wasn’t a fan of either character. I didn’t feel any chemistry between the two of them.

The only reason why I gave this a 2 instead of a 1 is because of Birdie and Adele. I liked those two supporting actresses.

3 Responses to Wicked White by Michelle A. Valentine (Book Review)