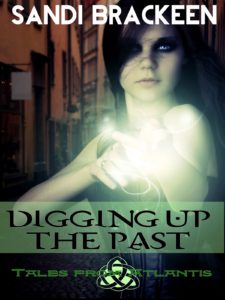 The Spade of Apocatequil can raise the dead and grant immortality—and it’s been stolen!

When supernatural agents Riley Perez and Jason, her partner at the clandestine government agency DUE, are given the task of tracking down the magical artifact, they discover that the culprit may be one of the workers at an archaeological dig at Shady Shores. Is it John Braden, the head archaeologist on-site, who was involved in the original discovery of the spade? Or is it Danny Roget, the anthropologist, who claims that there have been strange sightings? Riley and Jason’s hunt for the spade is endangered by a rash of sudden, unexplainable deaths of people involved in the dig. Together with Cameron Delaney, the intriguing alpha werewolf who runs Cerberus Security, the company in charge of protecting the archaeologists at the dig, Riley and Jason must find the spade before it can be used to destroy the world!

Immortality? Now that’s tempting. Throw in an army of the dead, and hey, any evil overlord would kill for that package.

When the Homeland Security Service’s Department of Unusual Events, or DUE, assigned my partner, Jason, and me to this case, the file said the spade we’re looking for was valued at eighteen million dollars and belonged to the Peruvian Government. Stolen during shipment from Peru to the local University, the spade was scheduled for study, along with a number of the other artifacts uncovered on a dig site in Peru. According to our file, the HSS believed it had been stolen for financial gain or, perhaps, to cause an international incident. Not our usual type of case, but not unheard of either.
What the file didn’t mention was that this wasn’t just any gold spade. This was the Spade of Apocatequil. Peruvian legend has it that anywhere Apocatequil stuck this spade in the ground people sprang up. Now, the spade is believed to grant the holder immortality…
PURCHASE LINKS – Kindle – Paperback

(review request submitted by the author for an honest critique)
We’ve all encountered books that we didn’t 100% love or hate. For me, this is one of them.
Since this story included a demon, were, shifter/empath, I expected more action. More suspense.
Just more.
Let me describe my feelings as such…..
Think of the build-up, the excitement you feel when a rollercoaster climbs higher and higher. You can’t wait for the sudden drop. You’ve been waiting for it. The rush it brings you.
Now imagine you get to the peak and instead of the powerful descent, the coaster creeps down the slope. There’s no screaming; arms raised into the air. No, there’s just a slow, easy decline back to ground zero.
There were parts of “Digging of the Past” I found quite enjoyable. Jason, for one, was a very likable demon. I enjoyed how he made assignments fun. Plus, he adored pizza and so do I. Nuff said.
One scene in particular was very humorous. The altercation between Cam and the guard. I guess when dealing with a were, “Sit Fido,” just won’t do.
Heart Rating System – 1 (lowest) and 5 (highest)
Score: ❤❤1/2

I live in Texas with a roommate, two Yellow Labs, a Shepherd/Border Collie mix, and two terrier mixes. The animals were all rescues, and I’m a strong supporter of rescue and the fostering program.

I have always been an avid reader of mysteries, fantasies, and romances, and I like being able to combine the three into one story. My full time job is as the Public Information Officer for the local Sheriff’s Office, and I teach English part time at the local Community College.
I have a couple of degrees lying around somewhere, and I’ve been writing ever since I can remember. I took time off for work and school, and previously my writing has been more geared toward short stories and academic papers. I have now switched to writing fiction and currently have several more books in the works.