After a car accident killed her parents when she was a child, Bronagh Murphy chose to box herself off from people in an effort to keep herself from future hurt. If she doesn’t befriend people, talk to them or acknowledge them in any way they leave her alone just like she wants.

When Dominic Slater enters her life, ignoring him is all she has to do to get his attention. Dominic is used to attention, and when he and his brothers move to Dublin, Ireland for family business, he gets nothing but attention. Attention from everyone except the beautiful brunette with a sharp tongue.

Bronagh Murphy has been through a lot over the past few years, a hell of a lot, so when her 21st birthday rolls around all she wants to do is relax and spend the day with her family. Quietly. Her boyfriend, Dominic Slater, doesn’t do relaxed or quiet. He never has, and he never will. He plans out a day for Bronagh that is both romantic, and exciting. However, Dominic’s version of exciting is very different to Bronagh’s as she will soon find out. When things take a turn for the worst, and a bad altercation leaves Dominic once again fighting for his girl, Bronagh will have to decide once and for all if she will fight in Dominic’s corner or walk away and never look back. Bronagh loves Dominic, and what Bronagh loves, Bronagh protects.

Keela Daley is the black sheep of her family. She has always come second to her younger cousin Micah. Even in the eyes of her mother, Micah shone bright, and Keela faded to black. Now, in adulthood, Micah is a bride-to-be and the spotlight is solely on her. Keela is a low priority…or so she thinks. Alec Slater is a bachelor, never one to bed the same woman, or man, twice. He is a free agent who does what he pleases and answers to no one; that is until a fiery Irish redhead with a temper to match her hair colour knocks him on his arse. Literally. She hates to admit it, but Keela needs a favour from the cocky Slater brother, a huge favour. She needs him to not only escort her to Micah’s wedding, but to also pose as her boyfriend. Alec agrees to help Keela, but has certain conditions for her to abide by. He wants her body and plans to have it before anyone can say I do. What he doesn’t plan on is losing his heart as well as the possibility of losing his family when someone from his past threatens his future. Alec owns Keela, and what Alec owns, Alec keeps.

Keela Daley is stressed out with nightmares and memories from her past, they are haunting her. She has no time to dwell on them as she is moving out of her dog box sized apartment and into her first house with her fiancé. Moving house is a dreaded task, and Keela would love nothing more than for things to go quietly and smoothly, but when you’re engaged to a Slater brother, nothing goes quietly or smoothly. Nothing. Alec Slater loves his woman. He also loves playing games and surprising her. Picking moving day to do both, turns out to be a failure of epic proportions. Alec wants to make it up to Keela for his mistakes, but as the day goes on, and things go from bad to worse, he doesn’t know if living with him is something she wants anymore. What started out as a simple day of packing and moving house turns into the day from Hell. Unwanted house guests. Business propositions. Alcohol. Pregnancy tests. Panic attacks. Fighting. Arguing. Sex, and everything else that is crazy and represents the name Slater. Keela has a choice to make, and not one she will make lightly. Keela adores Alec, and what Keela adores, Keela cherishes. 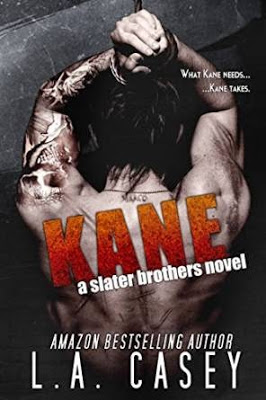 Aideen Collins is a free spirit. She is outspoken and tough as nails, but she has to be after growing up in a house full of men. Family means everything to Aideen. Her family consists of her four brothers, her father, and her group of wild friends. Aideen is protective of her family, there is not a lot she wouldn’t do to keep them safe.

Kane Slater is a tortured soul. Literally. He is misunderstood by people, even feared by them thanks to the scars that mar his face and body. He relishes in their fear because people who fear you, won’t want to know you. He likes his circle limited to his brothers and their girlfriends, but a thorn from an Irish rose is dug deep into Kane’s side, and her name is Aideen Collins.

Aideen and Kane don’t get along… at all. Aideen is the only woman who stands up to Kane and throws his bullshit back at him without fear of hurting him. Kane is the only man who can see right through Aideen’s tough exterior. He knows her deepest, and darkest secrets. They can’t stand each other, but they want each other. Badly. They hide their need behind arguments, and banter, but when Kane drops his guard for all to see, and succumbs to an illness within his body, it’s Aideen who steps up to the plate to take care of him.

An illness is the least of their worries when a devil from Kane’s past comes back to play with him. Everybody in Kane’s life is threatened, and with his body fighting against him, he doesn’t know if the luck of the Irish is enough to keep his family safe and his demons at bay.

Print Link
—–> REVIEW OF THE SERIES <—–
We first meet Dominic and Bronagh when they are still in high school. It was hate at first sight with a healthy dose of lust thrown into the mix. These two bicker, name call, and basically give each other hell. It’s basically watching an the Jerry Springer show but with way, way hotter people. (No offense to whomever has been on the show.)
Anyways, you might think at eighteen, two people can’t realize they met “the one”. However for those two, that is exactly what’s happened. In a short span of time, they’ve dealt with mundane high school drama and the mob. And that was only in book one.
In book 1.5, we fast forward three years. Nothing against teeny bopper books but I was relieved to have them aged. I say aged because they didn’t really mature much at all.
They still bicker which is just how they roll. You can tell they don’t mean it because their mouths and other body parts tend to be fused together after a “name” is dropped.
An example of the love between these two: One of Dominic’s birthday presents to Bee “100 Reasons Why I love You”. Dominic, or should I say L.A., was extremely creative here. I laughed, rolled my eyes, and smirked several times over.

Book 2 and 2.5) Alec was very adorable. I can see why Keela likes him/falls for him. However, when they first shagged I kept thinking how many holes that man filled while being an escort. Yes, he admitted to sexing many, many a man and woman. Quite a few at the same time.

Alec may be sex on a stick, funny as hell, but I couldn’t find enjoyment in their love scenes because I was stuck on his number and what might be growing on his schlong, unlike Keela. I know he wore a condom with Keela but still, what holes he filled over the past decade filled my mind. No pun intended. 🙂

With that said, I thought the packing game was hilarious. Never a dull moment with these ladies and gents.

Now onto the latest tale, Kane. This story I enjoyed immensely. Kane was the sweetest, funniest, but the most damaged brother. He had physical scars with emotional scars to match. I think he hide behind his sense of humor. Good thing he had Ado, whom saw through his bullshit.

As for the overall read of this story, I laughed on many occasions. Too many to count. And I got misty eyed towards the end.

It was a brilliant read with a happy ending. *smiles*