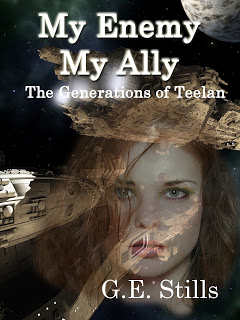 At fifteen, Rho’naa enrolls at the Institute of Defense. During her time at the institute she undergoes intense physical training, schooling and surgical alterations. Now, five years later, she is graduating and has become a highly intelligent and deadly living, breathing killing machine. Just before her graduation, her best friend is taken captive. Rho’naa’s first assignment is to rescue her.

A team is formed to accomplish that rescue and she is put in charge. One member of that team is of the Men-gar species, humanities dread enemy. Although half Men-gar herself, Rho’naa has grown up loathing Men-gar with every fiber of her being. Will she work with him, or will she kill him? To make the situation worse, a new and terrible danger has arrived in the universe. A threat that may result in the extinction of both Human and Men-gar.

Rho’naa hesitated before knocking on the door to Kyra’s office. Since completing the trials on Euganta she had been patiently and waiting for assignment. Both of her companions had already received theirs and were gone. This must be it. I wonder where I’m going?

Coming to a halt in front of the desk, Rho’naa saluted. “Reporting as requested ma’am,”

Kyra returned the salute. “At ease. Have a seat. We have a lot to discuss and much of it is unpleasant.”

This is not how I expected this meeting to begin.

“I’m going to start with the bad news,” Kyra said. “Tylee’s ship never reached Zanatha. In the past we suspected the Men-gar attacked and destroyed it and all hands.”

Rho’naa’s stomached lurched and twisted in a knot. Tylee dead? Oh no, oh God no.

“This is the supposition we had until the occurrence of recent events,” Kyra said. “A month ago we recovered a Men-gar warship. We discovered it adrift with all of her crew missing. Further investigation has revealed the ship was attacked but it is largely undamaged. All the crew are missing however and by the bloody evidence found throughout the ship they are presumed dead. This attack was not our doing.” She shoved a folder across her desk. “This file contains a detailed report on the findings. I expect you to read it tonight.”

Rho’naa reached out and picked up the folder.

“This is not the only thing that has occurred.” Kyra pressed a button set in her desk and addressed the surface. “Keish’ar will you join us?”

A door at one side of Kyra’s office opened. It took every bit of discipline Rho’naa could muster to remain in her chair and avoid leaping from her seat to enter attack mode when the tall alabaster white being joined them.

Men-gar! she hissed mentally. What’s this thing doing here…alive? Millions of years ago, this species tried and almost succeeded in destroying all intelligent life on Earth. They tried again a few years ago. Since early childhood, I’ve been taught to hate these loathsome creatures.

Her eyes darted to Kyra searching for an answer to her question. Her fingers turned white as her grip on the chair arms tightened.

“Have a seat Keish’ar and I’ll fill Rho’naa in with the rest of the story.”

Rho’naa shifted her attention back to Kyra while keeping an eye on Keish’ar.

“A week ago we intercepted a summons for help. To our surprise, the broadcast came from a Men-gar ship and was directed toward our location in space. We rushed to investigate and found Keish’ar in a failing lifepod. He told us a story that I even yet find difficult to believe but extensive tests, which he volunteered to take, have shown he is telling the truth.”

From the corner of her eye, she saw Keish’ar shift in his seat.

The words extensive tests caused a shiver to run the length of Rho’naa’s spine. Although ninety percent accurate, some of those tests were decidedly uncomfortable for the individual taking them. And he volunteered?

“He told us of a race of insect type beings. They invaded his home planet and subdued it in a matter of hours. They have a weapon that renders most if not all electronic equipment inoperative.”

Other than the weapon, it sounds much like the Men-gar. She didn’t say anything but she was certain Kyra knew what she was thinking.

“We are enemies but I think you should know,” Keish’ar said, “They eat their captives. We had human slaves on Sto’kan. They do not distinguish one of our species from yours. They eat both.”

“Why did you come to us? Why not go to your own people?”

Keish’ar looked at his feet and mumbled, “First because your area of space is closer… But more importantly, I think humans have a better chance of defeating them than we do. You’re winning this war you know. The Men-gar can’t defeat you.”

Rho’naa sat back in her chair for the moment speechless. To hear a Men-gar admit they were losing the war was unbelievable.

Keish’ar continued, “They must have a shield of some type because although nothing electronic of ours worked, theirs did.”

“So we need to capture one of their ships and duplicate the shield. Where do I come in? It sounds like a navel operation to me.”

“But one of your ships would never get close enough to capture an enemy ship before all the electronics were rendered useless. That’s where we come in.”

“You, I and a small team,” Keish’ar said. “Their large ships are in orbit around the planet but smaller ships are on the planet itself. I think I can get us close enough to steal one.”

“And then what? From what you describe these small ships are like shuttle craft how are we supposed to get away into deep space?”

“They are interplanetary capable. We had a base on the moon. The small craft are able to fly from the planet to there. If they can go that far, they can probably go further.”

“Sounds like a lot of guessing to me,” Rho’naa snapped while glaring at him.

“I’m willing to risk that my guess is right… Are you?”

A scowl from Kyra caused Rho’naa to squelch her retort. The chair arms creaked as her hands tightened and her enhanced strength left deep finger impressions in them. Just in time, she relaxed before shredding the chair arms and forced herself to remain seated. How dare this vile being question my bravery?

“Tell her what else,” Kyra said.

“Kyra tells me you have a good friend that looks feline.”

Rho’naa narrowed her eyes. “If you have harmed her I will kill you where sit before Kyra can prevent it.”

Now that you’ve had a sneak peek at G.E. Stills hot new book, My Enemy My Ally , WHO IS READY TO WIN?

Ladies and Gents, G.E. is offering ONE LUCKY WINNER a chance to receive a KEYCHAIN. 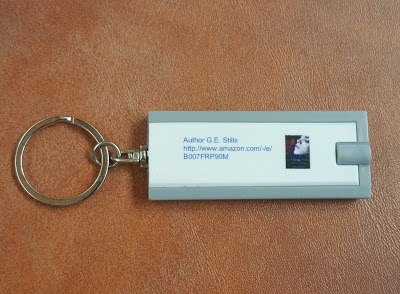 To enter, all you have to do is leave a comment, question, or simple say hi. EASY PEASY, RIGHT!


You’ll have until WEDNESDAY (midnight, central time) to enter. THURSDAY morning, I will post the winner’s name and message you. Be prepared to send your mailing info because without it G.E. won’t be able to send the wonderful gift.