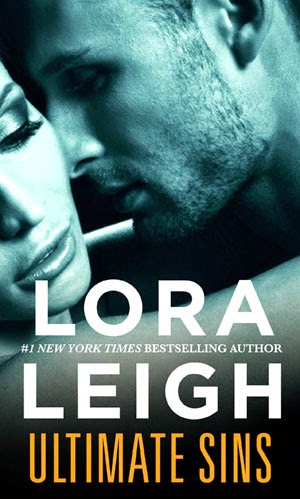 Ex-Marine Crowe Callahan has only had one obsession in life: Amelia Sorenson. She is the only one who has ever gotten under his skin. However, she is also the daughter of his family’s sworn enemy: a man who has sought to destroy the Callahans for generations in order to further his own nefarious agenda.

When Amelia put herself on Crowe’s side and in Crowe’s bed, she became her father’s enemy as well. When Wayne Sorenson escapes capture, both Amelia and Crowe know it is only a matter of time before he resurfaces to exact his revenge. Now Crowe will claim Amelia in order to bait a killer and end things once and for all. But can he protect the woman he can’t seem to live without from one of the deadliest enemies he has ever known? And will he survive if he can’t? in Ultimate Sins.

(Warning: Spoilers Included!!)
Lora Leigh can write a love/sex scene. I mean, I’d be hard pressed to find anyone who would refute that claim. However, I needed/wanted the scale of sex to storyline tipped more in favor of the plot. In my estimation, the story encompassed about 85-90% sex. Now for most people, this wouldn’t be a problem. However for me, I was hoping the percentage would be cut by 30 points. I was highly anticipating Wayne’s downfall and felt let down.
Only one other thing bugged me enough to discuss. Crowe “suspected” Amelia was pregnant based off her departure and the lack of paper trail no investigator, not even he, could find.
Ok, granted he returned many years after the pregnancy but if you are like me, your body changes after the birth of a child – regardless if the baby is premature or not. For her not to have any physical signs of ever giving birth is remarkable. Ok maybe she worked out like crazy (not noted in book) and had a tight ass stomach (don’t recall mentioned). Maybe she didn’t have a single stretch mark (now that’s plausible for sure).
But, I’m still not buying it. But anyways……enough about that!
Time to move onto happy thoughts…….
Since I believe all reviews should have positive remarks in them, I will discuss points that stood out to me.
My heart broke as Thea retold the night Kimmy was born. I felt every bit of the pain and anguish Lora was trying to portray to us readers. I was drawn in; caring for imaginary characters who suddenly appeared so damn real. BRAVO LORA!
As for Kimmy, I love that firecracker. She is going to be a handful for many years to come. Poor Crowe. 🙂
Heart rating system:
1 (lowest) and 5 (highest)
Score: ❤❤❤❤
Amazon Purchase Link