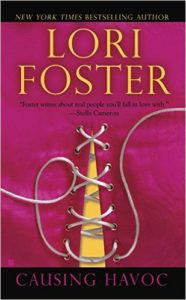 Sexy, sculpted extreme fighter Dean “Havoc” Connor has knee-melting good looks-and thick skin. But not from his brutal sport’s enclosed rings. Orphaned and torn from his sisters as a boy, he has no family. That is, until he gets a letter revealing how much the once-little girls want him back in Harmony, Kentucky.
To stop his sister from marrying a man as sleazy as he is wealthy, Dean finds himself teaming up with her pretty-but-smart-mouthed friend Eve — who’s heard of “Havoc’s” reputation and doesn’t need some hunk trampling on her heart. Now all Dean has to do is protect his sisters, win Eve over, and expose a devious criminal.
And he thought winning the heavyweight cage fighting belt was hard.

Review
Many, many times, a friend of mine suggested I should read the creations by L. Foster. Finally my stack of books dwindled down and after a quick trip to the bookstore, I had in my hands the entire fighter series.
I must say, I’m pleased with my first taste of Lori. (Gee that sounded way dirtier than I intended.)
Dean was a such a lovable man. Yeah, a big ole teddy bear who could make you submit, on and off the mat. Yeah folks, I meant that to sound dirty.
I also enjoyed the supporting cast in this story – Gregor, Roger, Eve, Jacki, and Simon…. His brief appearance and the ladies’ reaction to him made me eager to start his story right away. (See thoughts on his story below) From the New York Times bestselling author of the Ultimate series, a former MMA fighter returns to the ring while a beautiful investigator watches his every move…

With his perfectly chiseled, lava-hot body, Simon Evans, ex-fighter, also has a perfect life—great job, great girl, and more than enough dough. All that changes, though, when he catches his girlfriend cheating. To shake things up, Simon goes full-force back into the ring, ready to take out his rage on his opponents…

To make matters worse, the father who walked out on Simon and his mom eons ago wants to be back in the picture. He’s hired his stepdaughter, Dakota, to find Simon. Hot on Simon’s heels, the gutsy P.I. puts love on the back burner. But when attempts are made on Dakota’s life, Simon steps in to protect her, all but putting both their hearts on the line…
Brief Impression

Ok, Simon is fantastic. No doubt about it. But Dakota…. that girl is badass.
I was mentally cheering when she kicked the living shit out of her ex-abusive husband. Marvin learned the hard way that KARMA IS A BITCH!