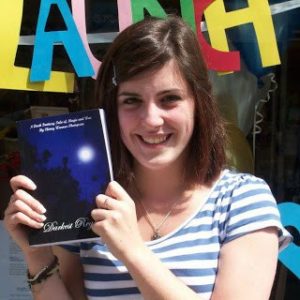 I was born in Shropshire in the West Midlands in 1991 where I am still currently living, growing up alongside one younger and three older brothers.

Books and writing was an interest that I began to develop from the first years of secondary school, and on my thirteenth birthday, I began to plan and design the idea to write a fantasy novel. I finished secondary school with high GCSE’s and then went on into further education to study English and all aspects of art and design. After six years of writing, planning and overall editing of the book, it was successfully completed, containing over 82,000 words, and self published in the first week of 2011.

With high expectations in myself, I immediately began to write a second novel in the series, while keeping my art and design a part of the process. The achievement of completing the first novel ‘Purest Light,’ allowed the ideas of the second to flow much easier and it was completed by early 2012. As I was writing the third and final book, New Beginnings, at the same time, the series was finished by its publication in 2012/ 13.

Writing is now a part of my everyday and I have started on my newest project, Shadows, which is also planned to be the first of three. Only time will tell.

~ Series Blurb~
When a brother and sister from a small village fall upon an angel, blessed with the ability to fly and conjure magic, they are thrown into a world beyond their understanding, and so begin to venture from their simple lives into a war between Light and Darkness. They come to realise that their lives were never mapped out as simple mortal destinies, but rather that of two warriors, with a fate to end the unseen suffering of the land.
Along the path that they decide to follow, they meet further Seraphim and others who offer their help, but not everything is gained; friends and family are lost. Their very souls and hearts, and that of their friends, are thrown into an aeon old war between Light and Darkness. Filled with feelings unknown to them, they must decide which element is to be superior and survive from their seemingly never ending task.
Will they reach the edge of their world to restore the balance, or will they fall and be defeated by Darkness?
Purchase Links