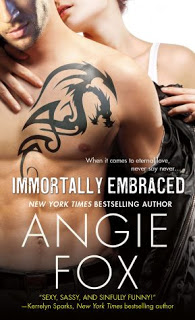 IN THE BATTLE OF THE SEXES…Even during a truce, Dr. Petra Robichaud has her hands full as the MAS*H surgeon to an army of warring gods—especially when Medusa herself turns up pregnant. Petra has no idea what to expect when a gorgon’s expecting, but she won’t let it turn her to stone. As the healer-hero of an ancient prophesy, it’s Petra’s job to keep the peace. But as the lover to a warrior demi-god, she knows how impossible some jobs can be…

IT’S EVERY GOD FOR HIMSELF. Commander Galen is sexy, strong, and sworn to lead his team to hell and back. But when he announces to Petra that he can no longer risk her life for his love, the doctor is on her own…Until a mysterious new entity—in the form of a hot-blooded male—enters the picture. Can he be trusted? Can he be resisted? Meanwhile, an oracle delivers another prophesy that places Petra back on the frontlines with the man she may be bound to for eternity—in love, or in war…

I have been a huge fan of Angie ever since I stumbled across her Demon Slayer series, which by the way are wicked good books. Check them out!
The second installment in the new series, sequel to Immortally Yours, has everything Angie’s fans have come to love about her writing/stories – humor, sexiness, and action. She’s highly creative with her characters and plots. Example – a pregnant Medusa. Yeah, wrap your head around that one. 🙂
Since I’m not one for spoilers, I won’t say WHO is keeping Petra company in and out of the sheets. But I will say, you will find out rather quickly and I doubt you will have seen it coming.
After reading this tale, I had only one question that was nagging at me. I have to know the answer so Angie, if you by some chance read this review, PLEASE TELL ME WHAT THE HECK IS A REVERSE ZEUS! The mention of that sexual position had me laughing hard and envisioning things that would make some people blush.
Heart Rating System:
1 (lowest) and 5 (highest)
Score: ❤❤❤❤❤