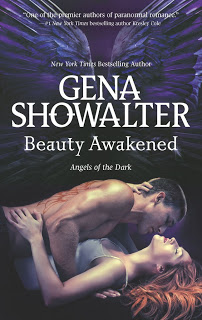 His name is Koldo. He is scarred, powerful, his control legendary-and he lives only for vengeance, determined to punish the angel who viciously removed his wings. But if he yields to the forces of hatred, he will be kicked from the heavens, eternally damned.

She is his last hope. Nicola Lane was born with a defective heart, yet this fragile human shows surprising strength as demons stalk her every move, determined to end her. She is the key to Koldo’s deliverance…and his downfall. Though he fights duty, destiny and his first addictive taste of desire, his toughest battle will be the one for Nicola’s life-even if he has to sacrifice his own….

Koldo’s backstory is beyond horrific. To be physically and verbally abused by your parents, to crave their love but be denied – heartbreaking. After all he had to endure in his life, Koldo came close to letting his anger and revenge cloud his heart completely until Nicola entered his life and captured his heart, imprinting herself in his soul.

As we know from Gena’s other stories, her female characters are not weak. Nicola’s path took a surprising turn towards the end of the book and I know it will please many readers.

Now for those who are having Lords of the Underworld withdrawals, William of the Dark aka  the Ever Randy does make a cameo appearance. The passage with him and Thane is short but highly entertaining.

The final pages of the story will definitely make the Lords fans happy. Oh Kane, I can’t wait to dive into your story, The Darkest Craving. (July 30th, 2013)