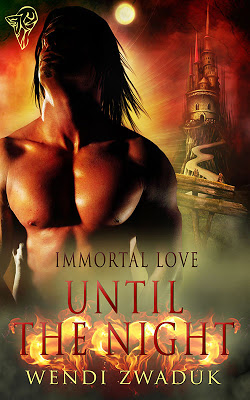 Having a mate can be a pain. Having three…now that’s unheard of…

Gypsy volunteered to become a vampire, but she had no idea just what she’d agreed to do. As a human, she’d had her pick of willing males to warm her bed. As a creature of the night, she’s striking out.

Until she meets Kendall. He knows what she is and doesn’t care. He’s loved her since he met her, but he had no idea just how complicated her life truly was. Her protectors refuse to leave her side. But what if he wants them on his side, too?

Allan and Todd are mates, plain and simple. Gypsy is in their charge. Period. Until they start to see her not as a problem, but a sexy solution complete with an adorable human thrown in for fun.

Can they come together as a foursome or will they destroy everything they’ve built in the name of passion?

Gypsy sang the song she’d made up to herself and shimmied in her cage. The patrons around her gyrated and waved their hands in the air. Smoke billowed from the machines by the DJ table and floated out over the crowd. Lights flickered over the sea of bodies, but the scene around her didn’t capture her attention.

Someone touched her foot. When Gypsy glanced down to the bottom of the cage, her relief, Alyssa, one of the other dancers, offered a lopsided grin. “You can go now.”

When the song ended, Gypsy opened the catch on the cage and stepped into the main room. Most nights, the allure of the Chatty Catty Club suited her. Not tonight. She stared at the bar. Allan wasn’t standing in his regular spot at the far end by the kitchen doors. Another bartender was working the margarita machine. Todd wasn’t at his post by the main entrance, either. Two muscle-bound men hulked on either side of the double doors. Where the hell were her best friends? Probably off with some sexy club girl wanting a good time. The Goddess knew Allan and Todd liked to have a good time.

Allan and Todd had their pick of the women who frequented the club. Both of them spent lots of time with Gypsy, but neither wanted anything other than friendship with her. She wanted more—Todd behind her, Allan in front while they pleasured her. Then in reverse. Except she’d never bothered to tell them how she felt.

Sighing, Gypsy hiked the bodice of her top up to cover another inch of her cleavage. Her inner wrist brushed her nipple through the thin fabric. She shivered. What if the objects of her desire touched her? Her pussy quivered and her fangs elongated in her mouth. She needed blood and sex. Preferably from someone who understood her new vampire nature—a man, or two, to love her. Going without blood for nearly a week hurt. Her body constantly ached, she wobbled in her cage and her focus flailed…but, damn it, she refused to hunt.

If someone had told her when she’d agreed to let Jamison change her that her life would never be the same, she would’ve dug in her feet and not have become a vampire. She didn’t mind sleeping during the day and partying all night, but the cuisine choices sucked. Either kill to eat or beg a human to allow you to bite them—and if that didn’t work then she got to starve.

What if I want a steak? Or a daiquiri?

Thinking about food wouldn’t help matters, anyway. She shoved the thoughts aside and strode to the bar. A woman from the fringe of the crowd stopped her. Her dark eyes glittered in the flashing blue and green light. “Care to dance, sweet thing? Aren’t you…mmm…sexy?”

Her smile, wide and bright, didn’t do anything for her. Sure, she embodied sex with sumptuous curves and beautifully shaped breasts, but Gypsy didn’t do girls. Not usually. Moreover, her admirer wasn’t Allan. Or Todd for that matter. The guys understood her. Hell, they intrigued her. They made her body quiver in all the right places with just a look. The chick smiling at her? Nada. If anything, she was creeped out.

“Thanks, but no thanks.” She brushed by the woman and stepped forward.

“You’re here to entertain. Entertain me.” She dug her fingernails in Gypsy’s arm. “I want to see something sexy. Do it.”

Her growl chilled Gypsy’s blood. She caught the distinct whiff of fruit. Oranges? Gypsy ground her teeth together. O’Toole had smelt of strawberries, but she’d seen her sister destroy him.

“Look, asshat, this isn’t a tittie club. It’s a dance club. Skin, yes—sex, no.” Gypsy shrugged out of the woman’s grasp. “I’m not interested and I will use my boot. Got it?”

The woman’s eyes flashed and she tipped her head once in a jerking motion. “Whatever, bitch. You will.”

7 Responses to Author Showcase – Wendi Zwaduk (Until the Night)