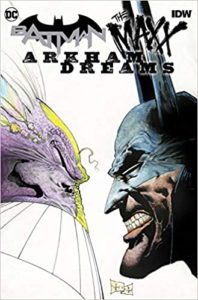 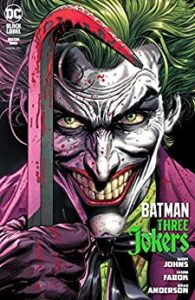 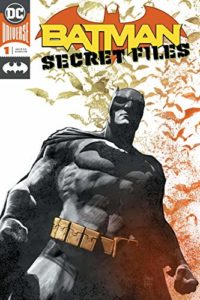 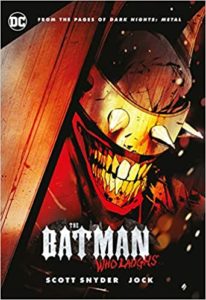 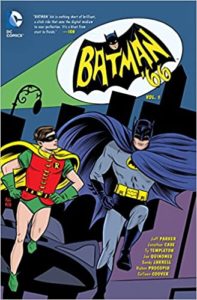 The Batman Who Laughs by Scott Snyder (Comic Book Showcase) 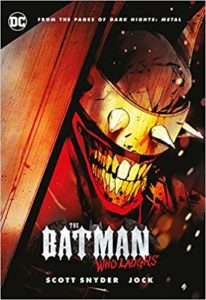 Left rattled by the events of Dark Knights: Metal, Bruce Wayne must come face to face with the ultimate evil spawned from the Dark Multiverse. One part Batman one part Joker. The Batman Who Laughs.

The mastermind behind Dark Nights: Metal, Scott Snyder, gives you a look inside the most terrifying version of Batman ever! He and superstar artist Jock (Batman: The Black Mirror) kick off a chain of events that makes Dark Nights: Metal seem like child’s play.

The Batman Who Laughs not only survived his fight with The Joker at the end of Dark Nights: Metal, but is now enacting a sinister plan across the Multiverse–something both terrifying and oddly familiar. When Bruce Wayne realizes the only way to stop this madman is to kill him, he must consider violating the very rule Batman can’t ever break … the rule that created this insatiable villain–the Batman Who Laughs!

As Bruce begins to deduce that his current life is somehow wrong and that all the mistakes he’s made are somehow connected, the Batman Who Laughs unleashes a brand-new evil. Enter one of the most punishing Batmen of the Dark Multiverse: the Grim Knight!

Collects The Batman Who Laughs #1-7 and The Grim Knight #1. 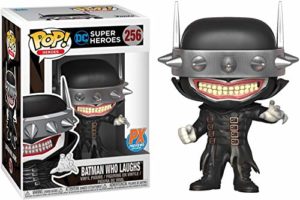 Scott Snyder is one of comics’ bestselling authors. His works include BATMAN, AMERICAN VAMPIRE, THE WAKE, SUPERMAN UNCHAINED, SEVERED, and WYTCHES among others. He has also been published in Zoetrope, Tin House, One-Story, Epoch, Small Spiral Notebook, and other journals, and has a short story collection, Voodoo Heart, which was published by Dial Press in 2006. He has taught at Columbia University, Sarah Lawrence University and NYU and lives in New York with his wife, Jeanie, and his two young sons.

Jock is the three times New York Times best-selling British artist best known for his comics work with writer Andy Diggle on DC/Vertigo’s The Losers, the award-winning Batman: The Black Mirror, and Wytches with writer Scott Snyder. Jock has also produced key art and concept design for films including Dredd, Annihilation, Star Wars: The Last Jedi, and the Oscar-winning Ex Machina. Born in Glasgow, Scotland, he now lives and works in Devon, England.