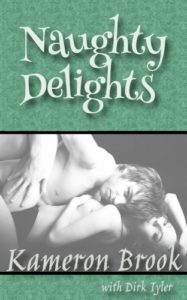 It’s grand opening day of Guilty Pleasures, and Donovan is there bright and early with his best friend Jackson. He came to show support to Jackson’s girl, Felicia and maybe grab a sugary treat. Little did he know he’d find something sweeter than anything offered on the menu board – the woman of his dreams
Kindle Purchase Link

This is it, Elizabeth thought as she pushed through the door to deliver a large batch of chocolate and vanilla sugar cookies to the display case. It was grand opening day for Guilty Pleasures, and she couldn’t be more excited or more nervous. Years of scrimping and saving had accumulated to this day. In a matter of minutes the bakery would be open for business, and their city would officially have their first taboo sweet shop.

Elizabeth took one final look around, making sure everything was perfect, when Felicia, her business partner and friend, appeared next to her, chomping on a fornication cookie.

Out of all the sugary creations crafted for the shop, Elizabeth and Felicia would agree these were the most fun to develop. They spent many wine-filled nights brainstorming and researching ideas for the inserts.

“What’s it say, babe?” Elizabeth asked, nodding toward the paper in Felicia’s hand.

Felicia laughed and read the naughty message, “Two heads are better than one, but three, now that’s what I call a party!” As she tucked the paper into her back pocket, she asked, “I forget. Was this yours or mine?”

“I actually think your man deserves credit for this one.” Grinning, Elizabeth grabbed the sampler plate off the counter and walked toward the front door, turning to take one final look around before the place filled up. She couldn’t be any prouder of the decor in her little slice of heaven. She glanced to her left and smiled proudly as she admired the photos on the wall.

The food photographer they had hired did a fantastic job capturing the beauty and sexiness of several corset cakes available for purchase. But the icing on the cake, so to speak, was the mural to the right of the entrance. A local artist painted “What Are Your Guilty Pleasures” but the letters were actually naked people in compromising naughty positions.

Felicia giggled. “Oh yeah, it’s all coming back to me now. We definitely drank way too much that night.”

Nodding in agreement, Elizabeth turned on the neon sign and opened the doors for business.

Already, a few eager customers were waiting by the window. They actually applauded when Elizabeth stepped out of the shop door. She greeted them with a smile and offered them their choice of iced cocks or boobs. She wasn’t surprised the guests blushed when they made their selection and bit into the cookie. She expected to witness many rosy cheeks in the hours ahead of them—giggles too.

As the streets began to fill up with people going to work, Elizabeth tried to coax even more passersby into the shop with her funny shout-outs such as: “I bet our peckers taste as good as your man’s. No wait, even better!” And, “Our breasts are fantastic and all natural.” All the while she held up a naughty treat.

After the bell dinged behind her a couple dozen times, she realized the humorous approach to draw in customers was working like a charm. Now with them inside, she had no doubt every person who’d entered the shop erected from her dreams would be a repeat customer. And with this thought, she knew the many dinners of Ramen noodles were well worth the discomfort it cost her over the years.