Seekers: The Winds of Change by Troy Knowlton (Book Review) After an assassination attempt that could lead to an all-out war, Tyras and Oren, two young Seekers of the Argan Empire, are each given secret missions in an attempt to thwart the coming chaos. Both tasks require the Seekers to venture through the war-torn continent of Tiarna where the young men face mortal danger, horrible monsters, and hostile groups – all challenges Seekers are trained to combat. Luckily, the two Seekers also find guidance, friendship, and romance along the way. However, powerful and mysterious forces are conspiring behind the scenes and both Tyras and Oren will have to overcome a host of obstacles, including their own inner demons, in order to maintain a glimmer of hope for success. With war imminent and the unknown ahead, will the Seekers triumph, or will they be swallowed by the turbulent, relentless Winds of Change?

Set in a new, masterfully created high fantasy world, Seekers: The Winds of Change is perfect for fans of An Ember in the Ashes by Sabaa Tahir and We Free the Stars by Hafsah Faisal. 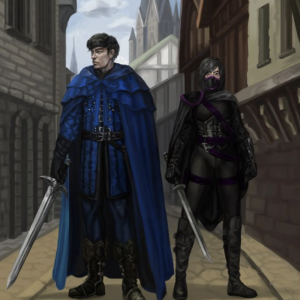 The Winds of Change by Troy Knowlton is advertised as a teen and YA fantasy book, but I think many adults will find this an exhilarating read. It did not lack action sequences. Various weaponry was used in battle: swords, arrows, cannons, bombs, and spears. Tyras and his fellow travelers faced dangers from humans, but they also had to face off against creatures. While the giant lizard (Widower) and scorpions (Barbarians’ mode of transportation in battle) would be frightening to encounter, I found the guglanni terrified me the most. They can eat through metal cages. Imagine what these oversized worms could do to a human bone. They are the stuff of nightmares! Plus, worms are just gross.

This story did have life-and-death situations and multiple losses, but it also has romance. The scenes are not graphic, but I would suggest a parent read this book first to ensure their child won’t have an issue with the more intimate settings. As I stated in my opening sentence, this book is written with YA and teens in mind, but every child’s comfort zone is different.

I know this book is a fantasy book, but I did have an issue with how the aftereffects of altercations were handled. For the most part, people got over severe injuries rather swiftly. I wouldn’t like to see the injuries restrict their ability to perform at their peak in the next battle. The pace of the book also seemed to have one speed. It was one life-and-death encounter after another, which is fine if that’s what you like.

If you like fantasy books with a hint of romance, action, strong female characters, and quick-paced with surprising plot twists, please consider picking up The Winds of Change by Troy Knowlton!

Troy Knowlton always had a burning desire to tell stories. He started at a young age by drawing maps of made-up continents and fantasy kingdoms. The empty kingdoms beckoned to be given life, and his work eventually blossomed, leading him to create full narratives and characters for his worlds. He currently lives in California where he works as an X-Ray technologist and teacher when he isn’t writing. He’s also a great lover of history, currently working to earn his bachelor’s degree in History and Political Science.