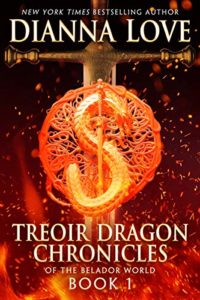 New York Times Bestseller Dianna Love has a brand new series from the Belador world for first time readers as well as current Belador fans and it’s full of explosive reveals. Dragons didn’t just show up out of thin air centuries ago and not all of them died in the Dragani war.

Atlanta hovers on the edge of chaos and pandemonium as rumors fly about supernatural beings living among humans. Deadly preternaturals predators have been held in check for many years by the most formidable pantheons. One angry being has had enough and accesses majik of an ancient grimoire to release abominations capable of taking down the most powerful of humanity’s supernatural protectors.

As the dragon-shifter king over Beladors living secretly among humans, Daegan is tortured by having failed to save his loved ones two millennia ago when a vindictive goddess captured him. With a second chance at life, he’s vowed to protect his new family and destroy anyone who harms them. He’ll have to find all the parts of a grimoire divided up and hidden thousands of years ago for any hope of saving his captured people and a world ready to launch high-tech weapons to wipe out unnatural beings.

The entire human race has one hope of surviving what’s coming for them, but only if fear of the unknown does not drive the humans to kill their greatest protector first.

This is book 1 of a 9-book spinoff series for first time readers as well as current Belador fans. All 9 books will release within a year and be available in e-book, print, and audiobooks.

Every major war and crisis can be traced to a specific moment in time.

During the medieval time of chieftains and kingdoms in ancient Ireland, betrayal triggered a dragon war and consequences have rippled through time to today’s world. A supernatural being on a path to expose nonhumans is sparking chaos across the world with Atlanta at the epicenter. Powerful preternatural beings have waited patiently for an opportune moment to strike at their enemies and with no regard for human casualties. Now is the time.

The Belador supernatural race living secretly among humans freed a cursed dragon shifter, who now reigns as their king. Daegan takes a stand to fight for his nonhuman followers as well as vulnerable humans. Tortured by what he lost two millennia ago, Daegan has vowed to destroy any who threaten his new family and allies.

Atlanta and the entire human race have one hope of surviving what’s coming for them, but only if fear of the unknown does not drive them to kill their greatest protector first.