“I’m a spider, sugar. My shaper kind doesn’t bear that name for nothing.”

That’s not something Alexis Harper dares to say very often. If she did, it might just get her killed. Not that she is an easy mark, but even fools get lucky once in a while.

In a world where the magically gifted trueborn rule and the magicless halfborn slog away in the slums, half-blood mongrels like Alex are outcasts—feared and shunned. For most of her life, she has lurked in the shadows, trying to keep her true nature a secret. But the secrecy ends abruptly when she saves two trueborn aristo children from a group of hired killers.

Accused of a crime she didn’t commit, Alex suddenly finds herself running from powerful enemies, with no one around to trust. Or what about the mysterious stranger who has been following her? He is one of Death’s Servants, born and bred to kill at the country’s command. Not the most preferable ally, but then, her choices are limited. Soon she has to decide whether she can trust him or not—it’s a gamble she might not survive either way. And before Alex knows what is happening, her life is hanging by a silken thread…

THE room was long and sterile and reminded Alex too much of a hospital: white tiled floor, metal shelves, slim silver objects glinting dully in the too bright overhead lights, the biting scent of disinfectant … It brought back memories of her sire’s bedroom just before he died, and she instantly felt sick to her stomach.

Dr. Creevy, a scrawny man with thinning gray hair, in a stained white lab coat, stood waiting beside a naked metal cot with leather shackles attached to all four corners. Alex felt Darken stiffen beside her and quickly put a restraining hand on his arm—just to pull back when a little shock tingled through her fingertips.

“It’s alright,” she muttered softly, although her stomach churned at the sight of the cot. “I might shape during the process and accidentally hurt someone.”

Darken’s eyes wandered from the cot to her and back, and slowly widened in understanding. “You’ve done this before.”

She nodded. And no pleasant memory was linked to the experience. But sometimes there simply was no other choice. Like right now.

He studied the cot again and she could almost hear the blocks falling into place as he drew the right conclusions. His eyes narrowed and grew darker. Dangerously dark. “And this will hurt you.” It wasn’t really a question.

Quite quick on the uptake, aren’t we, Mr. Trueborn?

“I’m afraid that can’t be avoided.”

Resentment flooded those cavernous brown eyes, liquid red anger churning right below the surface. “Then there has to be another way.”

Alex blinked. Just like that, huh?
He did sound like he meant it, too.
Why? she wondered. To assume that her pain would matter anything to him, would be foolish. They barely knew each other. And she hadn’t exactly done a great job endearing herself to him in the past day.

Maybe he didn’t like to be indebted. She certainly didn’t. And a debt of pain wasn’t one easily paid back.

“Well, I don’t really see another way, sugar. Do you?” Now would be a good moment to mention it.

He scowled. Yep, that’s what I thought.

His gaze went back to the cot and his lips pressed together in obvious discontent. “I don’t like this!”

She barked a short laugh. “Neither do I, sugar, but if we want this portal, someone will have to bite the bullet. Looks like that someone is going to be me. But don’t worry, it won’t kill me—and if it does”—she raised her arms and batted her lashes at him—“spares you the effort.” 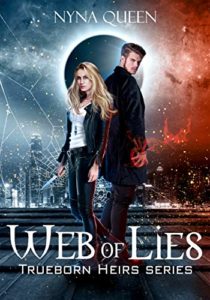 A royal gathering. She isn’t invited. And if they find her, they will kill her…

Against all odds, Alex Harper survived her deadly wounds and managed to shake off her faceless pursuers. But she is hardly safe. With a death sentence looming over her, she must quickly find out who is pulling the strings in this twisted game she has become a part of – before they catch her. But that means infiltrating the trueborn royal elite; a glamorous world that possesses no love for shaper mongrels such as Alex. One wrong step will be the death of her.

To make things worse, she has to work with Darken again. Now back in trueborn territory, the scorching hot Deathbringer has retreated behind his armor of fire and the class difference between them becomes painfully obvious. Can their feelings for each other survive this growing gulf? Not that it will matter if Alex’s self-control isn’t good enough to pass for a member of the elite, and in the Royal Palace of all places! Caught between dark secrets and political intrigues, Alex soon realizes that she has entangled herself in a deadly web of lies…

What readers of the series say …

Nyna started reading fantasy books at the sweet age of six (in fact, as soon as she could read) and never got out of it. After she finished her law degree, she finally decided to commit herself to a career as an author. When she isn’t reading a book or dreaming up another story, she works as a lawyer, indulges in way too much coffee and enjoys long walks in the sun. If you are looking for Nyna, you’ll likely find her behind her laptop, hitting the keys, writing down her latest novel ideas – careful, if you speak to her now, she might not remember later!
Social Network Links:
Amazon Author Page
Website
Facebook
Instagram
Goodreads