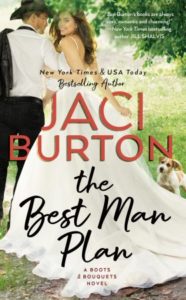 Three days before Erin Bellini’s wedding, her fiancé breaks up with her–in an email! Hurt and embarrassed, she decides to have a fling with veterinarian Jason Callum, who’s both the best man and the hottest guy she knows. But Jason wants a lot more than just a one-night stand with the woman he’s cared about for years. So he’s taking things slow. And hot. And showing Erin what real love can look like.

Suddenly Erin finds herself spending a lot more time with Jason than she intended.  Feelings she never planned on having again are wrapping around her heart, refusing to let go. Erin isn’t sure she can trust her instincts, though. After all, she made a terrible choice with her ex-fiancé. But Jason intends to convince her that he’s the best man for her, and that what they have together is a real love that will last forever. 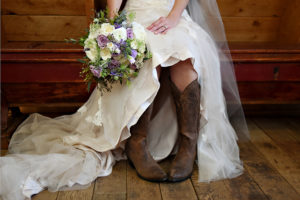 Erin Bellini shouted out from her office at Red Moss Vineyards.

“Mom. Have you talked to the caterers?”

Her mother didn’t respond right away. It was her most annoying quality. While she waited, Erin jotted down several things she needed to remind her bridesmaids about. Her two sisters were onsite so she had them covered, but she made a note in her planner for the rest of the bridesmaids.

Erin’s mother, Maureen, made an appearance in Erin’s office. “You don’t need to yell at me, Erin. You could have just sent me a text. And yes, caterers are confirmed. Which I already told you this morning.”

“Right. You did. For some reason I hadn’t checked it off the list. Sorry.” She typed an X in the spreadsheet on her laptop as well as marking it off on the page in her planner. She looked up at her mother. “And my dress is back from alterations, right?”

“It’s in your closet.” Her mom made that face, the one where her lips went straight and her eyes narrowed and you knew you were being scrutinized. “You’re not getting nervous, are you?”

Erin smiled and took in a deep breath to center herself. “I never get nervous. Because I have everything organized. In my planner. In my spreadsheet. In the notes on my phone.”

Her mother smiled. “Right. Yes, well that’s you, honey. I’m going out to the vineyards to check on your dad. Call if you need me.”

She should call Owen, her fiancé, to make sure he remembered he had to pick up the tuxes. Or maybe she should call Jason, Owen’s best friend and the best man. Owen was always scattered and busy and he’d likely forget. Thankfully he had her to organize everything for him.

She picked up her phone and found Jason, then pressed the call button.

She shook her head at Jason’s gruff brush-off. They’d grown up together, had known each other forever. “I need you to pick up the tuxes.”

“No. I mean tomorrow.” She heard mooing. “You delivering babies?”

“Oh. Cool.” Jason was a large animal vet, so he was always on the run. He was part of a practice in town, but he also worked the local ranches.

She was scrolling through her e-mails when she saw one from Owen. Huh. That was odd. Owen never e-mailed her. He either called or texted. She frowned and clicked on it.

“I thought Owen was doing the tux thing,” Jason said.

“Owen is likely up to his elbows in hops or wheat or whatever it is that brewers do. Or he’s making sure the brewery won’t go up in flames without him when we’re on our honeymoon. You know how he is.”

“Fine. I’ll handle it. Anything else?”

“Yeah.” She was trying to concentrate on Owen’s e-mail and forgot she was on the phone with Jason.

Her blood went cold. Everything in her went cold, despite the warm May day.

She read the e-mail again. It was a breakup e-mail. Two days before the wedding, and Owen was breaking up with her.

“In a freaking e-mail? He’s breaking up with me in an e-mail?”

She was getting married in two days. Correction. Apparently she was not getting married, because exactly two days before their wedding Owen had broken up with her. Via e-mail.

She felt dizzy and sick to her stomach. She leaned over and put her head between her legs.

“Did you know about this?” she asked, trying not to faint or throw up.

Erin straightened, the dizziness making her feel as if she’d just downed a bottle of Bellini’s best prosecco in one gulp.

Two days. They were getting married in two days. This had to be a mistake. But as she looked at the e-mail again, the word “mistake” was written in the same sentence as the words, “us getting married.”

“Ahhhhhhhhh!” she screamed, long and loud, then yelled, “That sonofabitch. I will kill him. He broke up with me in an e-mail, Jason.”

She straightened, shoving her laptop as if somehow that was the same thing as slapping Owen. “Oh, he did. And I’m sure. I can read a damn e-mail, Jason. I gotta go.” She ended the call and stared at her lists, tears pricking her eyes as the future she’d envisioned with Owen dissolved right in front of her.

All because of an e-mail. An e-mail! How could he be so cold?

She was breathing too fast and she knew it. She was going to hyperventilate if she didn’t calm down. She pushed herself out of her chair and forced herself to pace the floor of her office, centering her breathing, holding the tears back, resisting the urge to crumple on the floor and sob like a baby.

How could he do this to her? To them? They were perfect together.

Oh, no. She would not cry. Not over him.

Want to read the entire first chapter?
Then click HERE!