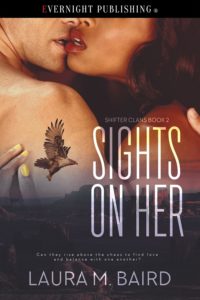 Hawk shifter, Brennon Underhill is on a mission to shut down rogue labs and take down those responsible for experimenting with humans and shifters. A startling connection ignites within him after one look at Mikki, the only survivor of horrific deeds, and he knows he’ll do anything to save her and make her his.

One moment Mikki Babineaux is celebrating with friends, the next she realizes she’s been kidnapped and put through torture. Her savior comes in the hulking form of a gorgeous stranger named Brennon who sparks decadent desires. But learning he’s a shifter, and she may now be one as well, throws her world into a tailspin.

Can they rise above the chaos to find love and balance with one another?

Brennon hooked the radio to his pants. He then raised his hand to the glass and flattened his palm to the window. The glass wasn’t any thin, two-pane panel that might be easily broken. It looked to be solid, nearly the same thickness as the door, at close to two inches. So what had caused the cracking? On the inside, no less. He looked to the woman with wonder, staring, beseeching her with his eyes to approach the glass again.

She looked at his hand, then his eyes, and took a hesitant step forward. Slowly, cautiously, she raised her hand but held it away from the glass.

“Come on, trust me,” Brennon whispered.

Her gaze locked with his as she pressed her palm to the window opposite his hand. When she made contact, Brennon could’ve sworn he felt her heat radiate through the thick barrier. And she must have felt something too because a tiny gasp escaped her mouth, causing the glass to fog with her breath. Her breathing increased, her chest moved rapidly, and her eyes dilated, becoming almost completely black from her wide pupils.

Brennon slung the rifle across his back while continuing to keep his sights on the woman. He began speaking in a normal tone. “I’m not here to harm you. I’m here to help.”

She blinked several times, a beautiful bright gold replacing the black as her eyes returned to normal. Her breathing remained a bit elevated, but at least she was breathing. And upright, as opposed to either passed out, drugged, or dead like the others.

“I want to open the door and get you out of there, but you’ve got to promise to remain with me. Can you do that?”

The woman nodded once as she quickly glanced to the doorknob then back to Brennon.

She smiled, showing brilliant white, straight teeth. “M-Mikki.” Her voice cracked, its low tone barely above a whisper as it was muffled by the obstacle between them.

She nodded several more times before attempting to speak again. “The door, locked.”

The raspy sound of her voice shouldn’t have sparked something inside Brennon, but it sure as hell did. Turning his concentration to the door, he did indeed find it locked. With nothing around to bang on the knob, and not wanting to damage the rifle any further, he figured he’d have to bust it open with his body.

“You’re gonna have to step back.” He spoke louder so she’d be sure to hear him. “Can you shield yourself with the mattress? I’m gonna have to bust the door.”

Mikki nodded and scrambled to the bed, easily lifting the pitiful mattress and holding it in front of her as she put herself in the corner.

Brennon lifted the rifle off and set it along with the radio on the floor beyond the door jamb. He backed against the opposite wall, giving himself about four feet of distance before launching his body at the door. It easily burst open from the force, banging against the wall. Brennon stopped it from swinging back at him, and when his hand slid around to the inside, he felt dents on the metal. As he started to look at what he was feeling, Mikki threw down her shield and began running toward him. He had just enough time to react as she jumped into his arms. Her body shook as he easily caught her petite form and held her close. Even with the smell of dirt and sweat coating the gown and her skin, he detected an underlying scent of something sweetly musky. A heady combination. 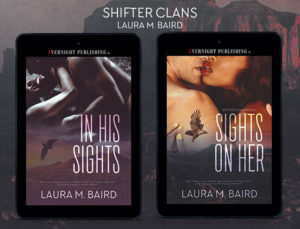 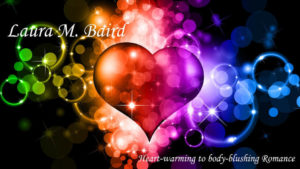 As one who grew up with a love of reading, I’ve turned that into a love of writing.  And one day (soon) I hope to make that my full-time endeavor.  I continue to practice dental hygiene – a career I’ve enjoyed for nineteen years.

I’ve been married over twenty-eight years to my stud of a husband, and had the pleasure of raising two sons who make us proud. Recently, we’ve joined the ranks of grandparents, with the addition of a precious grandson.

Growing up on the East Coast in Florida, and after meeting my husband in Georgia while we both served in the U. S. Army, we call the West our home.  After living in Idaho for many years, where hubby is from, Washington State is where we now reside.  Traveling is a dream for us, as we have passports just waiting for stamps from Canada, Scotland, New Zealand, and Fiji!

Besides reading and writing, I enjoy music and movies, art and tattoos [both admiring as well as personally getting], staying active, watching football [NFL and Boise State], dark chocolate, and stalking my favorite authors on social media…. authors such as Donna Grant, Rachel Grant, Toni Anderson, Anna Durand, and so many more. You can see what I’m reading and recommending at Goodreads and BookBub.

I write what I also enjoy reading; stories that range from heart-warming to body-blushing, filled with emotion, suspense, humor, and contemporary issues.

To be in the “know” about all the latest, click over to my contact page and follow me on my social media sites.  I love engaging, so join me for the fun and memorable moments on this journey!