Soul of the Wolf: The Novels of Ravenwood, Book Two by Judith Sterling (Book Showcase) 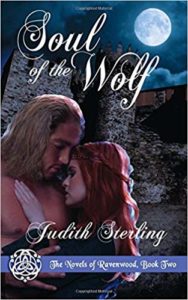 A Norman loyalist, Lady Jocelyn bristles when ordered to marry Wulfstan, a Saxon sorcerer. She nurses a painful secret and would rather bathe in a cesspit than be pawed by such a man…until her lifelong dream of motherhood rears its head.

A man of magic and mystery, Wulfstan has no time for wedded bliss. He fears that consummating their marriage will bind their souls and wrench his focus from the ancient riddle his dying mother begged him to solve. He’s a lone wolf, salving old wounds with endless work. But Jocelyn stirs him as no woman ever has.

Their attraction is undeniable. Their fates are intertwined. Together, they must face their demons and bring light to a troubled land. 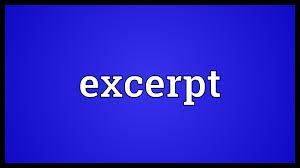 Wulfstan’s expression shifted faster than the midnight clouds. “Why are you here?” he asked in a low, tight voice.

Keeping her distance, Jocelyn eyed the wolf behind him and willed her voice to sound calm. “Why do you think?”

Wulfstan’s eyes were like ice. “I think…that you’re spying on me.”

She held his wintry gaze. “Then you think rightly.”

“What? No denial? No protestations of innocence?”

“Would you have me lie?”

He clenched his fists. “No.”

“Nor would I have you pound your pestle into my private affairs.”

Heat swept through her. “Pray, what affairs have you that are not private?”

“I’ve given you a free hand with the servants and the keep. What more do you want?”

The wolf turned away and padded toward the forest. Her courage doubled. “More.”

Her mind made up, she strode past Wulfstan and approached Woden’s Stair. She raised her foot above the first step.

“Stay!” he shouted above the wind.

She stopped short and turned to him. “Are you addressing me?”

He tore his gaze from the forest and settled it on her. “No. The wolf.” With powerful strides, he bridged the gap between them.

Her stomach quivered. He stood but a foot away. “Good,” she croaked. Then she cleared her throat. “For a moment, I thought you ordered me to stay, as you would order a dog.”

Humor softened his features. “Now there’s an idea. I must say, it does have a certain appeal.”

“A dog can be trained to please its master, but the master also enjoys pleasing the dog. Some hounds are spoiled, in fact.”

She frowned. Something in his tone was…suggestive. “Were I a bitch, I would not be so easily managed.”

He grinned. “That I believe. And I know you’re no animal to be trained. You’re a strong woman with a mind of your own. But even the strong-willed like to be pampered. Wouldn’t you like it?”

She stepped backward, and the heel of her boot met stone. Flustered, she clambered onto the step.

Wulfstan’s demeanor darkened. “Get down from there.” His large hands invaded her mantle and encircled her waist.

She wriggled free of his hands and backed onto the second step.

He crossed his arms. “Didn’t you hear me? Come down. That’s an order.”

Her body heat flared anew, and she climbed three steps higher. “I heard you, but I’ll not play the bitch to any man.”

His words, exactly measured, were a promise. “I would stop you.”

“You could try.” She whirled around and started upward.

He grabbed her from behind and hoisted her several inches off the stairs. She struggled and kicked, and her left foot connected with his flesh.

“Woden’s blood!” He hauled her away from the stairs and planted her on the ground.

She twisted in his arms to face him. “Your nerve is unparalleled.”

His face was mere inches from hers. “Trust me, it bows to yours.”

“You’ve a clever tongue, my lord.” The hard, hot length of his body pressed against her.

His eyes were now dark and inviting. Expectant. “Would you care to see how clever?”

The Novels of Ravenwood, Book One 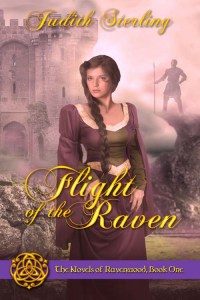 The Novels of Ravenwood Book 3 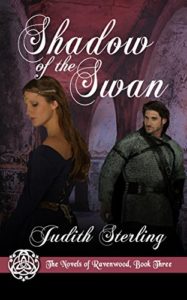 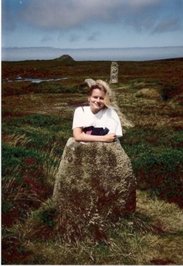 Judith Sterling’s love of history and passion for the paranormal infuse everything she writes. Flight of the Raven, Soul of the Wolf, and Shadow of the Swan are part of her medieval romance series, The Novels of Ravenwood. The Cauldron Stirred is the first book in her young adult paranormal series, Guardians of Erin.  Written under Judith Marshall, her nonfiction books—My Conversations with Angels and Past Lives, Present Stories—have been translated into multiple languages. She has an MA in linguistics and a BA in history, with a minor in British Studies. Born in that sauna called Florida, she craved cooler climes, and once the travel bug bit, she lived in England, Scotland, Sweden, Wisconsin, Virginia, and on the island of Nantucket. She currently lives in Salem, Massachusetts with her husband and their identical twin sons.

2 Responses to Soul of the Wolf: The Novels of Ravenwood, Book Two by Judith Sterling (Book Showcase)