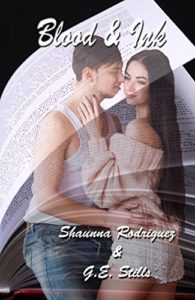 What’s worse than being rival authors for competing Publishers? Neighbors that’s what. Leave it to Samantha, Olivia Dixon’s publisher, to find a writer to collaborate with on a new book. Olivia’s thrilled with the idea until she learns the brilliant writer is Gabe Anderson, her detestable neighbor. After a rocky first meeting, the two writers spend several months developing their new book. Working side by side, seven days a week, their relationship evolves into something that transcends normal professionalism. To determine whether this partnership is sweet and clean or down and dirty, they take a break and go camping together. When they return from camping, Olivia still feels uncertain of their relationship. Gabe receives a call from his publisher, Irene. He and Olivia have been invited to a conference in Cancun, Mexico. After check-in they discover, to their consternation, that both their publishers are attending the conference as well. A well-known author’s estranged husband is murdered leaving her as prime suspect, until she ends up in the morgue by his side. Olivia specializes in writing murder mysteries and the temptation to solve one in real life is irresistible. Because of her relationship with Gabe, he becomes involved as well. Can Gabe and Olivia find answers quickly and solve the crime while clearing their friends of suspicion, or will more body bags be needed?

And the killings begin.

The doors opened onto an eerily silent floor. It was my floor, but it felt different for some reason. It could be my imagination, I thought, as I stepped out of the elevator and ran to Madeline’s door which was slightly ajar. I frowned and pushed it open with the toe of my black heel and leaned back, listening to the creak of the hinges. My stomach flip-flopped and my heart rate quickened as I stepped into the suite illuminated by a single dim light. The sheers and the cream colored, solid curtain behind them were pulled closed, shutting out the moonlight.

I couldn’t help wondering if that’d make it less or more creepier than it already was. I reached down and slipped my shoes off and dropped them quietly by the door. Next, I glanced left and right, hoping to see Gabe but thus far, there were no signs of him. I walked down three marble steps that opened into the living area and stood in the center of the floor. Looking down at the rug, I did a double-take at the shattered glass that once made up the top of a beautiful coffee table. I studied the blood that colored most of the pieces then screamed bloody murder when arms wrapped around me. I threw my elbow back and caught air just as Gabe spun me around and pinned my arms to my side. He twisted slightly and drew his knee up to block the blow he knew was coming, then yanked me forward before I was the next victim in the glass.

“Baby! Its-it’s me!” Gabe practically yelled over my screaming. He shook my shoulders gently then wrapped his arms around me.

“I said wait downstairs so why are you here?” he asked then leaned me back, shook his head and pulled me to him again.

I had several things I could say, yet, none of them came out. I’m not sure if my screams summoned the police, but the suite door banged the wall and heavy, booted feet could be heard running in. I was positive I heard guns being drawn. Gabe cupped my face in his hands then leaned his forehead against mine and closed his eyes leaving me with the impression he was going to kiss me then disappointing me when he didn’t. Knowing Gabe, this wasn’t a situation that constituted kissing.

“You make me so damn insane, Olivia. What if it hadn’t been me? What if there was a killer still in here? What if they came back for Madeline, because she got away? What if something happened to you?” he scolded. While Gabe held me against him, my mind procced his multitude of what ifs.

An officer was standing beside us now, listening to Gabe fussing at me. He had already holstered his weapon, deducing we were clearly not a threat nor killers. “Do you have any idea what happened here?” the man asked Gabe.

Gabe looked at me then back at the officer. “No,” Gabe said. The officer left to check the rest of the room.

“But I can speculate,” he mumbled for my ears alone.

I sighed knowing what that meant. “We’re writers, Gabe. We’ve written scenes far more in depth than this,” I informed him hotly.

“That’s fiction, Olivia. This is a sick and twisted reality, more so than the far regions of my mind. I don’t want you involved. I don’t want us involved and that’s why I told the officer I had no idea,” Gabe told me pointedly.

“Tough, I’m involved,” I informed him, not backing down.

“Not open for discussion,” Gabe scowled at me.

Another officer had joined us and chuckled as he listened to us going back and forth.

“You’d think that,” we both told him.

“You mean you’re not?” he asked in disbelief.

“All but. We’re dating…exclusively,” Gabe informed him then held my elbow and led me away from the coffee table, AKA, crime scene.

“Stop, Gabe. Stop. I can help,” I protested as he guided me up the three marble steps and to the front door.

“No, you can’t help. I don’t want you involved in this,” he informed me then kissed me and handed me the room key.

“What are you doing?” I demanded.

“I’m going to do a walk through with them since I was the first one here. You go to the room. Take some deep breaths, run a hot bath and I’ll be there in just a minute, baby. I promise. I’ll order room service, we’ll spend the rest of the evening in bed.”

I sighed and rolled my eyes. “Bribery will get you everywhere with me,” I told him.

He wrapped his arms around me and stepped closer. “Would it get me even closer if I told you how in love with you I am?” He kissed my neck and my jaw up to my lips. “I just want my baby to be safe? It’s not that I doubt your mad sleuthing skills. I’ve seen your writing, as we write together but, again, reality, love.” He kissed me then released me and stepped back closing the suite door and shutting me out.

I grumbled and stomped down the hallway and was almost to my suite when I heard what sounded like a crash coming from the elevator. I jumped and spun around then made a mad dash to the doors that opened on their own. I wasn’t sure what freaked me out more. The doors that opened on their own or the large, maroon suitcase in front of me that was leaking a massive amount of blood on the creamy white floor. Curiosity got the best of me. I stepped into the elevator, pushed the ceiling tile that had come down with the bag off, knelt and unzipped it. My hands flew to my mouth as I toppled backward out of the elevator and screamed Gabe’s name at the top of my lungs. I was crying and nearly inconsolable by the time he reached me along with seven armed officers. He turned my face into his shoulder and rubbed my back cursing under his breath the entire time. 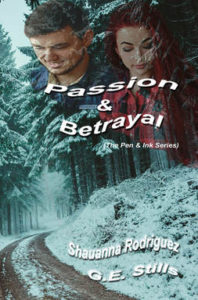 Gabe accepts an invitation from his old college roommate Mike after he calls and offers them a week at his Denver cabin. They were in need of a vacation from their heart-pounding getaway to Cancun Mexico where they barely survived after a fellow author and her estranged husband were found murdered at a writers convention. Who could resist a rustic cabin secluded from the world by the thick, ominously quiet woods of Colorado, where even the sound of footfalls would be silent? Like the swirling snowflakes, romantic bliss and their limbs entwined on a bearskin rug sprawled in front of a roaring fire awaits them, so does murder and mayhem which seems to follow Gabe and Olivia everywhere they go. A snowstorm rages while a killer stalks the cabins and the people in them. Can the two writers who just wanted an escape from reality put the pieces together before anyone else dies or goes missing?