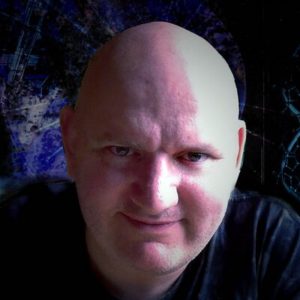 (David) Anyone who knows me will tell you I’m a very natural “story-teller” (to put it politely!) and so it was always there inside me. The push to actually start writing came when I was faced with an extremely long train commute. I wanted something to fill the time and thought I’d give my long-held dream a go. To my surprise I ended up writing a novel. It wasn’t a very good one and it’s never been published, but nevertheless I was hooked and have been writing ever since.

(David) My slumps tend to be more emotional than creative, so when they arrive I try to do things to break me out of that mind-set, such as go for walks, get a change of scenery etc. I don’t think I’ve ever really faced writer’s block as such. Usually my head is so full of ideas it’s difficult to get them down. Also if a piece of writing starts to not flow, I don’t worry about it too much and will carry on, knowing I can always revise it later. Or sometimes I’ll switch to a different project for a while.

(David) I really have no idea what a romance writer’s life is like  🙂 For me, when I’m not writing I like to catch up with science news, hike and swim and drive around in my own personal starship–a vintage Corvette ZR-1. 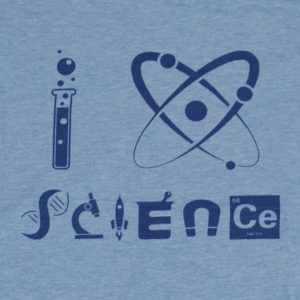 (David) Family and friends have been incredibly supportive of my writing, although I think my Mum is still waiting for me to get a “proper job” again  🙂  As I write mostly science fiction, I’m also not sure quite what she thinks of some of the more bizarre aspects of my writing!

(David) I started reading very early and very heavily – it was almost an addiction. As a result I’ve read so much that it’s hard to pin down individuals. That said, I loved the works of Robert Heinlein and Isaac Asimov and read as much of theirs as I could get my hands on and although their styles are very different, I still appreciate them to this day. I’ve also read a lot of Rudyard Kipling and was hooked on Conan Doyle’s Holmes stories very early on. For present day authors, I’d recommend Christina McMullen who writes classy SF with a touch of humor, some of it slanted more towards a YA audience. Other new authors that are turning out good stories are Jay Norry, who has written a large collection of zombie books, and also fantasy authors Richard H, Stephens and C.L Schneider. Beyond that I like to read histories, especially about scientific figures and also the work of science popularizers such as Brian Greene.

(David) I could perhaps see a mid-career Bruce Willis as Joe Ballen in , with Lauren Bacall as Dollie because of that voice and the brash confidence. There would have to be some major digital re-creation going on there though  🙂 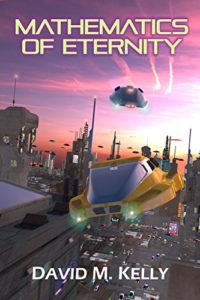 Meet former space engineer, Joe Ballen. These days, he’s scraping a living flying cabs in flooded-out Baltimore, trying to avoid the clutches of his boss and the well-meaning advice of an old friend. When one of his passengers suffers a grisly death, Joe is dragged into a dangerous web of ruthless academic rivalry centered on a prototype spaceship.

As the bodies pile up, Joe becomes suspect number one, and his enemies will stop at nothing to hide the truth. With the help of an enigmatic scientist, a senile survivalist, and the glamorous Ms Buntin, can Joe untangle the conspiracy and prove his innocence before it’s too late?

Mathematics Of Eternity: the first in an explosive SF thriller series by a fantastic new Canadian author.

The future’s about to get a lot more action-packed!

(David) Right now, I’m working on edits for Perimeter, book 2 of the Mathematics Of Eternity series. This one is largely set in space and has more of a darker, mystery feel than book 1, but it’s still a fast-paced thriller with great characters and plenty of acerbic humor. I’m also writing the first draft of book 3 and working on a number of side projects as time allows.

(David) The best place to find my books is via my Amazon Author Page Link. You can read my short stories in any order. My upcoming book, Perimeter, which is the second in the Mathematics Of Eternity series, could be read as a standalone, but obviously I hope you’ll read book one first  🙂

I’m also on social media. Here are all the links!

(David) People often think of science fiction as being something only accessible to “geeks.” I try to make my writing so it can be read by anyone and have had several people who’ve said things along the lines of “I don’t usually enjoy science fiction, but I really enjoyed this book.” This is very encouraging to me and I hope to carry on making my books good reads for a wider audience.

If you love the science fiction genre, then stick around because I’m going to show you a few more books from the creative mind of David M. Kelly! 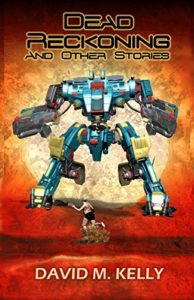 Looking for SF that’s intelligent, action-packed, and humorous? This collection of ten short stories features a cast of characters all in need of some serious therapy.

Hector discovers life after death ain’t easy when your shorts itch and your ass belongs to a whip-wielding giant.

And Murphy’s fighting to keep the peace as his team of geeky scientists and a gung-ho lieutenant investigate a mysterious alien ship—all while dealing with his own case of Murphy’s Law.

First Contact is always complicated, especially when you have to call in cranky old relic, Casteneda, to bail you out.

Fresh off the battlefield, Matt Holbrook is also grappling with a perplexing new species, but all he wants is to make it home.

And Earl Duarte is in for some interesting pet therapy in How Much Is That Doggy? Discover Dead Reckoning And Other Stories. SF with attitude!

Dead Reckoning
How Much Is That Doggy?
Dust To Dust
Murphy’s Law
Reboot
Version Control
A Slight Imperfection
First Contact
He Who Controls
One For The Money. How far would you go to protect your career? Your friends? Your family? Your way of life?
The Atolls–a group of elite off-world colonists—dominate from their position orbiting the Earth, restricting access to scroffers—their name for the people still living on the planet. Shuttle pilot Guy Addison is one of the few allowed to make regular trips to the Atolls and feels little sympathy for his Earth-bound contemporaries.

But after the Atolls announce a draconian clampdown on immigration, Addison faces the very real possibility that flights will be stopped and he will never be allowed into space again. And when terrorists take over his shuttle, he must confront not only secrets from his past but also the deadly consequences of a new future. Can he successfully outwit both the terrorists, and the Atolls, to bring his ship home?

Atoll: An edge-of-the-seat suspense-filled thriller with action on every page! 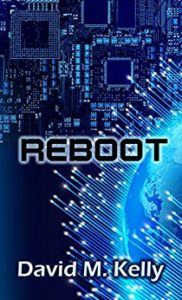 Commissioner Bellarbi’s administration of the Information Systems Investigation Authority isn’t going well. Communications networks are crumbling and a series of high-profile industrial and food production failures have threatened safety and cost jobs. He believes the global technology infrastructure is under attack from cyber-terrorists. With public protests rising and his job under threat, he needs answers fast. Leaving him only one choice: to seek help from her…

Mayrum Casteneda, the legendary founder of the Authority, is a relic from a bygone age who definitely doesn’t suffer fools. She might just be the only person who can help, but are the answers buried too deep?