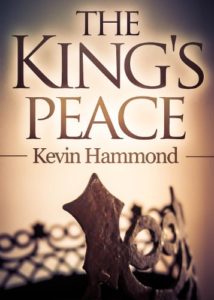 The Kingdom is young and yet it stands in great peril. Dark tales of the unnatural have reached the King’s city. The King is slain in his bed and the storm on the horizon brings black ships closer to the coastal city of Erenon. Nathaniel, a clever thief has stumbled upon a job that brings him to the home of the King when he is slain and Nathaniel is unwillingly dragged into the quest to reach the southern garrison which has gone quiet in recent months. Strange powers are helping and hindering him and the small company of soldiers dispatched to that garrison as war comes to the city.

They will find those horrors that plague the common man, an ancient legend will unravel, and a deception so epic in scale it involves the Gods. The whole world of man and nations who live on the other side of the mountain range known as the Great Divide will come together in a war no one really understands and as the kingdom fights to survive it will face an enemy they know nothing about.

Between the two men, one of the serving girls had placed a candle and Nathaniel watched for long minutes in silence. The flame shone so bright in the dim corner of the room where they sat. The Duke sipped a cool glass of water and the men milled around the room trying to get the place cleaned up for the morning when the locals would come by expecting food and drink. He had no idea that the Duke would allow him to sit for as long as he needed before giving his answer, nor did he know how much time had passed. He extended his hearing around the room to isolate the many conversations and hushed whispers among the people in the room. Two men near the door spoke of the genius plan to install archers on the balcony of a brothel across the road. Another man was offering a silent prayer to whichever God he favored. He asked that his wife and young daughter be well cared for in his absence, but he spared little thought for himself, and Nathaniel approved of the man’s selflessness and care for his family. He wondered if he might ever live long enough to have what this man ached to be away from. Hector, on the other hand, cursed the King’s men quietly while scrubbing some unseen mess made in the kitchen by the soldiers battling with the fake guildsmen who had managed to flee that way.

The Duke was sitting quietly staring off into space as the young thief peered at the candle. His mind and his senses were away somewhere else and he could not have named that moment when the flame of the candle had turned black. He sat for long moments staring at the ominous, dark motion of that snaking flame, but as his mind was elsewhere he did not call any alarm or draw attention to it. And Nathaniel continued to stare at that dark flame until the creeping itch travelled up his spine and a terrible alarm pounded in the back of his head. Slowly, in a voice filled with a terror he had never before experienced, he managed to grind out the words “Something is terribly wrong.”

With his senses extended still, around the room, he heard the conversations fall mute. Hector stopped cursing the mess and the soldiers had stopped cleaning. One man silently crossed himself, and many instinctively reached for their weapons. The storm had picked up in earnest and the darkness outside was complete. Inside the room something had filled the air. It was an ecstatic tension buzzing between the people like something travelling around, under the tables, men jumped as they felt something brush past their feet.

He heard the rolling hiss of something swirling around the room. There was no point of issue and it was charging the air with energy. Nathaniel thought he could almost see something turning around in the shadows of the room, in the corners of the building, travelling around the ceiling.

And the scream, so filled with helpless terror, was cut short with a gargling cry and a vile hissing as blood coursed from the soldier’s neck; behind him stood one of the false guildsmen. His body had been hacked to shreds by the soldiers and it was so impossible that he could live yet he had torn the throat from a live man. The monster’s stumbling gait was its only betrayal of the deep injuries inflicted from the passage of his death. There was a cruel glimmer that Nathaniel thought might have been pleasure within the coal black shades of his eyes as he crammed some of the dead soldier’s flesh into his mouth.

Most of the men in the room were frozen in mute horror at what they were seeing, their eyes recorded it but their minds couldn’t process it. The dead were rising, for vengeance, for wrath, for whatever dark intent fuelled their desire. The weapons were held in shaking hands by ashen white faces but no one made the move to attack. The reality of it, the cruelty of it, had not dawned on the soldiers fully until they saw their own comrade- freshly killed- beginning to stir on the floor. As his coal black eyes fixed on the living, some of the younger soldiers expelled the contents of their stomachs.

Amid rasping, unintelligible threats and flailing limbs, the walking dead ambled forward, and the soldiers slowly moved backward-inch by painful inch. From the kitchen they could hear Hector and the serving girls fending off the creatures come back to life, until they burst through the door with panic strewn on their faces.

“Barricade that door!” The Duke screamed, and the soldiers came to life with the practiced obedience of listening to his authority. Two men broke ranks to help the girls shove tables before the kitchen door and held it in place while the pummeling assault came from the other side. The creatures vented a deep throated rage as they tried to smash their way through.

Nathaniel loosed a throwing dagger with a strong throw and the knife struck a guildsman square in the chest. It would have been a mortal blow for a living man but the creature barely even flinched.

“Fall back, hold the line, press them away with your swords.” Jorge barked orders at his men. The soldiers gave up ground slowly while the creatures came on. A few men dared hacking blows that severed limbs but the dead pressed further on, until the living had given up fully half of the bar room.

Dashing behind the soldiers, Nathaniel reached for a broken table leg, wrapping it in some table cloths and poked the brand into the flames of Hector’s hearth. The rags quickly caught fire and he returned to the line to throw amid the dead men. The brand caught fire on one guildsman’s leg but the creature stumbled forward with one arm and a leg partially alight, still questing after the flesh of the living. “Don’t lose your heads, hold your line and strike for their limbs,” Jorge ordered his men.

“Gods save us,” McKeen uttered a loud curse as he returned to the bar. Some of the undead turned to face him but the burly Sergeant did not turn and run as expected. Nathaniel watched in awe as he locked the door behind him. “Can’t have you fellas roving about my good city now can we? Wouldn’t be good and proper for the fancy folks to see your like parading about chewing up their nice outfits, no we can’t have that.” The Sergeant pulled his sword and roared like a man possessed as the first of the guildsmen drew near. His long blade sliced in a powerful arc to sever the thing’s head from its shoulders and the body crumpled in a heap on the floor. The body lay still as the head rolled around the floor, still gargling and hissing.

“Set to, gentlemen, the Duke gave the quiet command and the men pressed on the counter to hack and slash at the heads of the undead. Nathaniel saw little use for himself in the fight but he mustered the courage to pick up a fallen man’s sword and help to press the unliving backward so the soldiers could do their job.

“Ware the limbs!” Jorge warned, as he ducked an arm to drive his sword upwards through a dead man’s neck. With a savage twist he pried the head clean off the shoulders. While the undead snatched and grasped for any contact with human flesh, the soldiers worked in pairs to parry their limbs while his partner placed the killing stroke to take the head clean from the shoulders. The fray took little time to come to an end and, though the men looked sick with fear, they knew it was a miracle that only one man had died. The resistance in the kitchen was brief compared to the main assault that took place within the bar room with only a few of the undead left to be dispatched.

A blood spattered Duke stood to the left flank of the melee in the midst of a small gathering of headless men “Sergeant McKeen? Are you still alive, sir?”

“Mind telling me how you came upon inspiration to save the day then, Sergeant?”

“Gods save us, sir. I hail from the small island of Forfar on the Southern Reaches, beyond the widow’s peak, sir. The people have been around from before the Kingdom and they say there was a village overrun in our history. They say one night when a dark storm brewed that the dead folks long since passed had come back to tear at the living. They say, sir, that they craved the taste of living flesh, and ought to blame us for their passing as we are alive and they had already gone to their maker. That the body is dead and the mind possessed by some dark magic, they say the only way to kill them was to sever the head from the body. It’s bloody butchery, if you don’t mind me saying, sir. But now we best tend to the corpses and the severed heads. If legend be true then the heads will never die until the spell is ended. But we are best to burn all that’s left of them so they might never find way to rise again.” 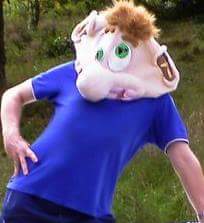 I always thought there was something very iconic about falling down a really big hole. Until that happens I’ll just write some stuff.