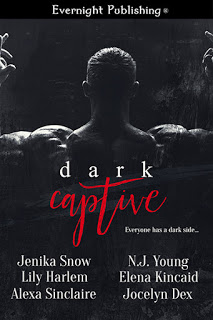 Everyone has a dark side…

Kidnapping, abduction, and sexual slavery are just a few of the titillating taboo themes in this hand-picked anthology. 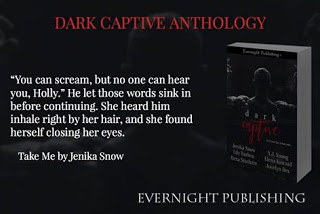 TAKE ME BY JENIKA SNOW
He’s watched her, stalked her, and makes no apologies about what he’ll do to make her his. But how far will he have to go to make her see she belongs with him?

After her mother passes away, Holly decides to finally have a life away from her abusive father and the darkened, lifeless world she lives in. But someone has been watching her, waiting for the right moment to take her away. It’s when she comes face-to-face with her captor that she realizes he won’t let her go.

Will Holly stay with a man that decrees she’s his, that he’ll do whatever it takes to make her see they belong together? Despite the twisted and dark nature of it all, she feels freedom for the first time in her life. Will she give in, or will she accept what he offers her … her life back? 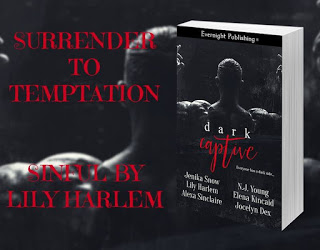 SINFUL BY LILY HARLEM
A London riot, a lost girl, and a priest with a secret. Will the Devil’s whispered suggestions tempt them to indulge in the sins of the flesh?
Blurb

London is aflame with riots. Confusion and danger lurk around every corner. For Cheryl, caught alone and terrified in a dark alley, she fears she’s about to meet her maker.

Luckily the safe sanctuary of a small church, nestled between the deserted shops and houses, affords her protection. And within these sacred walls she finds Father Steve—a man whose decision to be celibate, marry his faith, seems to her an awful waste to the females of the world.

But all is not as it seems and as her hot and holy new friend reveals his layers and confesses his sins, the temperature in the church heats up more than the flames raging across the city.

Safety, however, is an illusion, and the pair must fight to survive. In doing so will fate draw them together? Have the heavens mapped out their destiny? And was Father Steve telling the truth about his virginity? 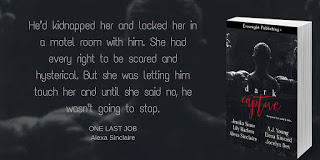 ONE LAST JOB BY ALEXA SINCLAIRE
One last heist and then he’ll be free. But can he still keep the woman he loves when he forces her to sacrifice her freedom?
Blurb

After a decade of crime, Lawson Trent is done risking his freedom and having nothing real to show for it. But in order to walk away, he needs to do one last job. Except this time there’s a catch: Ivy Stuart. He knows he can’t have her, he knows it’s too risky but he can’t help himself. When she gets got up in the heist, he has to make a choice and risk her life and love.

If growing up in foster care taught Ivy anything, it’s not to let anyone get too close. Working at a jewelry shop, she’s finally building her own life, albeit a solitary one. When she meets Lawson, the new security guard, she can’t ignore the draw she has to him. But when she finds out who he really is, will she be able to look past the lies and forgive the man she fell for? More importantly, if she can’t, will he let her go? 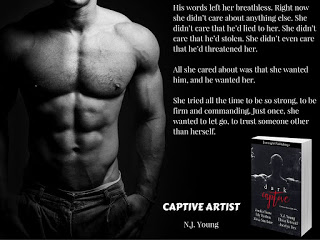 CAPTIVE ARTIST BY N.J. YOUNG
A troubled thief. An art heist gone wrong. A woman caught in the middle. Can she protect her heart from the man who threatens her life?
Blurb

Carrie Wentworth never expected to be at the center of a high-stakes art theft. She’s perfectly happy to run her prestigious art gallery in a small mountain community and ogle the super hot janitor, Ellis “Jax” Jackson.

But Jax is more than tall, dark, and bulging muscles. He has an art heist to complete no matter what the cost. When Carrie catches him in the act, he can’t bring himself to kill the pretty blonde. So instead, he takes her captive. But he will have to figure out what’s more important—money or his feelings for Carrie. 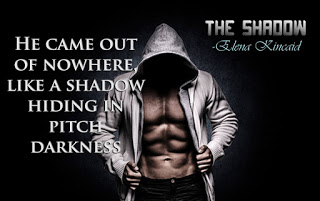 THE SHADOW BY ELENA KINCAID
He came out of nowhere, like a shadow hiding in pitch darkness. Could he uncover the whole truth before he sentences her to a fate worse than death?
Blurb

He came out of nowhere, like a shadow hiding in pitch darkness and turned Emily’s world upside down. Was she a victim of circumstance or part of a more sinister plan? After fighting, begging, and even praying for her freedom fails, she is given a choice … succumb to her Shadow’s commands or die. What Emily did not expect, was her unexplainable desire for her captor.

Brody Beckett thirsts for revenge. He wants those who wronged him to suffer, to bleed, and he’ll stop at nothing to achieve his goals. The last thing he needs is to go all soft on the beautiful woman who stars in each and every one of his nightmares. When doubt and suspicion seep in, Brody wonders if he could uncover the whole truth before he sentences Emily to a fate worse than death. 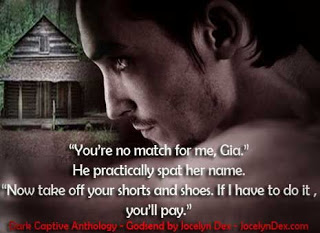 GODSEND BY JOCELYN DEX
Her captor’s threats and sexual aggression make her wonder if she’ll escape unscathed … or at all.
Blurb

Gia’s hike turns into a nightmare when she’s caught breaking and entering. Even though her captor is the most drool-worthy man she’s ever seen, his constant threats and sexual aggression make her wonder if she’ll escape unscathed … or at all.

Bane should get Gia out of his sight before he loses control and becomes more of a bastard than he already is. But he wants nothing more than to lose himself inside her and wash away the painful memories of his past.