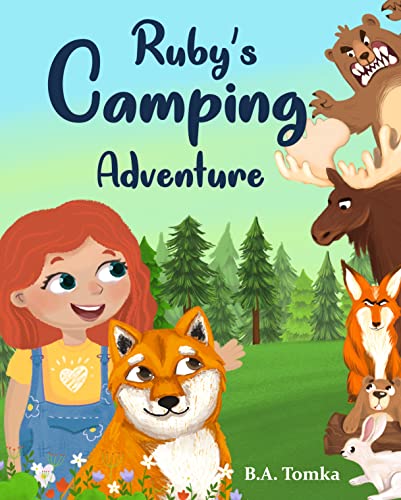 Roasting marshmallows was the plan, until a rabbit hops by…

Ruby is a cute, cuddly Shiba Inu with a mind of her own and a knack for trouble. When Ruby gets lost in the forest on a camping trip with her best friend, Anna, she comes face-to-face with several forest animals who don’t welcome the fox-like dog. Through the darkness, Ruby searches for a kind friend who will see the little pup for who she really is.

Ruby’s Camping Adventure is a charming children’s book for young readers (ages 3 – 6) that will keep kids in suspense, while delivering a subtle message that stereotypes are hurtful. 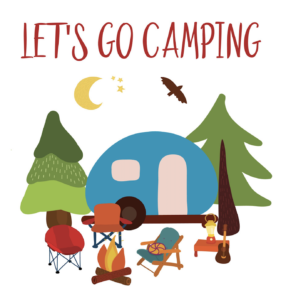 Oh my goodness gracious, what an adorable book. The illustrations of Ruby and Shiba Inu were cute but not as cute as the real-life photos of the two. What an adorable duo!

Natia Gogiashvili did a fantastic job illustrating all of Shiba Inu’s expressions. Without reading the text, you knew precisely what the dog was feeling. If you have a child who has difficulty reading emotional cues, these images would be a marvelous therapeutic tool.

Shiba Inu is like most dogs; they love to chase things! Shiba Inu couldn’t resist chasing after a bunny in the forest, which led readers to meet some wildlife characters. For those teaching children the names of animals, several woodland creatures are featured in Ruby’s Camping Adventure.

I do not have dogs, but I thought it was comical it preferred bacon and popcorn over freshly caught fish. I don’t blame the pooch; popcorn is delicious. Bacon, eh. It’s still better than unbreaded fish, though.

If you have an early reader in your home, Ruby’s Camping Adventure would be an excellent book for your child to practice their reading skills with. There are a couple of tricky words, but it’s not a complex story to read. Most words are common except for boreal. That one might need explaining. I suggest showing them pictures of the northern lights. They are quite beautiful!

I loved the B.A. Tomka included a pronunciation key for Shiba Inu because it would be a word that might trip up some early readers. I also liked how they defined Shiba Inu as well. According to the author, it’s a breed of hunting dog from Japan.

Amazon’s recommended reading age is 3 – 6 years. Depending on your child’s reading level, even second graders could use Ruby’s Camping Adventure to sharpen their solo reading skills.

I look forward to reading more works by B.A. Tomka. 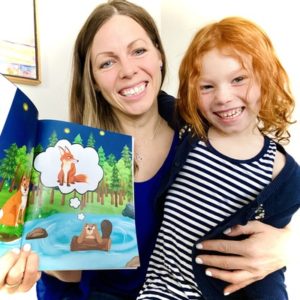 Mother-daughter writing team Bonnie and Anna Tomka — B.A. Tomka — live in northern Saskatchewan, Canada, with their Shiba Inu, Ruby, and two humans, Michael and Austin. The family shares a love of popcorn, bacon, and a good story. Their first book kicks off the Shiba of the North book series.