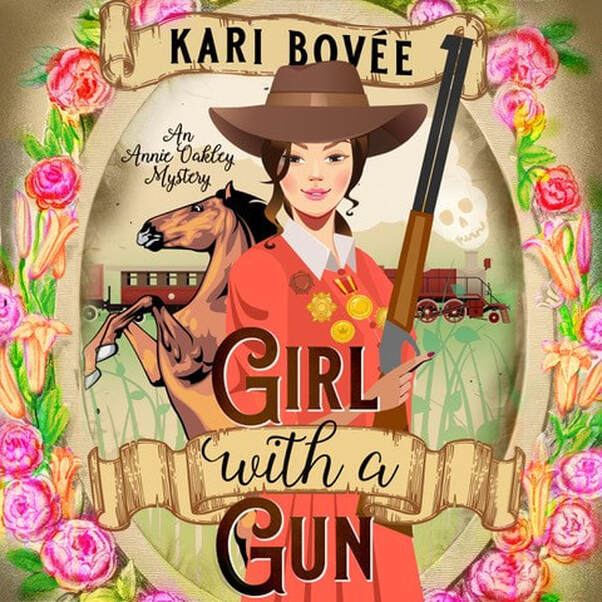 She’s on the rise to fame and fortune, but her sudden notoriety comes with some deadly consequences.

Annie Oakley thrives as a sharpshooter in the Wild West Show. Finally, she has a chance to save her family’s farm—and make her dreams come true.

But her act misfires when she discovers her Indian assistant dead in her tent. Uncovering a shocking secret from her assistant’s past, the girl with the gun believes it’s murder. Determined to find the truth, she ruffles some horse feathers, making enemies along the trail.

​But, when her prized gelding is stolen, Annie realizes she might have been the target all along.

Can Little Miss Sure Shot save her equine friend and find the killer before everything she’s worked for is destroyed?

​If you like a cunning mystery, a feisty heroine, and a fast-paced plot that keeps the pages turning, you’ll love this wild ride with the iconic Annie Oakley in the saddle. 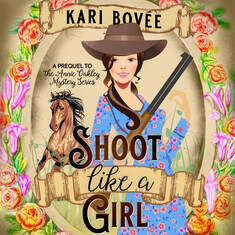 She would do anything for her loved ones, even if it meant she’d be lost to them forever.

Young Annie Oakley never expected to be saddled with responsibility so soon. Following her father’s sudden death, the spirited girl finds herself shipped to a nearby county working for a couple promising a good wage. But when she discovers they are not what they seem, Annie suddenly fears her life may be in peril.

Determined to help her mother and siblings, she endures the hardships and mistreatment from the couple. But when that cruelty is targeted at the beautiful Buckskin horse who is her only friend, Annie decides to take matters into her own hands.

Will the spunky teen return to her loved ones, or will her decision land her in jail?

​Shoot like a Girl is the prequel novella to the Annie Oakley mystery series. If you like a fiercely loyal heroine who won’t be anyone’s victim, then you’ll love Kari Bovée’s thrilling story of America’s best-loved sharpshooting sensation. 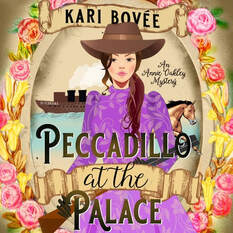 She’s outgunned her opponents at every turn, but will it be enough to solve a royal case of murder? Annie Oakley can’t believe her good fortune at an imperial invitation.

Queen Victoria wants Buffalo Bill’s Wild West Show to perform for her Golden Jubilee. But during the voyage to England, a royal escort is murdered and the gun-slinging star finds herself at the center of an assassination plot against the crown.

Determined to catch the killer, Annie tracks down the clues. And by the time they reach London, she thinks she’s right on course. But when her husband falls mysteriously ill, and an assassination attempt is made on the queen, the sharpshooting amateur sleuth may find herself out to sea before her ship comes in.

Can the clever markswoman solve the double-barreled mystery before it’s too late?

Peccadillo at the Palace is the second novel in the Annie Oakley Mystery Series. If you like a fast-paced mystery with unexpected plot twists that will keep you guessing until the very end, you’ll love this riveting historical mystery featuring America’s favorite sure-shot. 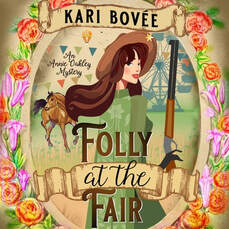 She never misses a target. But unless she can solve this murder, she’ll become one…

Chicago World’s Fair, 1893. “Little Sure Shot” Annie Oakley is exhausted from her work with Buffalo Bill’s Wild West Show. But when a fellow performer scuffles with a man who threatens her harm, she has to keep her eyes peeled. And when the heckler is found dead under the Ferris Wheel, Annie won’t rest until she proves her defender is innocent.

Before she can rustle up any clues, an old friend asks Annie to protect her young daughter. And as more bodies turn up around the grounds, she’s going to need all her sharpshooting skills just to stay alive.

Can Annie live up to her reputation and put a bullseye on the killer?

Folly at the Fair is the third book in the Annie Oakley mystery series. If you like strong heroines, Wild West adventures, and suspenseful twists and turns, then you’ll love Kari Bovée’s fast-paced whodunit. 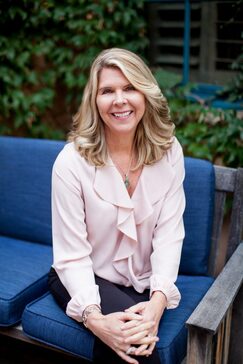 When she’s not on a horse, or walking along the beautiful cottonwood-laden acequias of Corrales, New Mexico; or basking on white sand beaches under the Big Island Hawaiian sun, Kari Bovee is escaping into the past—scheming murder and mayhem for her characters both real and imagined, and helping them to find order in the chaos of her action-packed novels. Bovee writes the award-winning Annie Oakley Mystery Series and the Grace Michelle Mystery Series, and has more ideas than time for many, many more.
​
​Connect with the author:
Website ~ Goodreads ~ Facebook ~ Twitter ~ Instagram ~ Pinterest