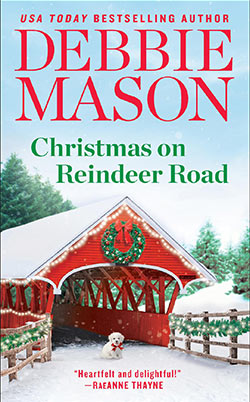 Can the magic of mistletoe bring together two busy single parents?

Mallory Maitland knows all too well what it’s like to feel abandoned, which is why she’s sworn never to give up on her two stepsons – her late husband’s children. But when the teens land in hot water, she’s got a whole new problem: how to resist the caring and incredibly hot Chief of Police Gabriel Buchanan. All Mallory wants is to give the boys a magical holiday. She doesn’t need the distraction of wondering what it would be like to kiss Gabriel under the mistletoe.

After his wife died, Gabriel left his job as an adrenaline-chasing New York City homicide detective to focus on raising his three sons. But back in Highland Falls, he doesn’t have to go looking for trouble. It finds him – in the form of a beautiful neighbor and her troublemaking stepchildren. With Gabriel’s mother-in-law looking for any excuse to gain custody of his sons, Gabriel can’t risk getting involved with Mallory, even though she’s the only woman capable of making this Christmas – and all the rest to come – his best ever.

Mallory Maitland hummed along with the Christmas carols playing on the car’s radio as she took the long way from Atlanta to Highland Falls, North Carolina the day after Thanksgiving. Despite her best friend living there, she wasn’t anxious to return to her hometown. For years, she’d done her best to avoid Highland Falls. Except now she no longer had just herself to think about.

She glanced in her rearview mirror at Oliver and Brooks, her late husband, Harry’s sons, who were no doubt silently plotting how to get back at her for ruining their lives. If they knew how difficult it had been for her to accept the job offer from Highland Falls’ mayor, they might take some pleasure in today’s move from the big city to the small mountain town.

Instead of blaming her and burning holes into the back of her skull with their resentful glares, they might want to take a good, long look at themselves in the rear-view mirror. They were the reason she’d lost six of her seven clients at Aging Awesomely, her newly formed senior care company. They were also the reason her landlord presented her with an eviction notice two weeks ago.

But did she tell them they were to blame? Remind them how often she’d warned them what could happen if she kept leaving her clients to meet with their overbearing principal? Or how often she’d told them that the next time they invited half the school to their apartment when she wasn’t home, the building’s manager would kick them out and good luck finding another one without a reference?

No. She didn’t blame them or give them an I-told-you so lecture. She wanted to, but she couldn’t bring herself to do it. And the reason she couldn’t was because, no matter how difficult they’d made her life these past two months, she understood why they hated her and acted out. They’d needed a scapegoat for the crummy hand life had dealt them, and she was it.

Their mother, Harry’s second wife, had given up her parental rights in exchange for half Harry’s fortune when Brooks was born. Mallory hadn’t been around then. She’d been fifteen at the time. Harry wouldn’t make the fateful decision that forever cast Mallory in the role of stepmonster until the lead-up to their wedding. He’d sent his sons to boarding school a month before the big day.

Oliver and Brooks had no idea how hard she—a woman who hated conflict—had fought to change their father’s mind, and she’d never tell them. She wouldn’t do anything to diminish Harry in their eyes. She’d gladly shoulder the blame to protect them. She knew what it was like to grow up feeling unwanted and unloved.

Yet despite her understanding and empathy for her teenage stepsons and the many weeks she’d spent applying every piece of parenting advice she’d gathered from podcasts, books, and friends, she’d come to the depressing conclusion that establishing a loving relationship with Oliver and Brooks was a lost cause. They’d never be a family, no matter how hard she tried or how much she wanted them to be.

Abby Everhart, her best friend, had told her not to lose hope, that love was the answer. But Mallory knew better. Love wasn’t enough to guarantee a happily-ever-after. Her own experiences had proven that to her time and again. Except, deep down, beneath all the hurt and pain, beat the heart of an eternal optimist. She couldn’t seem to help herself. She always looked for the bright side of life, the light at the end of the tunnel, the good in the bad.

And thinking of finding the good in the bad, she forced a smile in the rearview mirror while trying to make eye contact with Oliver and Brooks in the backseat.

Her stepsons could pass for British royals William and Harry. Almost sixteen-year-old Oliver, with his sandy blond hair providing a curtain for his eyes, looked like William. While Brooks, with his curly ginger hair and freckles, looked like Harry—the prince, not his father.

The boys also had British accents to go along with their royal good looks, which only served to make Oliver’s superior attitude sound even more superior. He had a way of making Mallory feel like a downstairs maid in an episode of Downton Abbey. Why on earth Harry had thought it a good idea to send the boys to boarding school in England, she’d never know.

When smiling and staring at Oliver and Brooks in the rearview mirror failed to get their attention, she cleared her throat. “Only ten minutes until we arrive in Highland Falls!” she said with fake cheer. She continued in the over-the-top upbeat voice despite the boys’ chilly blue stares. “Abby checked out the house on Reindeer Road, and she says we’ll love it.” She actually said the house needed some TLC but the backyard was a nature lovers paradise. Since Oliver and Brooks weren’t exactly fans of the great outdoors, Mallory didn’t think that would help her cause.

The boys shared a mutinous glance, which made her nervous. Sometimes it felt like they could communicate telepathically, and whatever they mentally shared never boded well for her.

“Okay. I get that you guys are unhappy about the move. You’ve made your feelings perfectly clear. But let’s be honest: you haven’t exactly been happy in Atlanta either. It’ll probably be easier for you to make friends in Highland Falls.”

At the insulted expressions on their faces, she realized she shouldn’t have implied that they didn’t have friends. But it was true. They didn’t. Not real friends. “I mean better friends.”

They shared another look before Oliver said, “We need to use the loo.”

“We’re not far from . . . Okay.” She folded like an accordion at Oliver’s pointed stare. “There’s a truck stop up the road.”

She reached for her Christmas-spiced latte and took a restorative sip as she continued on Highway 64 with Mariah Carey singing “All I Want for Christmas Is You” on the radio. All Mallory wanted for Christmas was for Oliver and Brooks to give her a chance. To give them a chance.

And right then, with the smell of Christmas in her nose, the taste on her tongue, and the sound in her ears, the answer came to her. She knew exactly how to solve her stepparenting dilemma.

Love wasn’t the answer; Christmas was.

Click HERE to read Chapter One in its entirety!

Debbie Mason is the USA Today bestselling author of the Christmas, Colorado series and Harmony Harbor series. Her books have been praised for their “likable characters, clever dialogue, and juicy plots” (RT Book Reviews). She also writes historical paranormals as Debbie Mazzuca. Her MacLeod series has received several nominations for best paranormal as well as a Holt Medallion Award of Merit. When she isn’t writing or reading, Debbie enjoys spending time with her very own real-life hero, three wonderful children and son-in-law, two adorable grandbabies, and a yappy Yorkie named Bella.