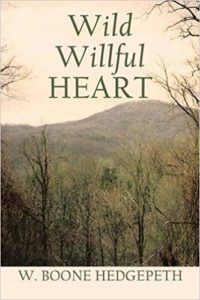 Take a wild megalomaniacal trip into the American spiritual and Cultural Revolution of the 1960s-1990s, as a young southern man gives fresh perspective to the propaganda, bad marriages, a collection of strange gurus and some bizarre mystical places. For many years, author W. Boone Hedgepeth was a magnet for unusual occurrences of an ethereal nature which vigorously affected the world around him. Suffering a life threatening illness and after a near death experience, Boone goes on an adrenalized journey from the American south and across the country seeking answers. Here, force of will and prayer are the proven best weapons against very unusual circumstances. Literally seeking the face of God, the author plunges into the magical medicine of his native ancestors, the new age metaphysical movement, Christian fundamentalism, and other wild and life-changing experiences before coming out of the fires to the other side.

There is so much I want to touch upon regarding Wild Willful Heart. Please be patient with me as I share my thoughts on many aspects of Boone’s story.

I’m not too familiar with Mormonism (The Church of Jesus Christ of Latter-day Saints). I grew up in a Pentecostal church and my minister only spoke of our beliefs. While reading Wild Willful Heart, I learned both religions believed in the power of prayer and the Holy Spirit.

However, Boone disclosed some bizarre facts about Mormonism that had me shaking my head.

1.) For over 100 years, Mormons believed there were six foot tall beings living on the moon because an early church leader named Orson Pratt had said so. This was debunked after the moon landing.

2.)Mormons believed their “magic underwear,” which had Masonic markings on it, was knife proof and bulletproof. It had to be worn everyday to protect the righteous wearer from evil.

I’m not sure why anyone would believe such nonsense but, then again, atheists wonder why people believe in GOD so to each their own, I guess.

Like many people, Boone questioned organized religion. He used words like hypocrite and hypocrisy more than once. I can understand why he used these key words. I’m not saying all churches or church members are hypocrites. What I am saying is I can fully understand why some people are losing their faith in GOD, churches, and religion as a whole.

As Boone embarked on his vision quest, he discussed troubling times from his past. At thirteen, he began to hear voices in his head, which instructed him to end his life. He assumed every teen experienced these voices as they transitioned into adulthood. As a teen, I began hearing voices too. I didn’t speak of them. The voices are scary. You feel alone, afraid of your own mind. Like Boone, I also live with bipolar disorder, depression, and suicidal thoughts. I truly believe MORE people should discuss mental health because we need to end the stigma of mental illness. If we don’t, if we shame those with mental health problems, people who are suffering won’t seek help. A person who thinks there’s no help, no understanding, will end their life. I, personally, don’t want to see that happen. Everyone needs the opportunity to feel safe to discuss their issues, to get the help they need, and to live a long, happy life.

As for Boone’s experience with drugs and alcohol, it happens with most teenagers. IMHO, I don’t believe illegal drugs and liquor should be consumed if you’re battling a mental health problem. It can and will make you more self-destructive. Boone discussed this during one of his flashbacks. Boone, I applaud you for being so forthcoming with your struggles with mental illness, mental health hospitals, liquor and drugs.

Many people have claimed to see sprits and UFOs. I’m not sure if spirits are real or just a play on eyes, a figment of our imagination. However, if you believe in life on other planets, then the possibility of UFOs is plausible. Maybe, just maybe, spirits are real. And maybe, those sightings of UFOs do hold some merit as well. Bravo Boone, you made me stop and evaluate their validity.

Vision quests are popular because many people seek enlightenment, a connection to all things. They want to find answers, peace, or a purpose in life. Boone went on several and he spoke of the physical, emotional, and mental toll it took on him. It changed his life; it was cathartic. After I read about his time on the mountain, I began to wonder if I could benefit from one. Maybe after reading his trials, you’ll consider participating in one as well.

You don’t have to be a religious person to read Wild Willful Heart. You only need to have an open mind and few hours to spare on this (under) 300-page story. 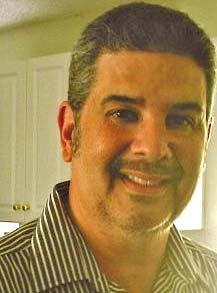 W. Boone Hedgepeth studied history at the University of South Florida for four years. He spent 35 years in business and copywriting, with 11 years as a lay minister in his free time. His favorite places are the mountains of North Carolina, and any good waterfront restaurant in South Carolina. His hobbies include classic cars and RVs, listening to swampy blues, and reading the Bible. W. Boone Hedgepeth lives with his wife on the coast of South Carolina.