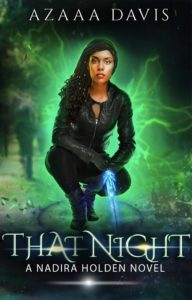 All Nadira Holden wants is to preserve the last of her soul and create a new life free of magic, demons, and war.

Her involuntary bond with a succubus makes her desires impossible. The threat of this disgruntled demon possessing her urges Nadira to find the succubus’s missing body.

Nadira’s only hope of avoiding demonic possession lies with Derek, the only demon she can tolerate without slaying. Except his hands are full trying to secure his recently-inherited title of prince. Desperate, Nadira agrees to help Derek secure his title by experimenting with the deadly magic they once generated in exchange for his aid in her investigation.

To untangle herself from the evil that surrounds her, Nadira must be willing to betray her friends and get cozy with her enemies. She may even have to do the unthinkable: break the peace treaty that allows demons and humans to coexist. If she can’t toss aside her scruples, Nadira may not make it out of this ordeal with her soul intact. 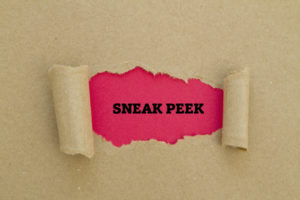 Below is the first scene of That Night — book two in the Nadira Holden, Demon Hunter seres. Enjoy this sneak peek and pre-order your copy today!

Please note this writing sample is provide before the final round of professional editing.

He pressed his lips against hers. His were thin, chapped and puckered. He began moaning immediately. His head tilted from left to right and back again. His mouth opened greedily. Long, thin and forked, his serpentine tongue licked her face from lip to brow, cheek to chin. And, she allowed it.

Nadira looked away as her stomach turned. Despite the biting cold waiting for her outside, Nadira pushed away her full cup of hot green tea. Sadly, she realized she would have to find a new hangout spot or accept the fact that demons were now sought after as lovers to teenage bookworms. And with those two unfortunate choices, Nadira stood from her cushioned lounge chair, stretched, then began walking out of Great Escape—her favorite bookstore—with her coat in one hand and a small, hardcover novel titled A Little Princess in the other.

“Miss, miss!” Nadira heard someone shout from behind her. “You forgot your phone!”

She turned and came face to face with the reason she was leaving.

“Thanks,” she mumbled as she carefully took the phone, successfully avoiding skin to skin contact.

The tall, slumped demon narrowed his eyes when he saw her discomfort. His pale skin had a blueish-green undertone that became more apparent when he clenched his jaw in annoyance. When Nadira rolled her eyes and sucked her teeth at his attitude, he swiftly grabbed her wrist and pulled her in close.

Do not kiss me.

“You’re next,” he said. Then, he licked his barely-there lips.

Nadira jerked backward and accidently bumped into the arm of someone sitting close by. From the sound of dishes clinking, the aroma, and someone hissing in pain, she knew hot coffee was spilled.

Before she could turn around to make amends, Nadira heard someone say, “Sanford?” in a soft, timid voice. The young woman that actually enjoyed making out with the snake-tongued Sanford approached them hesitantly. “What’s … Um. What’s going on, bae?”

They all stood in a line facing each other due to the narrow aisles caused by a small room filled with oversized armchairs.

Shaking her head, Nadira tried to walk away again. She was a hammer—ready to fix problems the only way she knew how—and Nadira saw all demons as rusty, exposed nails in need of a beatdown. As riled up as she was by his cryptic attempt to threaten her, she knew a fight in a bookstore was not the way to go. She reminded herself that she was retired now and demon hunting was illegal.

The strained moment was cut by an unlikely request, “If you bump me with your beautiful butt one more time, you’re gonna hafta gimme your number.”

This man with a coffee stained shirt and a half empty cup stood. The interruption somehow broke the tension and they all relaxed their rigid stances a bit. The flirtaious man’s commanding presence reminded them that they were in a crowded bookstore and had no business causing a ruckus.

He pushed past the rest of them, and his girlfriend mumbled apologies in his wake as she was pulled along. A minute later, they were out of sight in the cozy, cluttered bookstore. Nadira hoped they were gone.

She felt an instant flash of pain in the palm of her hand in the same moment she heard the sound of her expensive phone’s screen cracking. Jaime is going to kill me. This made the second cell phone she would need replaced in the six weeks since she started using the minicomputers to make calls and look up “what would millennials do?”

Holding up her damaged phone, Nadira said to the guy wearing his coffee, “My number won’t do you any good today.”

She couldn’t hold back her look of utter frustration. He stood there looking at her, really looking at her, as if he could see her past and make sense of it. He nodded gravely, presumably accepting her—aggression, clumsiness, and all.

“I’ll go easy on you since you’re clearly not having a good day,” he offered.

Feigning a look of amazement, Nadira said, “That’s big of you after my blatant attempt to come on to you.”

Matching her mocking tone, he replied, “I can tell you’re clumsy as fuck.”

Nadira laughed. The sound erupted from her—loud and abrupt enough to turn a few heads. She quickly covered her mouth with her uninjured hand. Then, she dropped her hand just as quickly and allowed herself to continue laughing wholeheartedly.

“I—” She tried again when her laugher tampered off. “I think I needed that. Thanks.” She wiped tears from the corners of her eyes while smiling at him. She was intrigued now.

The animated face he made was filled with reluctant regret. “You’re gonna need to buy me a replacement cup of joe before this gets personal.”

She swung around to face the front of the bookstore and headed for the makeshift coffee stand.

Nadira got in line to order Mr. Tall-and-Handsome whatever he wanted. She wasn’t sure if it was her hunter instincts or feminine intuition, but she knew he would follow her. In fact, she felt the exact moment he stepped in line behind her. The butterflies in her stomach fluttered and the goosebumps on her arms rose. Nadira’s full lips lifted into a satisfied grin. She was grateful he couldn’t see her face.

There was only one customer ahead of them. After the young woman in front of her with pink-streaked blonde hair ordered herself a five-word, over-sugared, over-foamed, over-caramelized drink, Nadira stepped up to the register. The cashier was running a one-woman shop as she took care of both book purchases and coffee orders.

To stay relevant with all the trendy cafes springing up, the owner of Great Escape added a high-end coffee maker next to the cashier’s stand. The big, shiny piece of machinery seemed out of place in the dusty bookshop lined with shelves that overflowed with classic literature.

“Hi, sweetie. What are you having today?” the cashier asked looking a little frazzled.

Nadira took a dramatic step to the right and presented her new friend.

The cashier paused as she visually devoured the well-toned man of Chinese descent Nadira had presented.

“You willing to share this one, hon?” she asked Nadira.

“Not a problem, not a problem at all,” the cashier said while leaning forward and batting her eyelashes. “And, your name for the order?”

Nadira chringed, hoping she wasn’t coming on as overtly as the cashier.

“Shaun,” he answered. The flirtatious cashier then tilted her head to make eye contact with Nadira as if to say ‘now you know too.’

While Nadira and Shaun looked at each other, the cashier continued to try her luck, “You gotta number for me, handsome?”

Nadira couldn’t help the frown that appeared as she wondered why the eager cashier didn’t care if he was her boyfriend or not.

All three of them smiled in the awkward silence that followed the cashier’s question, but Nadira was sure it was for three very different reasons. Her smile was more of a baring of teeth as she subconsciously displayed a nonverbal warning. Shaun might have been enjoying the attention of two women. It was too soon to tell what his preferences were. And the cashier—plump, curly-haired, and older than them by at least ten years—saw nothing wrong with hitting on customers while working.

“Will this cover it?” Between two fingers, Shaun held up a folded five dollar bill.

That was Nadira’s cue to play the role of sugar mama for a moment. She stepped into his personal space, swung her hips, and gently bumped him out of the way. Shaun stepped to the left with a chuckle. Nadira quickly pulled out her wallet and slammed her five dollar bill onto the counter. The cashier flinched, her come-a-little-closer look melting away.

“Aren’t you an eager one?” the older woman asked, chidingly. In a stage whisper, she added, “It’s not that attractive, you know.”

Nadira simply let her eyebrows do the talking. Her look said ‘are you serious?’ with all the sass she could muster while biting her tongue.

Perhaps sensing that the lightheartedness of the moment was over, Shaun chimed in, “I’ll take it to go.” 2 Responses to That Night: A Nadira Holden Novel by Azaaa Davis (Book Showcase)